The snow has fallen and the temperature has dropped. These are sure fire environmental cues that tell my body and brain to start the oven and ready the freezer for the cold long winter ahead. People joke about Canadian winters because that’s all you can really do. Take those winter days as they come because you can be sure that you won’t be wearing shorts for at least seven months out of a year. In the Great White North we turn to comfort foods and long slow braising in the oven and then finally; the Christmas baking.

It’s funny. You don’t realize how important those physical cues are until they are gone. When we lived in Australia, December just kept on getting hotter and hotter. Not only did it not feel like ‘Christmas’ to me but there was no way I was going to bake with the weather that hot. Could you imagine roasting a turkey when it’s 40 C outside? Some people do and I did have a go at cooking a ham on the BBQ but the best Christmas we had there was when we embraced an Aussie tradition…the Christmas seafood feast. In Western Australia Christmas coincides with Rock Lobster season. For our feast I took advantage of the fresh seafood selection and also bought a kilogram of fat prawns and two dozen oysters which I made two ways. I cooked that all on the barbeque and it was fabulous. Still, it wasn’t home.

Our first Christmas back home in Saskatchewan was magical. First of all there was snow! (hard to believe now we were excited to see it back then) We were able to catch up with so many relatives and eat all of our favourite foods (including goulash!). It usually is my job to do most of the sweets while mom and my sister make appetizers. Recently my youngest sister has been contributing her portion in chocolate bark.  Mom still keeps her French Canadian Christmas tradition alive because she makes the Tourtière. She doesn’t make a large pie, but small individual sized pies that we eat on Christmas Eve when we get home from midnight mass. I’m not really sure why we eat so much at 2 am but I guess it’s a Christmas tradition. Besides, we need all that stamina to open presents and stay up until 4.

I had never made Tourtière before so I had to call my mom and ask what she put in her version. Apparently she does a pork/beef mix and adds in mashed potatoes, sage, and thyme. Basically poultry seasoning. Just because I asked her didn’t mean I would take her recipe to heart and with me being me I decided to ‘amp’ it up a little bit. What resulted was probably the best (and cutest) pie I’ve ever made. 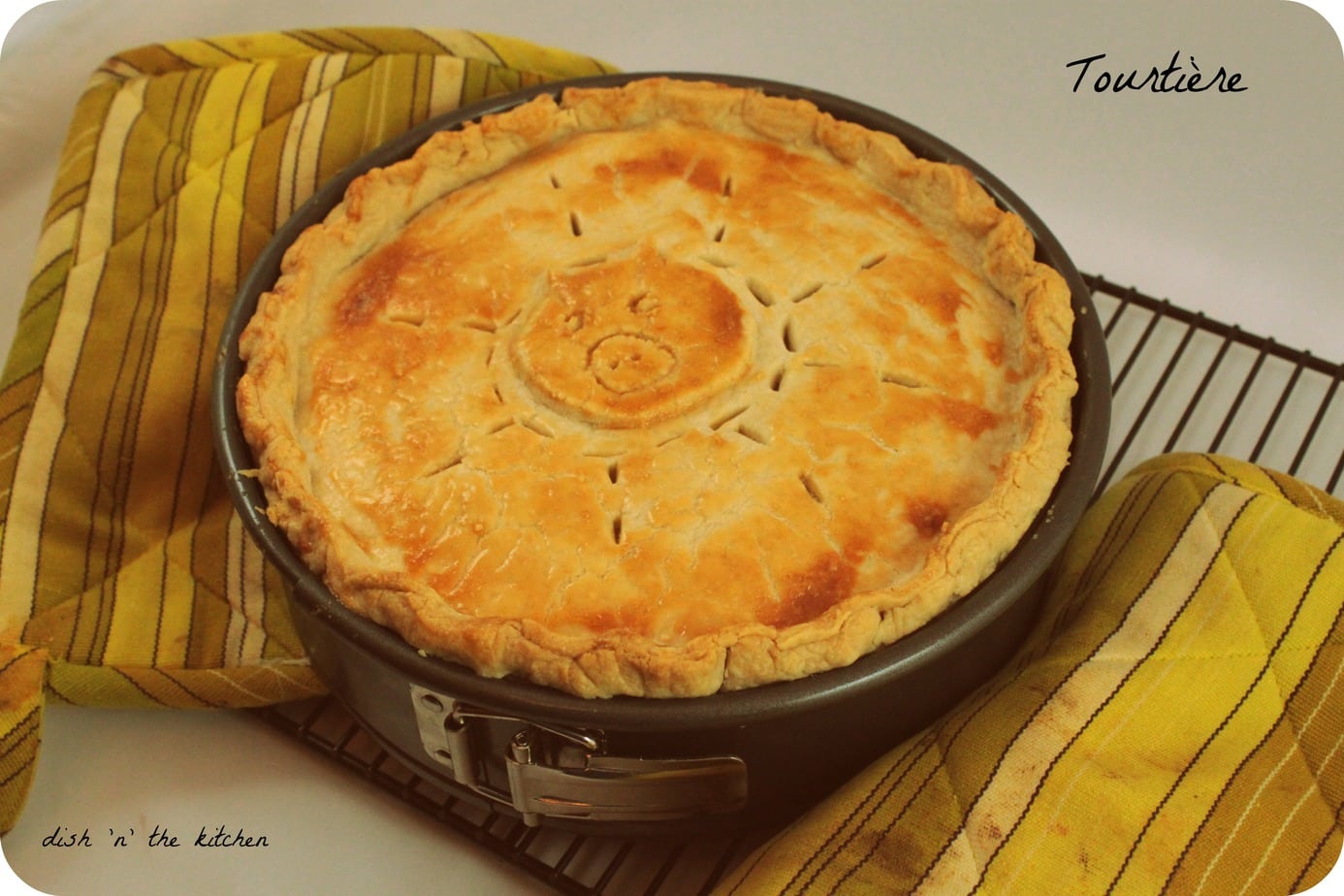 As you can see I decided to make a huge tourtière and celebrate pork by using all lean pork mince. I was worried it would be a touch rich but the pork had a really nice fat content. I browned it and then added thyme and ground sage, as well as a half teaspoon of cloves. I got worried for a moment that the cloves were too overpowering but after everything was assembled it turned out to be the right amount.  I cooked up a pot of potatoes and mashed them while in another pan I browned three sliced onions. When they were done I added them to the potato mash. To the pork, I added about a third of the potato mash for the mixture that went in the bottom of my pie. I had some cauliflower mushrooms left over so I carefully laid them out in a thin layer over the meat and potatoes.  Then, I took the rest of the potatoes/onions and made them into the top layer of my pie. I didn’t really mean to do a layered pie, it kind of just happened as I cooked. It is definitely not a traditional Tourtière. 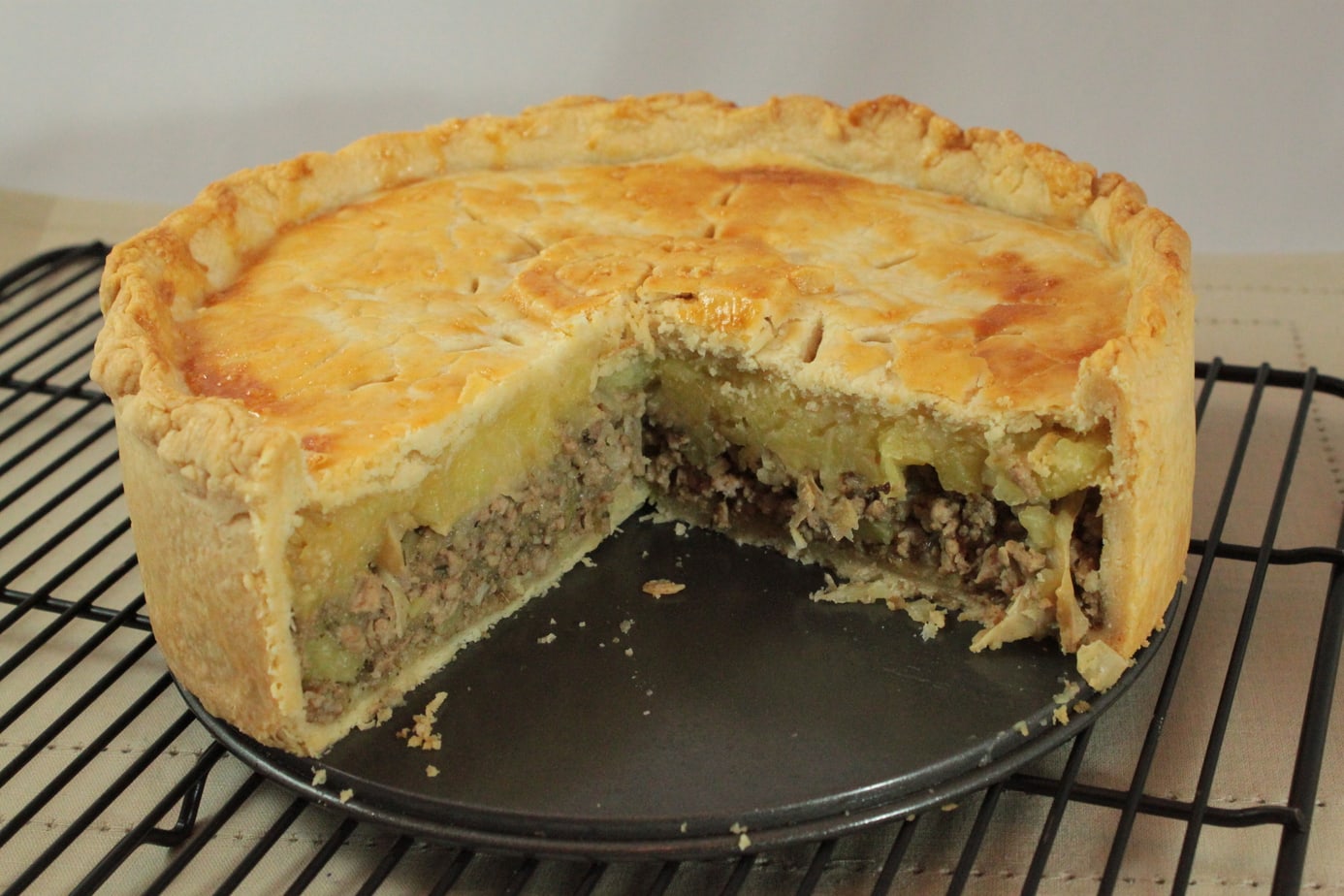 But it was oh so good! I’m thinking about making one for Christmas now, instead of bringing sweets. 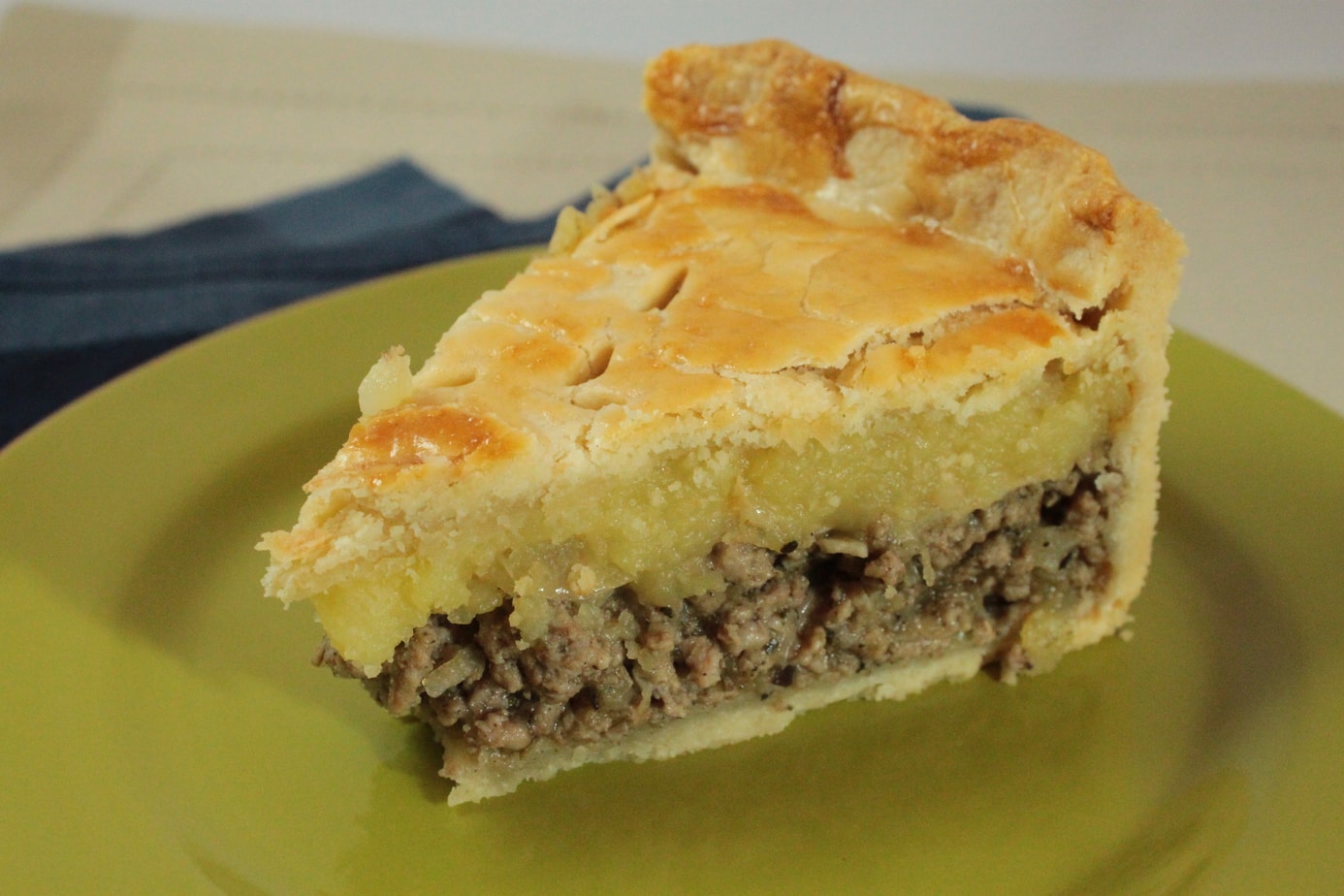 Are you hungry for more Canadian Christmas traditions? Check out The Canadian Food Experience Project which began June 7 2013. Where we (the participants) share our collective stories across the vastness of our Canadian landscape through our regional food experiences. We strive to bring global clarity to our Canadian culinary identity through the cadence of our concerted Canadian voice. This month our theme is A Canadian Christmas: A Regional Tradition though in my particular case, Tourtière is more of a cultural tradition.