During these long grey days of winter I have really come to miss the sunshine and heat of Western Australia. If we were still there we’d be picking oranges for fresh juice every morning and making lemonade with the fresh lemons. It’s January. In Calgary. Not much hope of finding sunshine unless…you make it yourself!

It is now ‘citrus season’ in Calgary and by that I mean this is when we get the best citrus imported from warmer climates. This week Co-op had Meyer Lemons. Little bags full of tiny spheres of sunshine, just begging to be made into cakes, muffins, gelato, and tarts. They aren’t as tart as regular lemons, their flavour is more of a cross between lemons and oranges. I found that out the hard way. Last year I decided to make a Lemon Meringue Pie using the Meyer Lemons and with the meringue we really found the pie was too sweet. There just wasn’t that ‘tang’ we were used to.

In keeping with my recent experiments with recipes from the latest Bon Appetite, I decided that the Lemon Honey Tart with Salted Shortbread Crust would be a great way to use up the whole bag of Meyer Lemons. These tiny lemons have a very thin skin and if sliced thinly, can be used whole (lemon, pith and skin) in the recipe 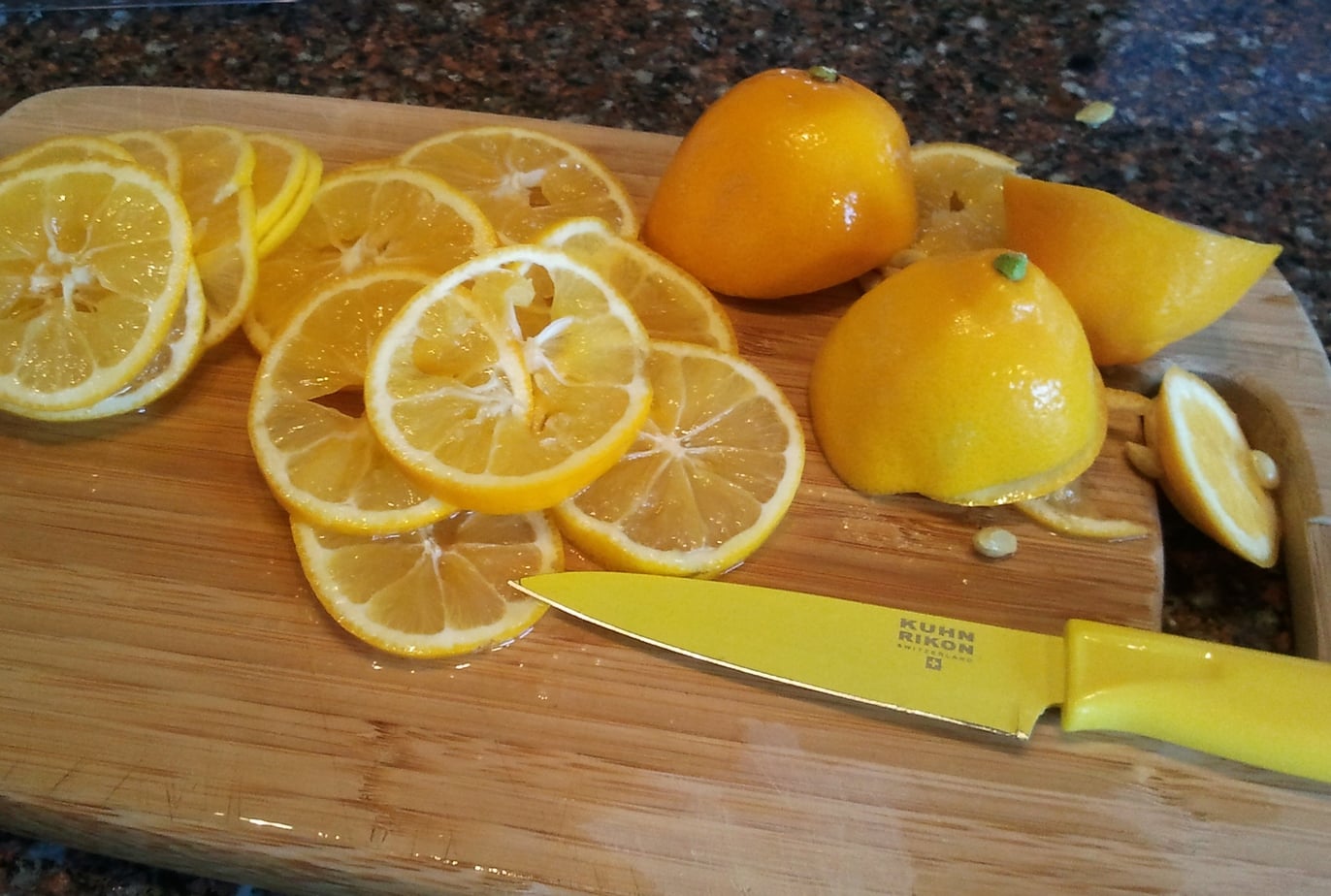 I had a bit of a brain fart at this point. I had read the recipe earlier and decided that I needed to finally invest in a food processor. I was thinking that I would be able to get the thinnest lemon slices that way. When I re-read the recipe, I saw that they suggested a mandoline to get the slices as thin as possible so out came the mandoline. I gave it a try, but the slices weren’t coming out as nice as I liked so I ended up just using a knife and hoping the slices were thin enough. When combined with the sugar, honey and lemon zest the slices were meant to ‘marinate’ for about 45 minutes. I had to hope that they would be edible.

I was determined to use that new food processor today. So, in goes the sugar and butter for the shortbread crust. I pressed the button and…nothing! Did I put it together wrong? No, I mean, it’s not rocket science. It’s a kitchen appliance! I spent a good 20 minutes re-fitting the bowl and lid and changing power outlets and still nothing. So I dumped it all into the bowl of the kitchen aid mixer and made the shortbread crust in that way. After the butter and sugar you add the dry ingredients and keep mixing until the mixture makes pea sized lumps. 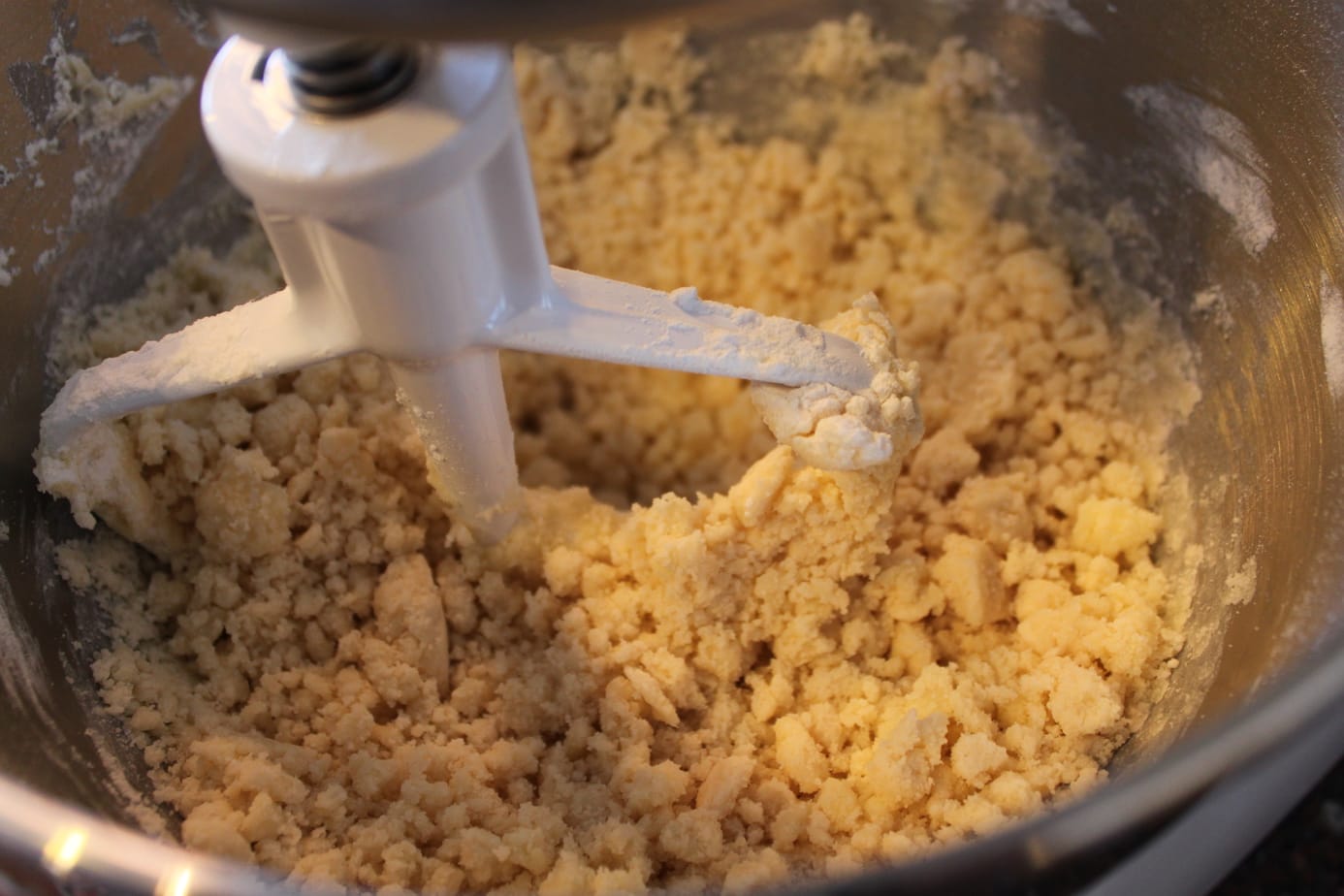 Turn the dough out into a prepared 8 inch spring form pan and press it down and up the sides of the pan. I like this method of making crust, it’s far easier than having to roll it out and fit it in the pan. 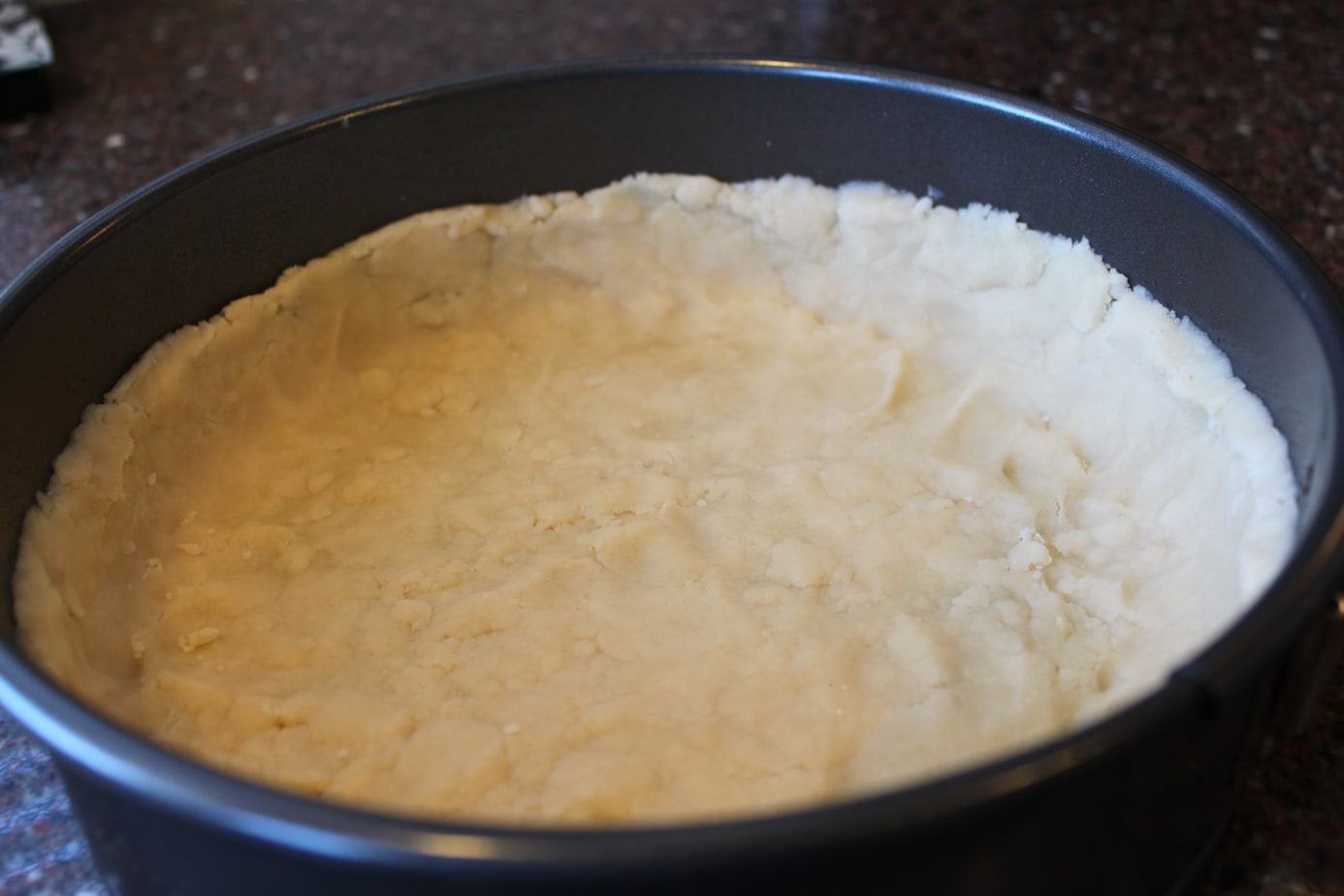 Bake until golden, about 25-30 minutes. About 20 minutes into that baking time I prepared the filling as it is important to fill the baked crust while it is still warm. 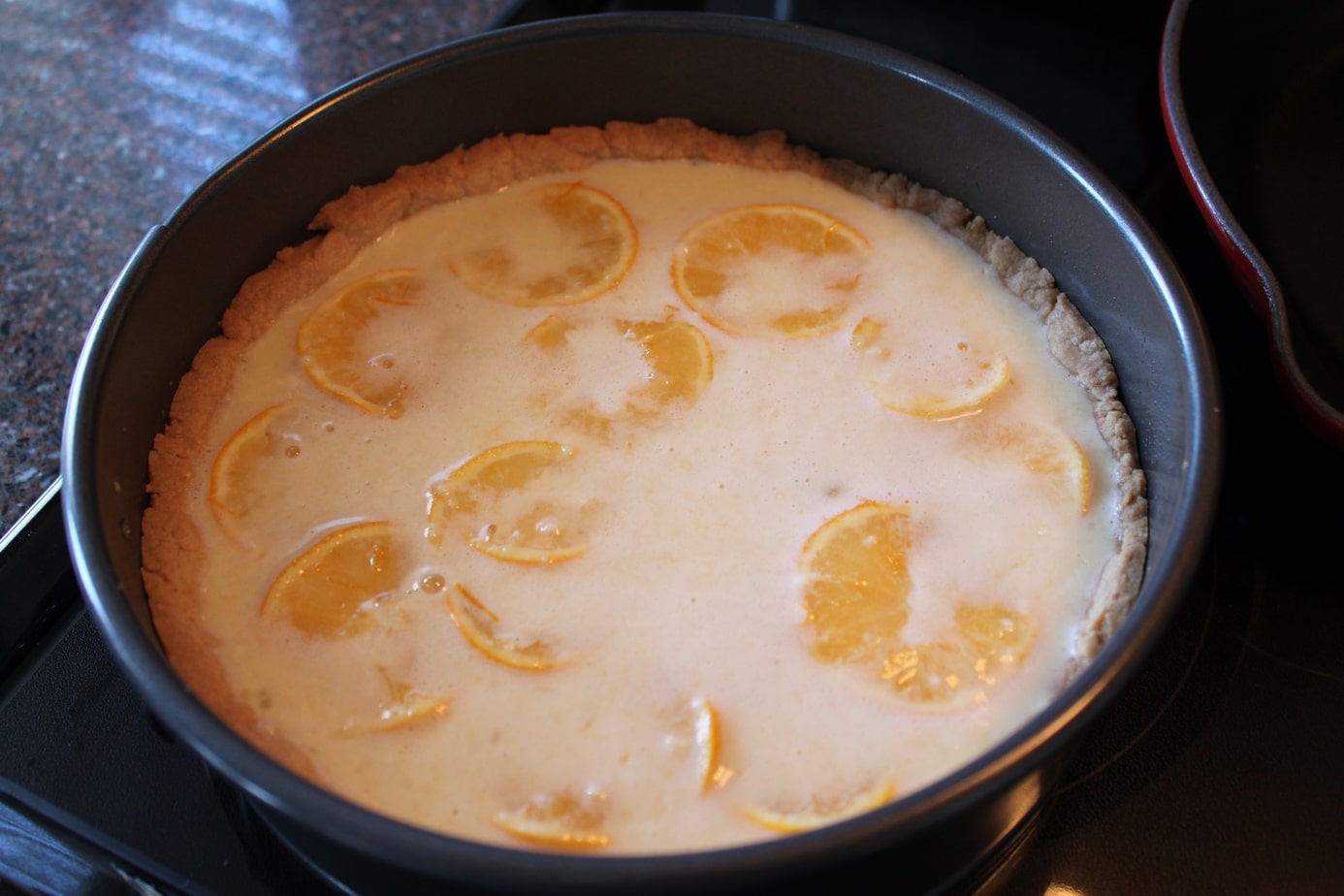 Back in the oven it went  for another 25-30 minutes until set. I can not stress the importance of this…I thought it was taking forever for my tart to set and I probably had it in the oven for at least ten minutes more than  I should have. The result, a nice crack down the middle. I’m sure it’s still edible. Luckily I grabbed a photo right out of the oven so it looks pretty professional even though it’s not! 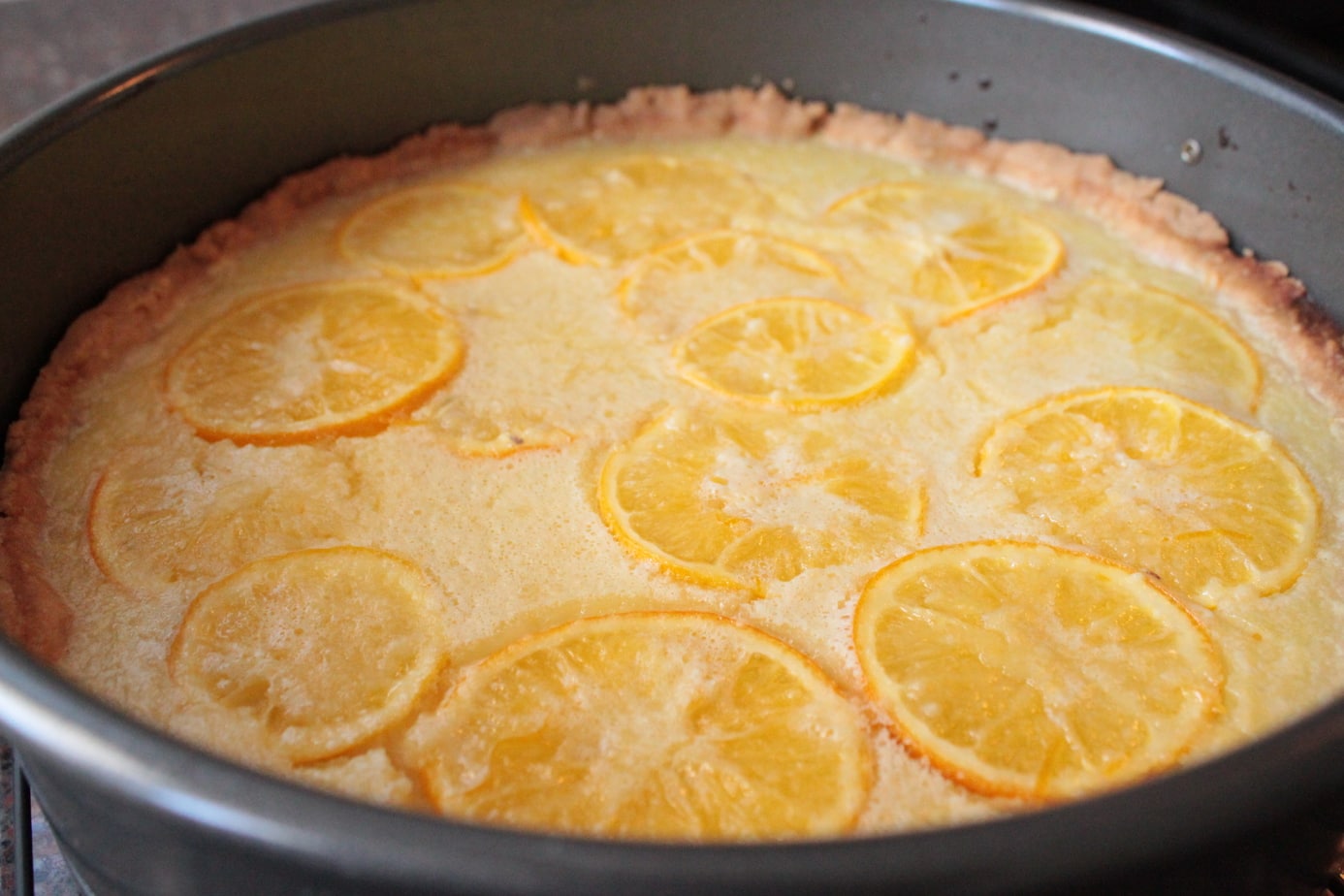