Mango Tart and Some Memories of Travelling Afar

I didn’t try my first mango until I was 32. I know I probably led a sheltered life but then have you ever tried to find a decent mango in Canada? It is possible but you sure have to know what you are looking for and I obviously didn’t.

Well. Until that year I had never been out of Canada unless you count the quick day trip to Minot, ND when I was a teenager. Back before you needed a passport to cross the border. Those were the days.

The year I was 32 was a big year for our little family. That was the year of our first family vacation to an all inclusive on the West coast of Costa Rica (but not during mango season). Then Hubby took a business trip to Perth, AU to make some connections as we were planning on moving the family there. Later in January, just before I turned 33, I accompanied him on a trip to Egypt. We mostly visited Alexandria but we did have a few days in Cairo. 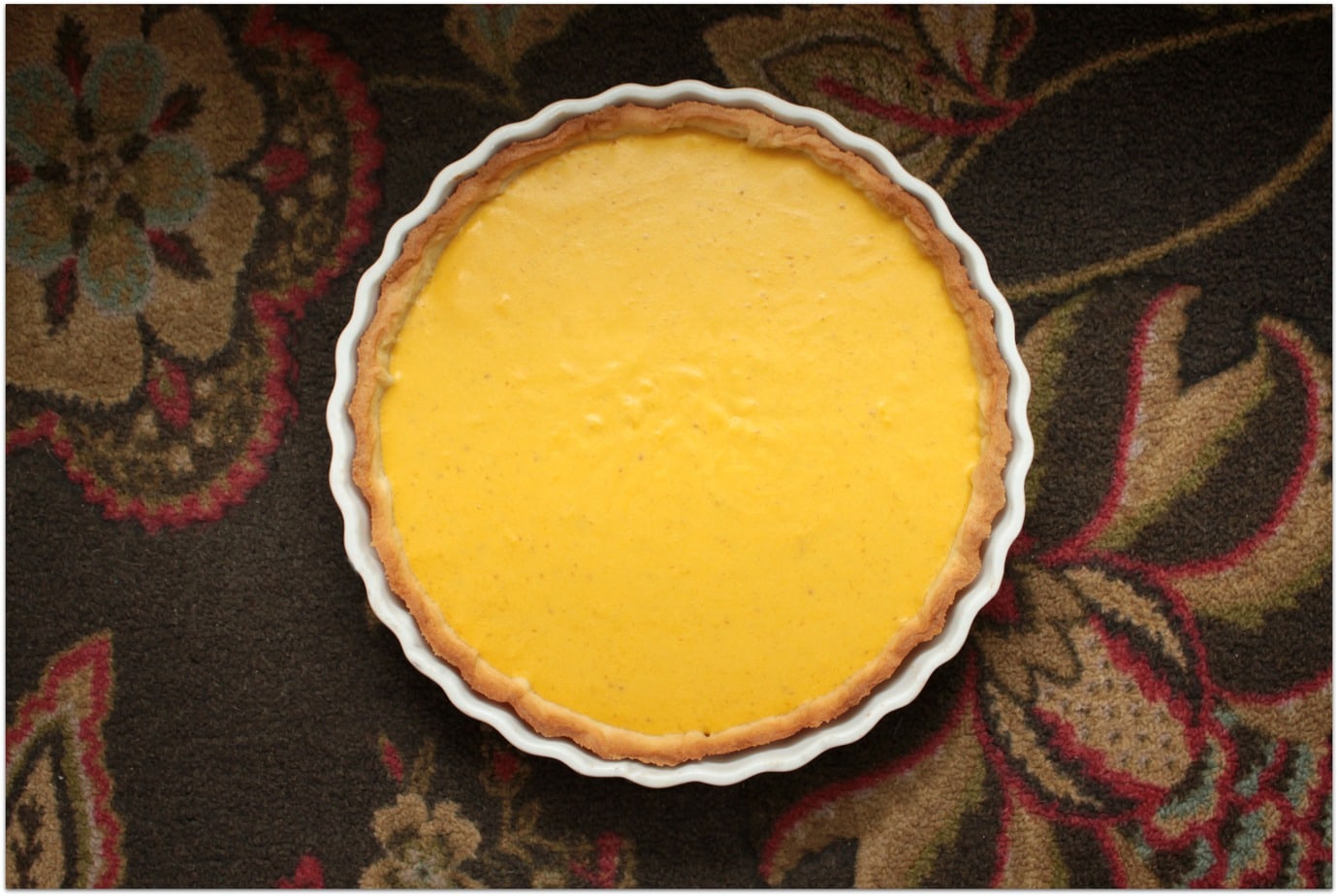 I really wish I was food blogging back then because I could have written down the food memories and experiences as they were fresh in my mind. I ended up doing some private touring with a female tour guide while Hubby was working and it was marvelous! We would tour for a bit, then break for lunch. One day we went to the Fish Market, one of the best restaurants in Alexandria. We picked out our fresh fish and specified how it was to be cooked then were given small plates to share as we waited. In addition to the pita & hummous, we had deep fried whitebait and I ordered my very first mango drink. I was expecting some sort of smoothie, but instead was given what was basically a glass of mango purée. It was difficult to drink and quite stringy but it was oh so refreshing…I was instantly hooked. From then on I would order mango drink only! When we arrived back in Canada, the only mangoes available were rock hard, odourless, Mexican mangoes. Or, as I like to call them, ‘Canadian Mangoes’.  I tried the flash frozen mangoes but found they were a bit chalky in texture so then I just gave up. 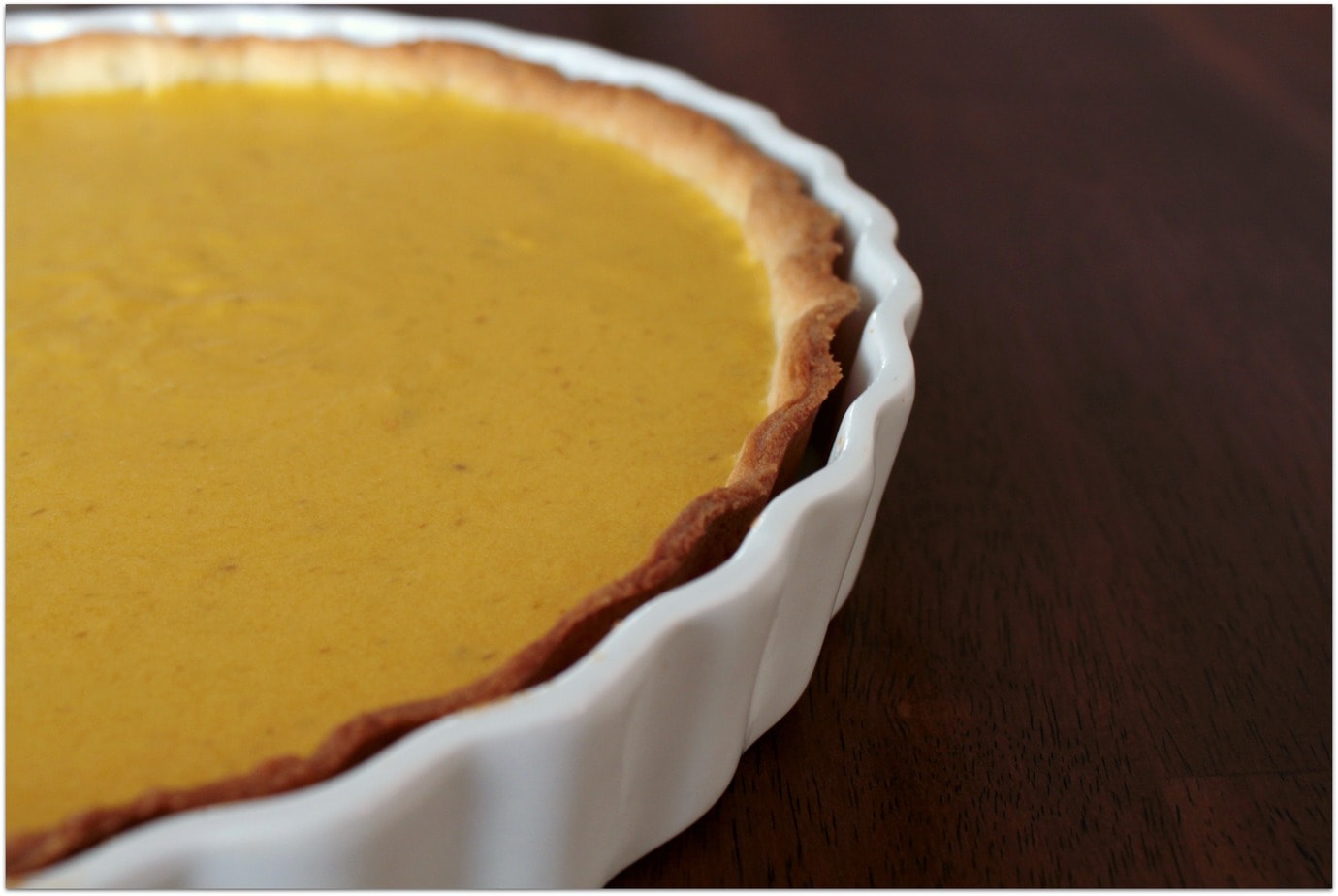 Then, in 2008 we moved to Perth, Australia. Let me tell you everything tastes better there…it’s all grown locally and if it isn’t, it only has to travel a couple hundred of kilometres instead of across whole continents. Gosh, even the carrots taste better. But back to the mangoes…Australia has a really lengthy mango season stretching from late September to April and grows at least nine types of mangoes. It is mango lovers utopia and there were many days where I ate at least one per day. They even have the large R2E2 mango which can be the size of a small cantaloupe (or rockmelon if you are an Aussie).

Eating a juicy, ripe sweet and sour mango with it’s juices dripping down my arms makes me feel like I’m eating liquid sunshine. It just plain reminds me of summer and warmer weather which I really need right now.  So last week I broke down and bought a case of ‘Canadian’ Ataulfo mangoes (a cultivar from Mexico) and you know, they weren’t half bad! For the first couple of days we just ate them as they were, au natural but later in the week they started to get wrinkly and found their way into the fridge.

I eventually found a recipe that would use up the last four dodgy mangoes, this really amazing Mango Tart from Raspberri Cupcakes. I found the mango curd really easy to make, though I did change the crust a bit by omitting the coconut. 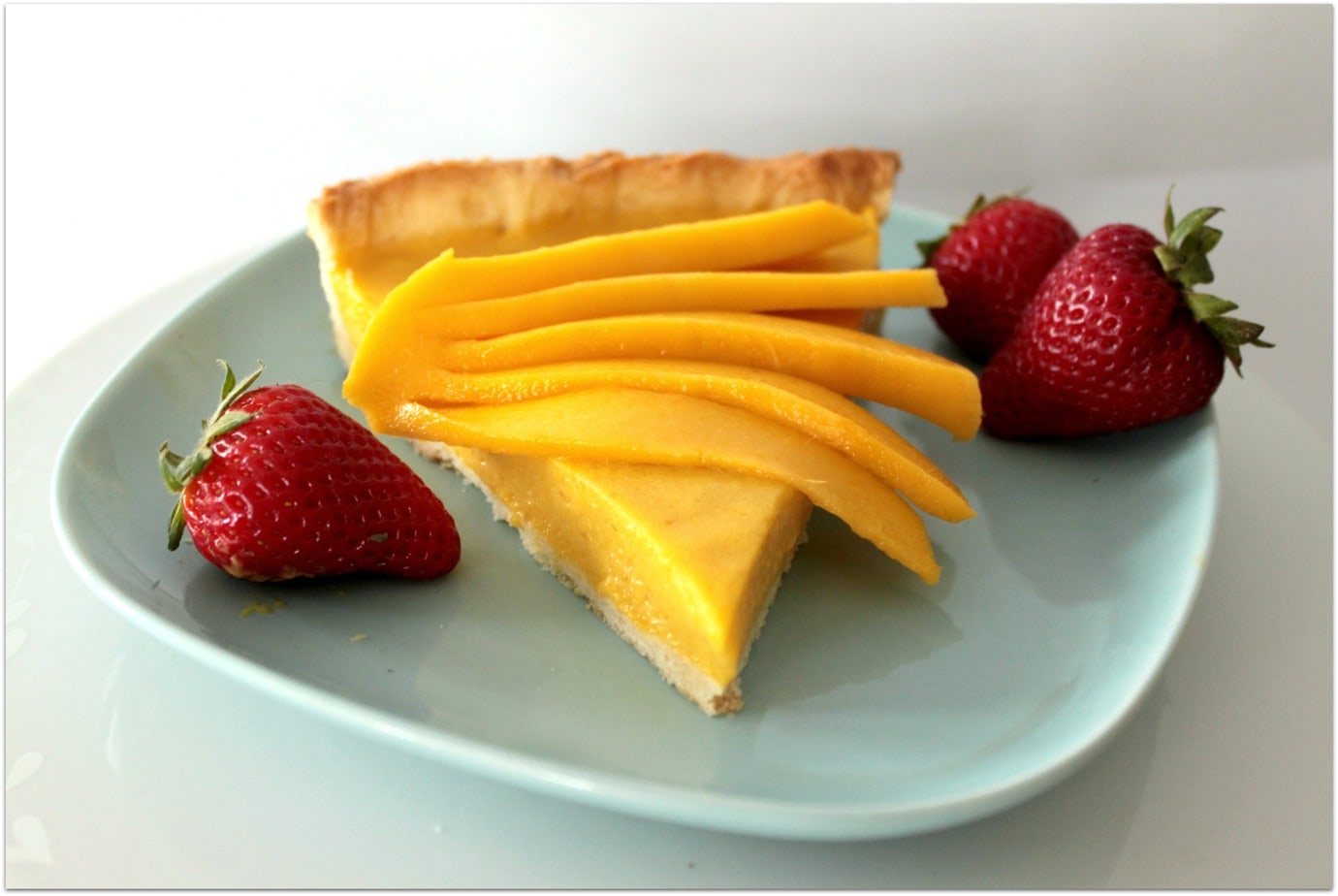 Mango Tart (Adapted from Raspberri Cupcakes)
For the crust:
3/4 cup (about 105g) plain/all-purpose flour
100g (7 tbsp) cold butter, cut into cubes
1/3 cup (about 40g) icing/confectioner’s sugar
1/4 tsp salt
2tbsp cold water
Whir it all up in a food processor until it comes together. Wrap in plastic and refrigerate until needed. To make the crust, remove pastry from the fridge and roll out to about 1/4 inch thickness. Roll back onto rolling pin then drape it across a 23cm (9 inch) loose bottomed tart tin. Form the pastry to the sides then gently line the pastry with foil and fill with beans or other weights. Bake for 15 minutes at 375 F then remove the foil and beans and bake for another 5 minutes or until golden. Let cool.
For the Curd:
1 1/2 tsp powdered gelatine softened in 2 tbsp cold water
1-4 ripe mango(es) (about 450g/15oz), peeled, pitted, cut into 1/2-inch pieces
1/3 cup sugar
3 tbsp fresh lime juice
Pinch of salt
4 large egg yolks
60g (1/2 stick) butter, cut into small pieces
Purée mango, sugar, lime juice, salt together in a food processor. Add the yolks then process more and add the softened gelatine and process again. If you think you need to, strain through a sieve. I didn’t do this and the curd had a wonderful texture. Put mixture in a large metal or glass bowl.
Set bowl over saucepan of simmering water (do not allow bottom of bowl to touch water); whisk puree until gelatine dissolves, mixture is thickened and thermometer registers about 80°F( 170°F), about 10-15 minutes. Remove bowl from heat. Whisk in butter 1 piece at a time. Cover and chill to room temperature, then pour into prepared crust and refrigerate overnight. 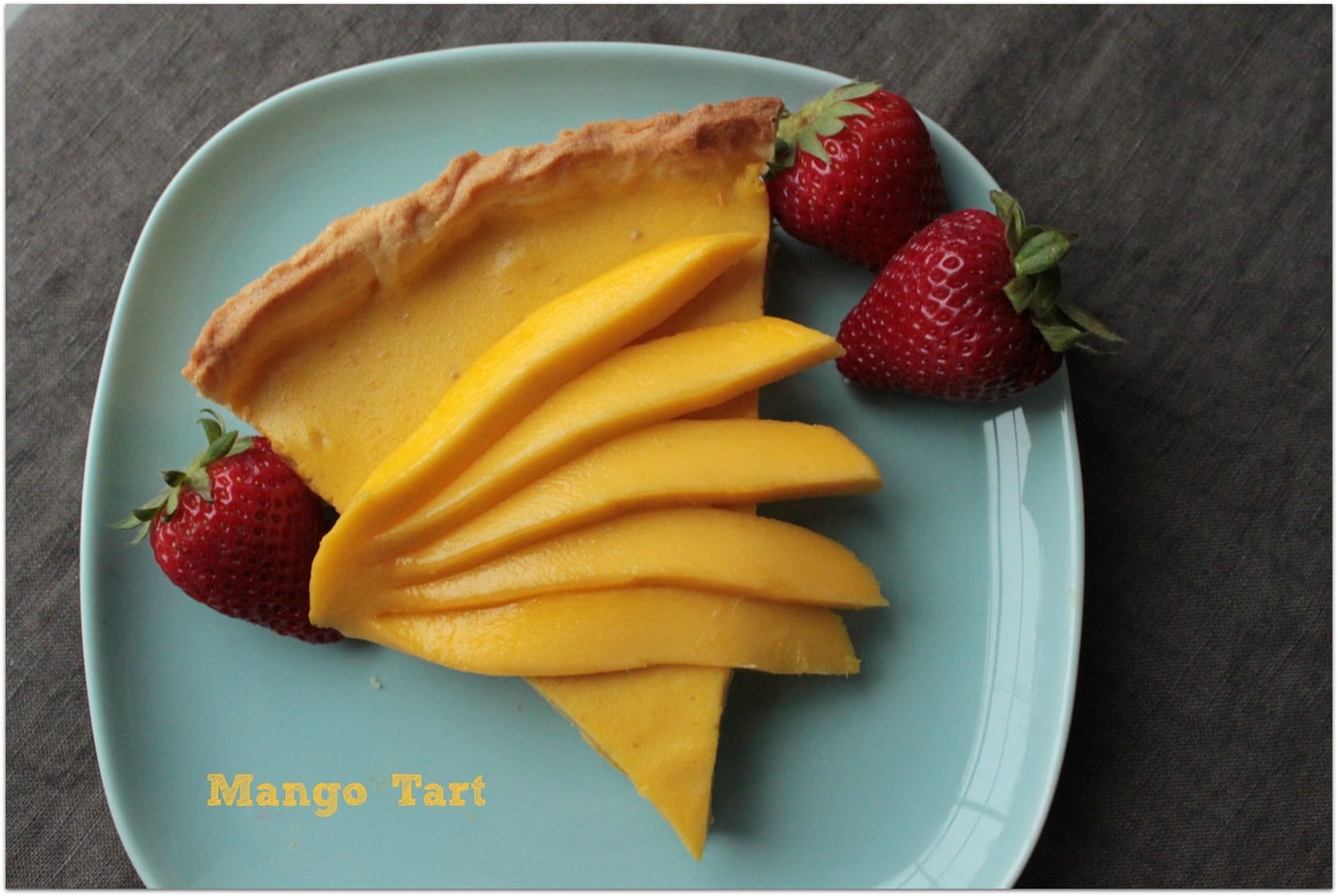