Cabbage is an Underrated Vegetable

It’s true. Cabbage is often the butt of jokes (see what I did there?) Poor old cabbage. I firmly believe that a spotlight really needs to be shone on this cruciferous vegetable. In fact, cruciferous vegetables are a whole category of vegetables that don’t get a lot of love, especially in this house. I’ve been a broccoli hater for years but it wasn’t always so…and I blame my mother. I know she tried her best and she had plenty of other things to do than tend to that boiling pot of broccoli on the stove but I truly believe my hatred of those little green trees began in my childhood.

Many people make the same mistake with cruciferous vegetables; over boiling them until they are tasteless mush. I’ve made a point of always paying close attention to cooking them so I didn’t scar my own children on the rare times that I’ve made them for dinner. With the exception of cabbage which is great for cabbage rolls (lazy and rolled) and sauerkraut, it also happens to be one cruciferous vegetable that is great over boiled with a plain smattering of vinegar, salt, and pepper.

Over the last two winters I’ve taken to experimenting with cabbage a bit more. After making sauerkraut, I’ll roast the leftover cabbage in the oven until it’s dark and crispy. There are no words to describe this caramelized transformation. If you have never roasted cabbage, I highly recommend that you do. Use a dark roasting pan, some oil and crank it up to 400 F. It’s great roasted with fennel and also delicious with roasted grapes.

So What exactly is a Rutabaga?

Rutabaga. Just what exactly is a rutabaga? I can safely tell you that this is the FIRST rutabaga I’ve ever cooked and I STILL blame my mother because I had it in my head that rutabagas are just turnips.  I remember her mashing pots and pots of boiled bitter turnips. They were the only vegetable that ever made me gag.

Rutabagas are not turnips, they are actually a cross between cabbage and turnips that originated in Sweden (you may also know them as Swedes). You can eat the both the tops and the roots, which makes it a root vegetable even though it’s part cruciferous. Throughout Europe they are prepared in several ways; roasted, baked, as a flavor enhancer in soups, uncooked and thinly julienned as a side dish or in a salad but the most common way to cook them is to boil and mash them as I did for this recipe. Just like my mom did. 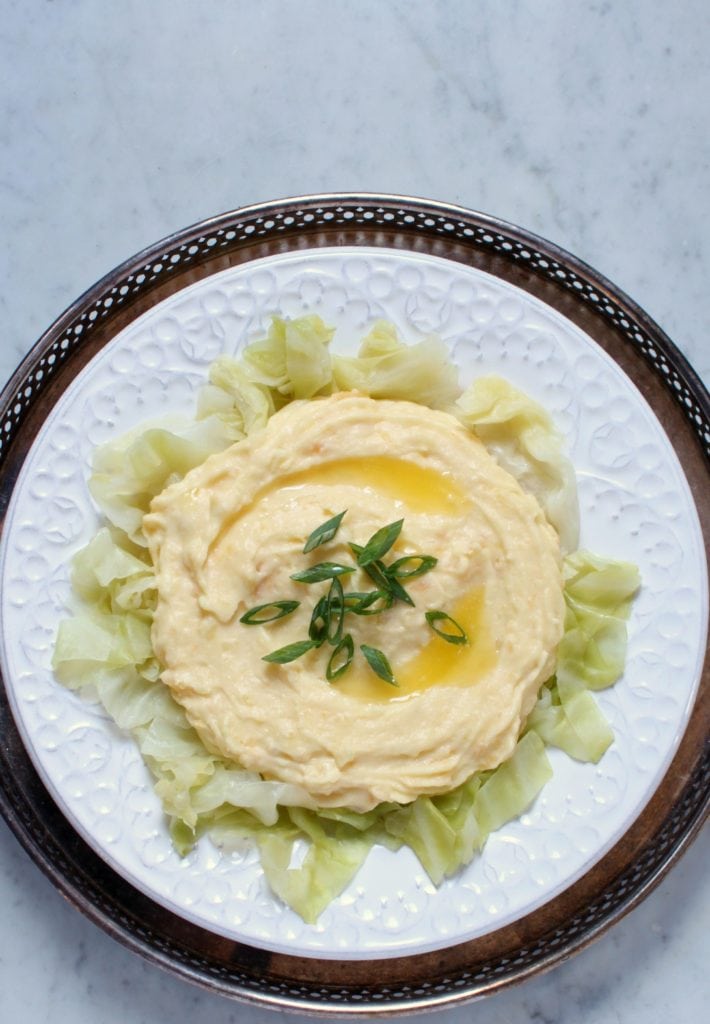 The Irish Love a Good Potato

Potatoes are a classic Irish ingredient, mainly for historical reasons. While making this dish I tried to think about the reasons why this dish was so important in the culinary history of Ireland. It’s most definitely not an elevated dish, no matter how you serve it. It was meant to be cheap and sustaining. I highly doubt it was ever made with copious amounts of butter and cream like modern day versions are. Personally, I love it as a side dish and I think it’s delicious but if it was the only thing I had to eat for years, it would lose it’s charm.

There are many versions of Colcannon on the internet. While making my version I decided to ignore them so that I could create my own. The rutabaga and potato mash is something that I thought would add a unique spin to the dish, as well as the addition of ghee, or clarified butter. It was both delicious and sustaining. 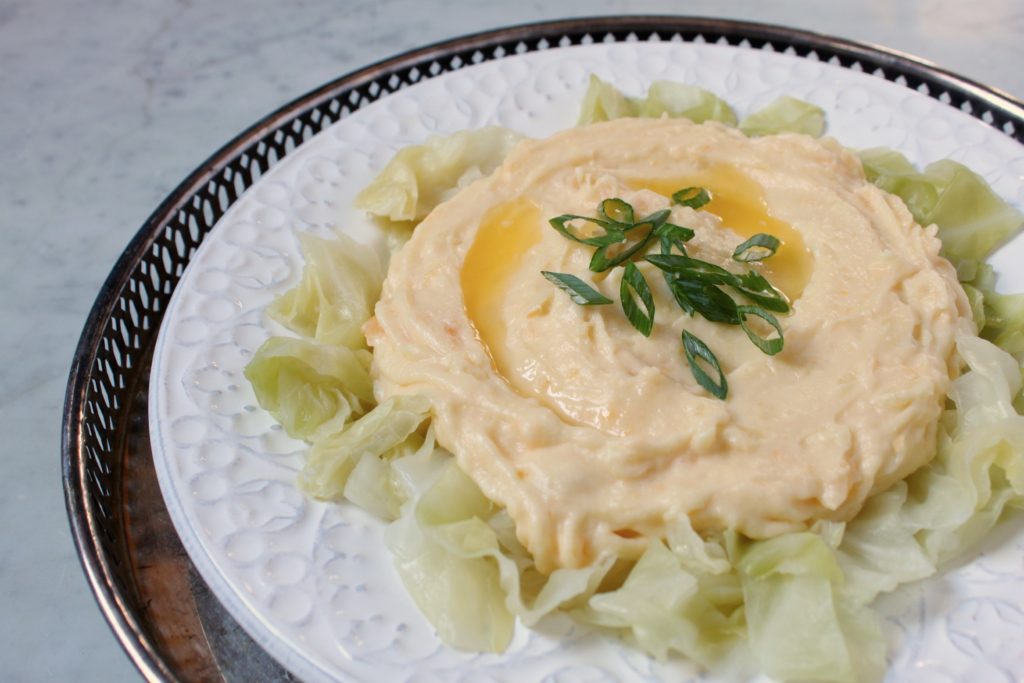 I hope you enjoyed this little snippet of traditional Irish cuisine. Potato, Cabbage, and Rutabaga Colcannon is a great little side dish to make in the dead of winter, especially when you’re watching your spending after Christmas and all those crazy heating bills. I’m excited to see what the other bloggers in the Eat the World Challenge have come up with for this month! Check them out here:

Tasty Side Pieces from Dish ‘n’ the Kitchen: 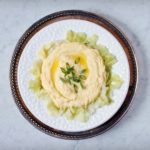 5.0 rating based on 2 ratings
A traditional Irish side dish with the addition of rutabaga.