The Ultimate in cheese dips, Pimento Cheese will melt your heart and leave you wanting more.

This post should come with a stern warning. If this is your first time encountering the wonder that is Pimento Cheese, there’s a 95% chance you will become obsessed. Also, you must be Canadian because from what I know, most Canadians are in the dark when it comes to this cheesy dip. For me, my obsession started a few years ago with a tweet from my friend Phil, the blogger behind Baconhound. 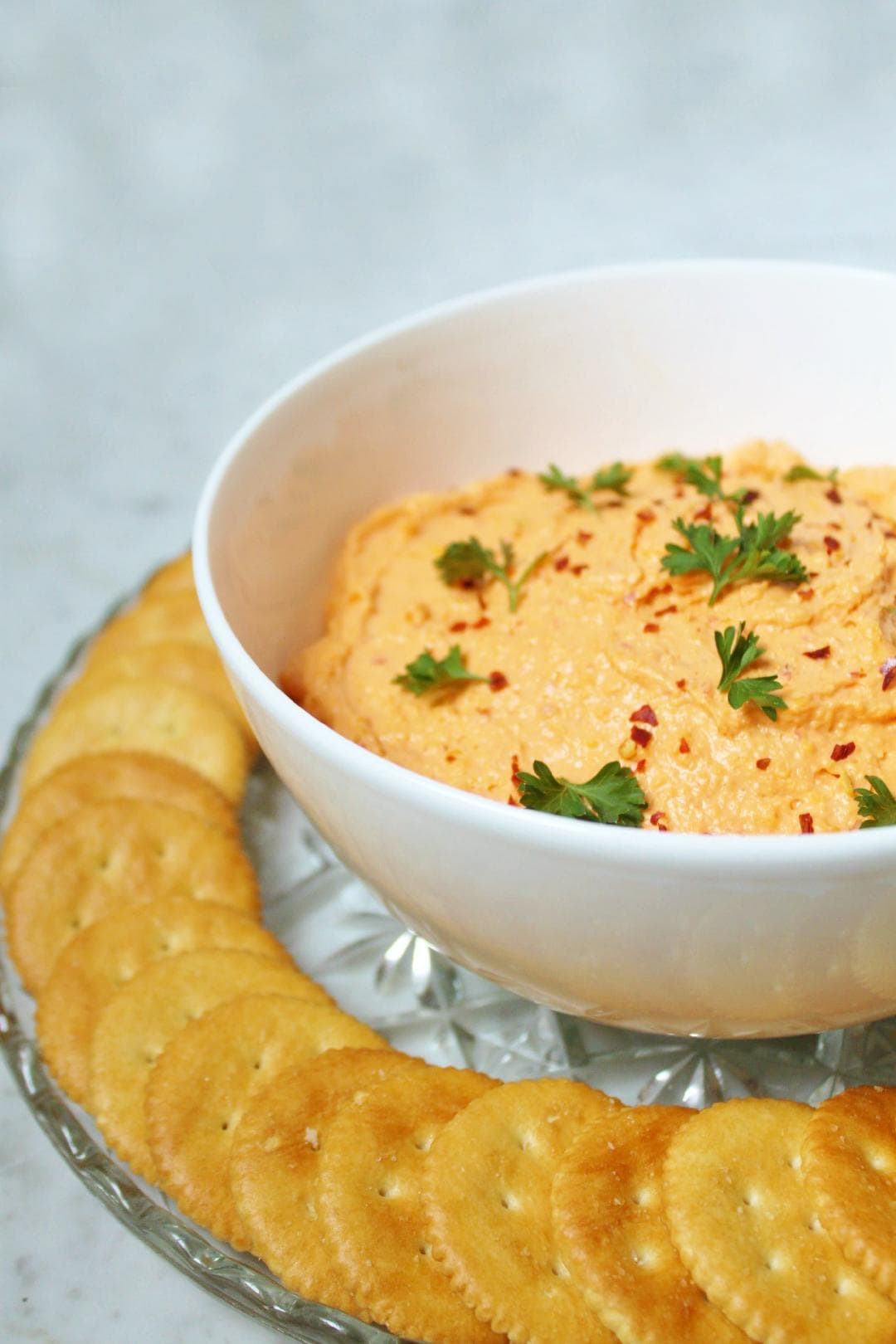 After that tweet, all bets were off. My husband and sons quickly became fans, then this summer I made it for the burger bar at my sister’s wedding. What can I say? It was the perfect opportunity to spread my cheesy infatuation to as many people as possible! 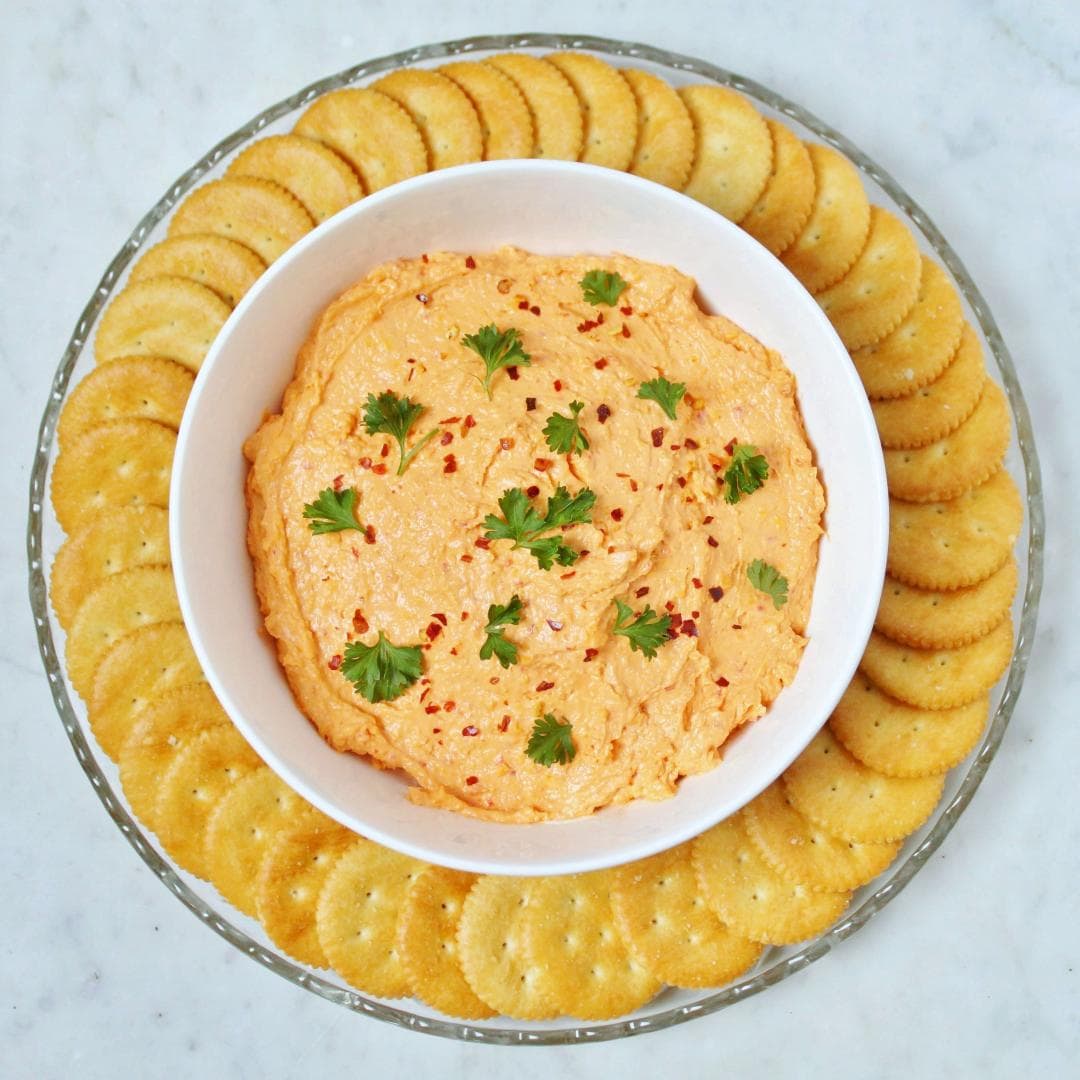 The Paté of the South

Our neighbours from the South have come up with some amazing culinary contributions. Solid Pimento Cheese was sold all over the US in the early 1900’s. It became associated with the Southern cuisine later on when recipes for a spreadable version became popular. These days it is often referred to as ‘The Paté of the South’ and is a glorious combination of Creole, Spanish, and Tex-Mex flavours. 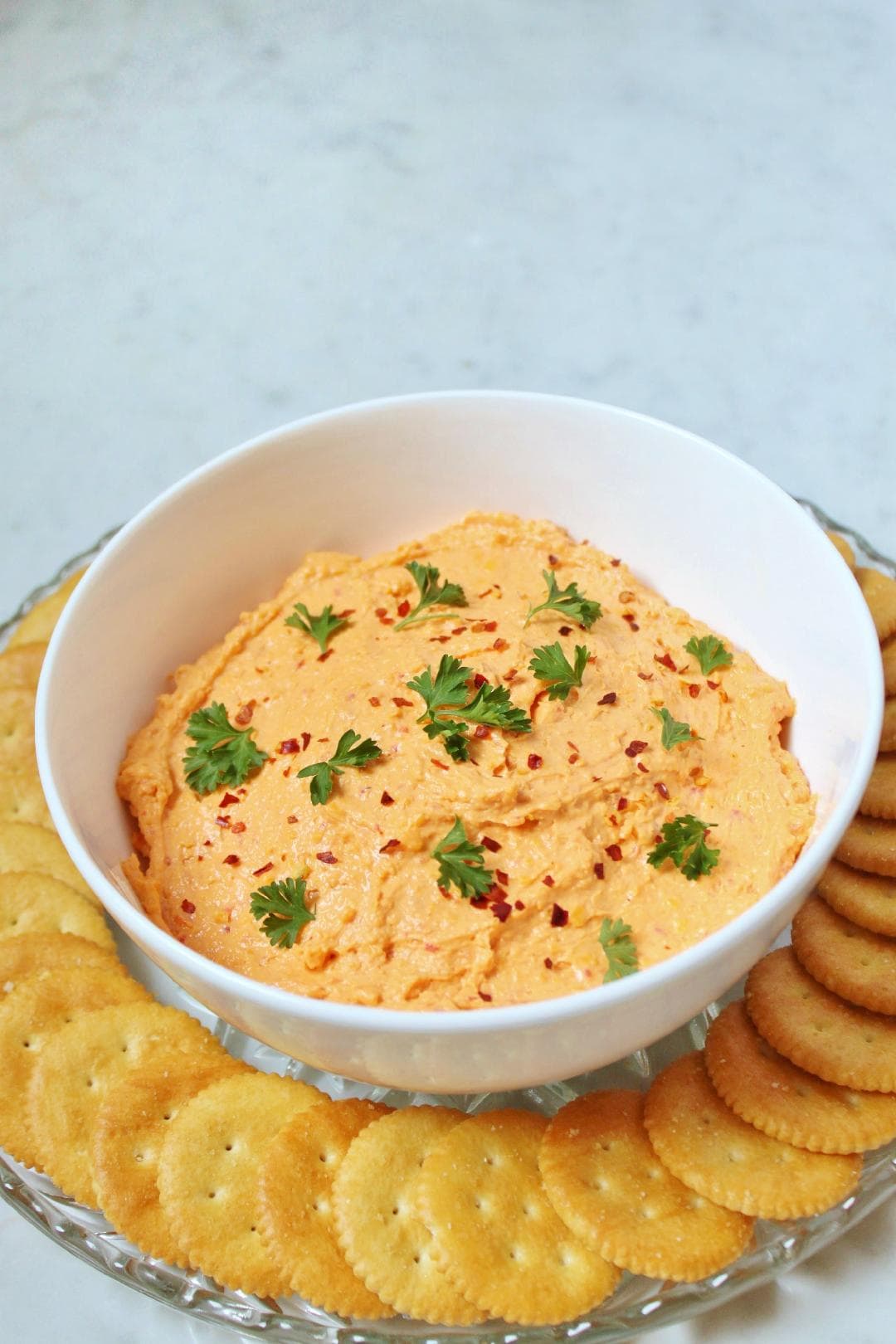 What is Pimento Cheese Made Of?

According to Anne Byrn, a New York Times bestselling cookbook author and writer, it’s made of ‘Cheese, Pepper, and Possibilities’. Most versions contain some kind of combination of sharp cheddar, mayonnaise and red pimento peppers. Sometimes the pimentos are replaced with roasted red peppers, sometimes there’s cream cheese but the greatest variety is in the seasoning. Regional varieties may contain worcestershire, hot sauce, cayenne pepper, jalapeños, onions, garlic, and dill pickles. 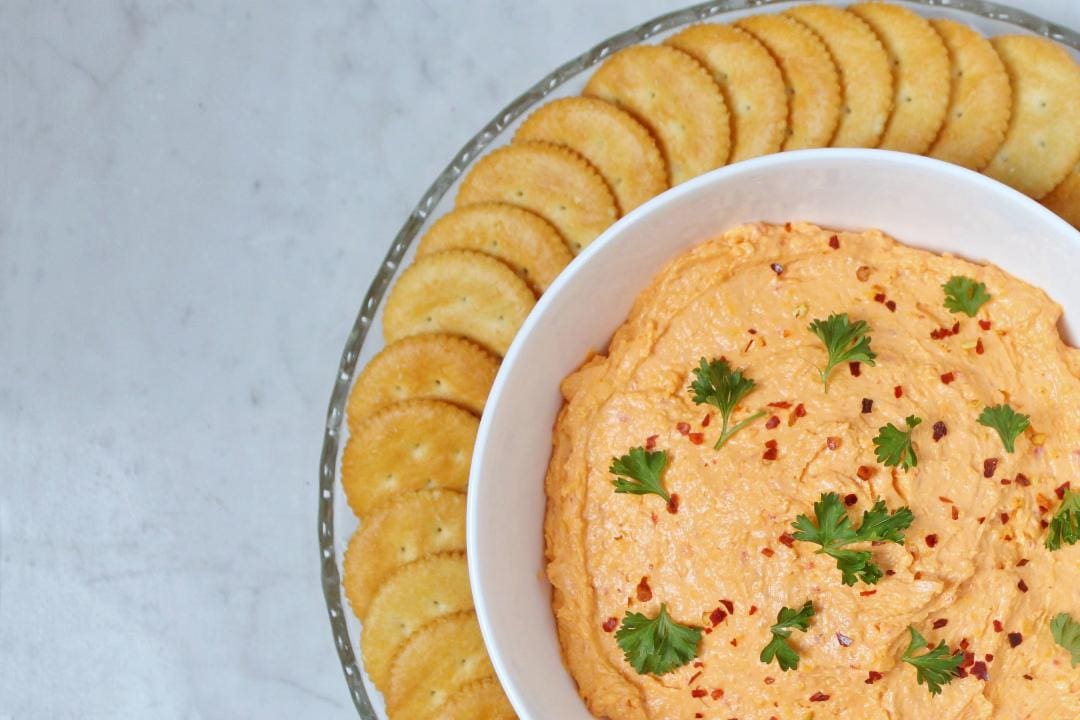 How Do You Eat Pimento Cheese?

Dearest readers, you can put this shit on everything and I suggest that you do. Simply enjoy this Caviar of the South on Ritz crackers or celery if you’re so inclined. Use it as a sandwich spread (as originally intended) but go a step further and grill it. Use it as a cheese base for your next mac ‘n’ cheese or add it to grits (or mashed potatoes!), the other caviar of the south. As I mentioned before, it’s also amazing on burgers and by association, hotdogs. 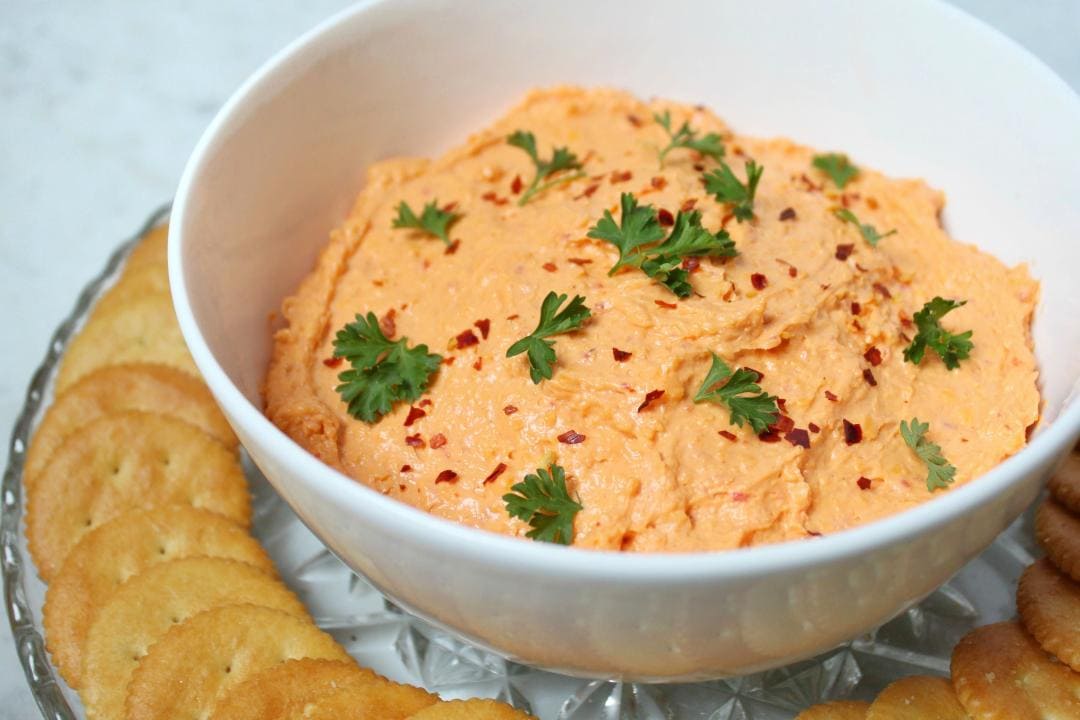 Pimento Cheese comes in a variety of textures ranging from a chunky to smooth. I like mine to be smooth and creamy so I start with a fair amount of warmed cream cheese and use a food processor. There’s no right or wrong way to make Pimento Cheese, don’t be afraid to experiment and come up with your own version! 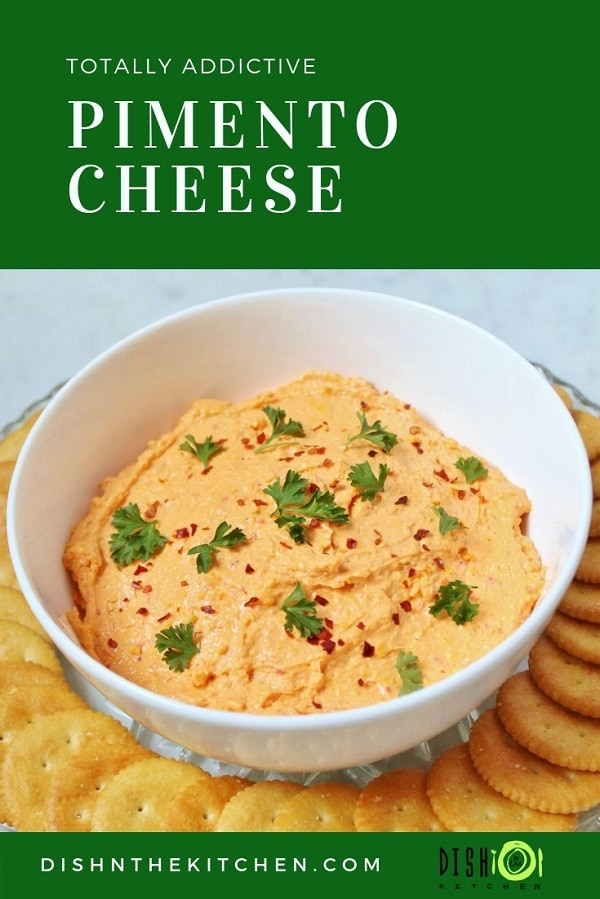 Get Dipping with Dish ‘n’ the Kitchen

The longer you can leave the dip to sit in the fridge, the better the flavours will mingle.