About a month ago I started seeing friends post pictures of David Lebovitz‘s new book ‘My Paris Kitchen’ on various social media. I was extremely jealous because even though I’m a big fan of Mr. Lebovitz, I’ve only used recipes available on his blog and I didn’t own a copy of any of his books at all. I decided to break down and create an Amazon account just so I could order one (or two). I ended up ordering My Paris Kitchen and The Sweet Life in Paris as well as Salted (by Mark Bitterman) which is an interesting book on the history and procurement of salt. It may sound a bit dry…but it also has recipes and is actually a really great read. I previewed it from my library a while ago and decided I would eventually order a copy for myself.

My Paris Kitchen didn’t take long to arrive in my mailbox. Believe it or not I still haven’t found the time to sit down and go through the whole book yet but on Saturday while I watched another six inches of snow cover my almost green grass I decided to distract myself by making a pie. Baking is the only defence I have against sinking into depression and it helps me to keep hope up that spring will make an appearance this year. Luckily, somewhere it IS spring and rhubarb is already available at the farmer’s market. I could have made a regular fruit crisp and it would have been a lot easier but I wanted something a little more challenging so I started by flipping back the MPK table of contents. I may be a little OCD because there is a certain rule I follow when it comes to a new cookbook in my possession: If I can’t sit down and read entire the book it sits on the counter unopened until I have time to read all of it. Apparently reading the table of contents is not included in this ‘rule’. I wanted to see if Mr. Lebovitz had included any recipes including Strawberries and Rhubarb and finding none, I went with an easily adaptable Apricot Crumble Tart recipe. It is essentially a crisp held within a tart shell. I flipped carefully to the recipe on page 309 and it looked stunning! I had definitely found my project for the day. 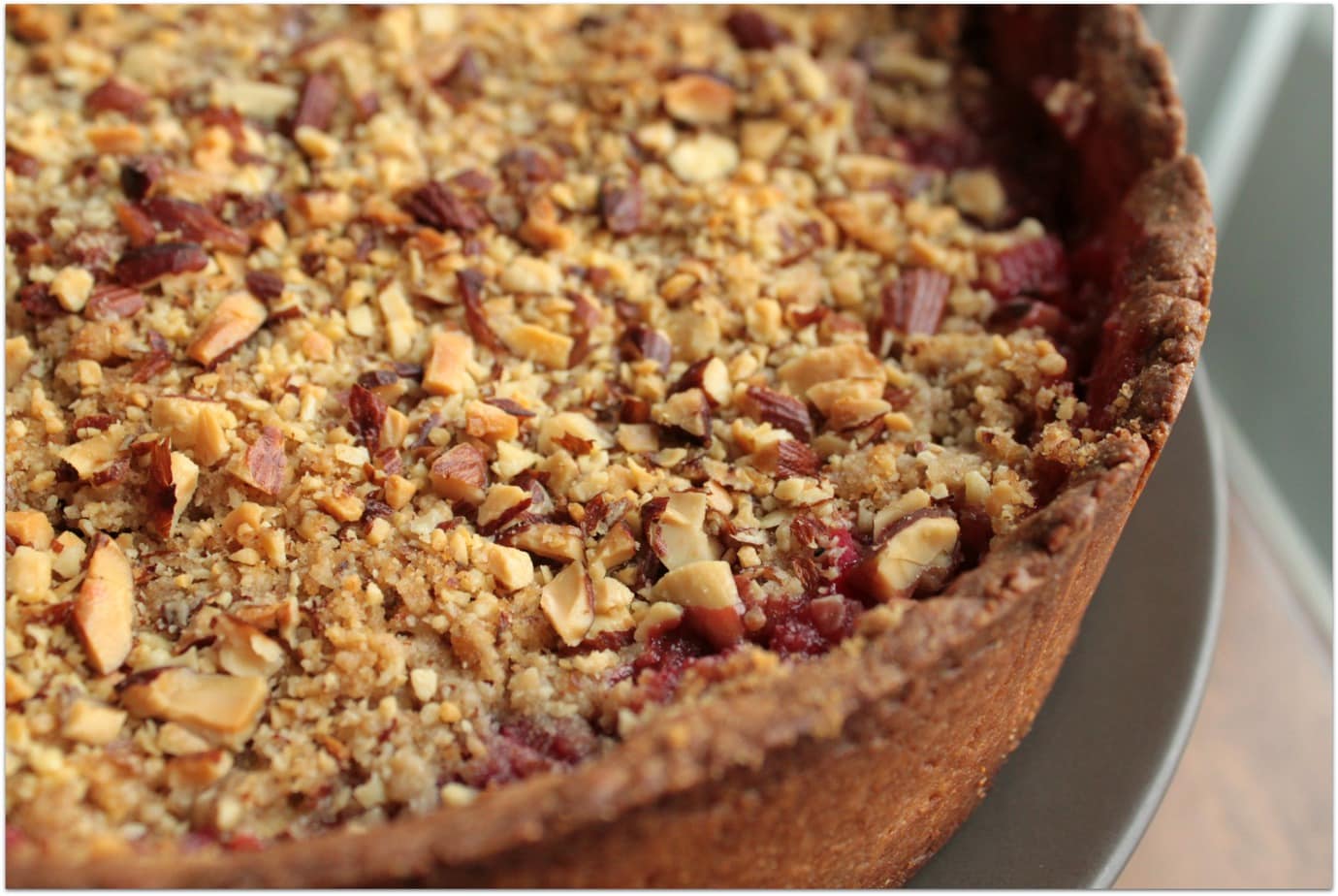 I followed the recipe for the tart pastry but found that it didn’t seem to come together very well in the kitchenaid. I ended up adding only a couple of drops of water until it looked like it was going to hold together. While the end result was tasty I don’t really know if this fiddly pastry was worth the extra work. It didn’t roll very nicely at all and I had a difficult time getting it into the spring form pan. The original recipe says to push it all in place with your fingers and that really isn’t my style. Isn’t it better to touch the pastry as little as possible? I managed to get the bottom nice and thin with the rolled dough but ended up pressing the sides in place in clumps. This took a long time to do and I was happy to chuck it in the freezer after all that effort.

Originally I had quite a bunch of rhubarb so I made grand plans to make some rhubarb syrup and shrub for cocktails. These plans were thrown out the window when I left the rhubarb roasting in the oven for about 20 minutes and it was overcooked. It was still edible and the syrup was really tasty. We ended up having it on waffles for Sunday breakfast. I had to do another batch with the rest of the rhubarb so I ended up not making any syrup or shrub at all. Not to worry though, someday my rhubarb will start growing in the backyard and I will have so much that I won’t know what to do. The second batch of roasted rhubarb was perfect at only ten minutes.

To the rhubarb I added about 2 1/2 cups of chopped strawberries, about 3 tablespoons sugar, 1 1/2 tablespoons cornstarch, 1 teaspoon vanilla extract and 1/4 teaspoon of almond extract. When I poured the mixture into the pre baked shell it was just full. Since the fruit does shrink during cooking I think next time I will add more fruit and heap it a bit so the finished product looks fuller.

The crumble topping for the tart was really easy to make. I found that the recipe blitzed the whole almonds a bit too long so they were too fine. I ended up adding a couple of roughly chopped almonds to add a bit more visual interest. I think including the nuts in the crumble is essential. They added a nice crunch and finishing flavour to the tart.

To make the dough, remove the butter from the fridge and let soften for ten minutes in your mixer. Using the paddle attachment add sugar and beat until no visible lumps of butter remain. Add the egg yolks, then the flour and salt. Mix until the dough in comes together (I ended up adding a couple of drops of water but you may not need to).

*note: I just realized I let the dough rest in the fridge at this point and didn’t need to. Maybe that’s why it was so hard to roll out!

Trace a parchment paper circle to line the bottom of your pan and grease the sides. Press the dough into the pan bottom first then go halfway up the sides trying to get it as even as possible. Place crust in freezer for 30 minutes.

Make the crumble by pulsing all the ingredients (except butter) in a food processor until they are fine. Add the butter and pulse until the crumble comes together in chunks. I added larger pieces of almonds for a little bit of visual fun.

Line the tart shell with aluminum foil and fill with whatever you use for weights (I use garbanzo beans). Bake for 20 minutes at 375 F then remove the foil and weights and bake for another 5-10 minutes more until golden.

Make the filling and transfer it to the tart shell. Top with the crumble and bake for 50 minutes until the filling is bubbling and the crumble is golden. Let it rest for about 30 minutes then remove the sides of the spring form pan and let cool further…though you could probably eat it at this point and we did! We ended up having this warm tart with vanilla ice cream before we ate dinner and no one complained.