Last weekend, after all the graduation festivities were over, we had a little ‘pre-Father’s Day’ celebration for my dad. He was tickled pink to get his prezzies a week early-or to have any at all for that matter. We all live far away (except for my little sister who stayed close to home) and he usually just gets a phone call.  My father in law’s birthday is just before Father’s Day so he usually just gets a card or phone call that mark both occasions at once.

Since our kids are getting older, they don’t bring home gold painted macaroni sculptures or clay pencil holders or even cards from school anymore. In fact, they’ve kind of dropped the ball in recent years. So, I take on a great amount of the Father’s Day preparation in my house and I don’t mind. He’s not my father but he is the father of my children and he deserves to be honoured at least once a year. I promised that this year, he would be well fed and I think he would agree that I kept my promise.

We started out Father’s Day with Belgian Waffles for breakfast. I was successful at  getting kid number two out of bed and her main task was to make the waffle batter. I’m pleased to say she did really well and now that I know she can make darn great waffles, they will be her job forevermore. While she was making the batter, I fried some bacon, macerated the strawberries, made orange juice, cappuccinos and french press coffee. I showed her how to make whipped cream and breakfast was ready. I made sure to fry some extra bacon so we could have BLT’s for lunch along with more of those great tomatoes from the previous post of Summer Weekend Freshness.

First and foremost the day was a day about honouring dads. For dinner, I really wanted to invite some friends of ours who have had a difficult couple of years following the passing of their daughter. I understood that coping with such a loss is extremely difficult but even more so on holidays. Though she’s no longer of this earth she is definitely still a part of her father’s heart and once he become a dad, his life has changed forever. I’m very pleased that they accepted the invitation as I thoroughly enjoyed sharing our meal with them.

Fresh produce from the Farmer’s Market included cipollini onions which I roasted whole in the oven. We also had a ‘dirty’ potato sour cream salad. I had no idea what our friend was talking about when he used that term to describe the salad, then he explained it was because I had left the skins on the tiny potatoes. I could never imagine peeling such tiny potatoes, it would take forever plus I really like them left on.  For the salad I boiled the tiny potatoes for about 10 minutes and let them cool. I diced some bacon and garlic and fried them up. The I added some green onions and sliced snap peas to the bowl. I seasoned the salad with salt and pepper and added a couple of generous rounds of lemon juice. Just before serving I added about 3/4 cup of Greek sour cream and stirred it all together.

And finally, we made up some whiskey burgers. I’ve been keen to try this ‘recipe’ ever since I saw it on Pass the Sushi‘s Father’s Day recipe round up. When I say ‘recipe’ I mean idea because I had a quick glance over the ingredients but didn’t read the directions part. If I had, we would have had lovely stuffed burgers. I ended up just throwing all of the ingredients into the mince and just making burgers the way I usually do. They actually turned out quite well. Our adult kid handled the barbecuing part so dad didn’t have to lift a finger. I bought some whiskey flavoured cheddar to top those burgers off with. It was delicious! 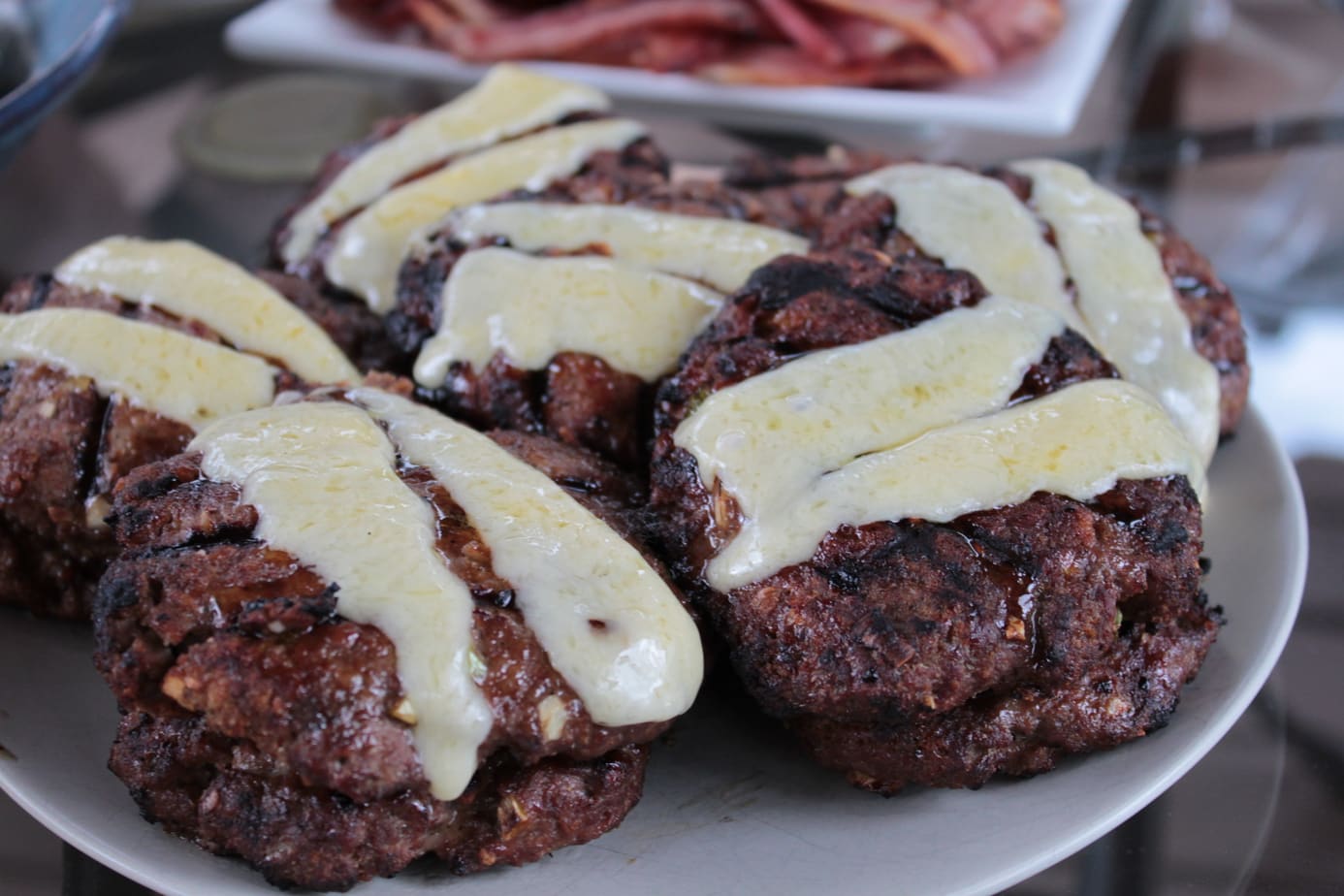 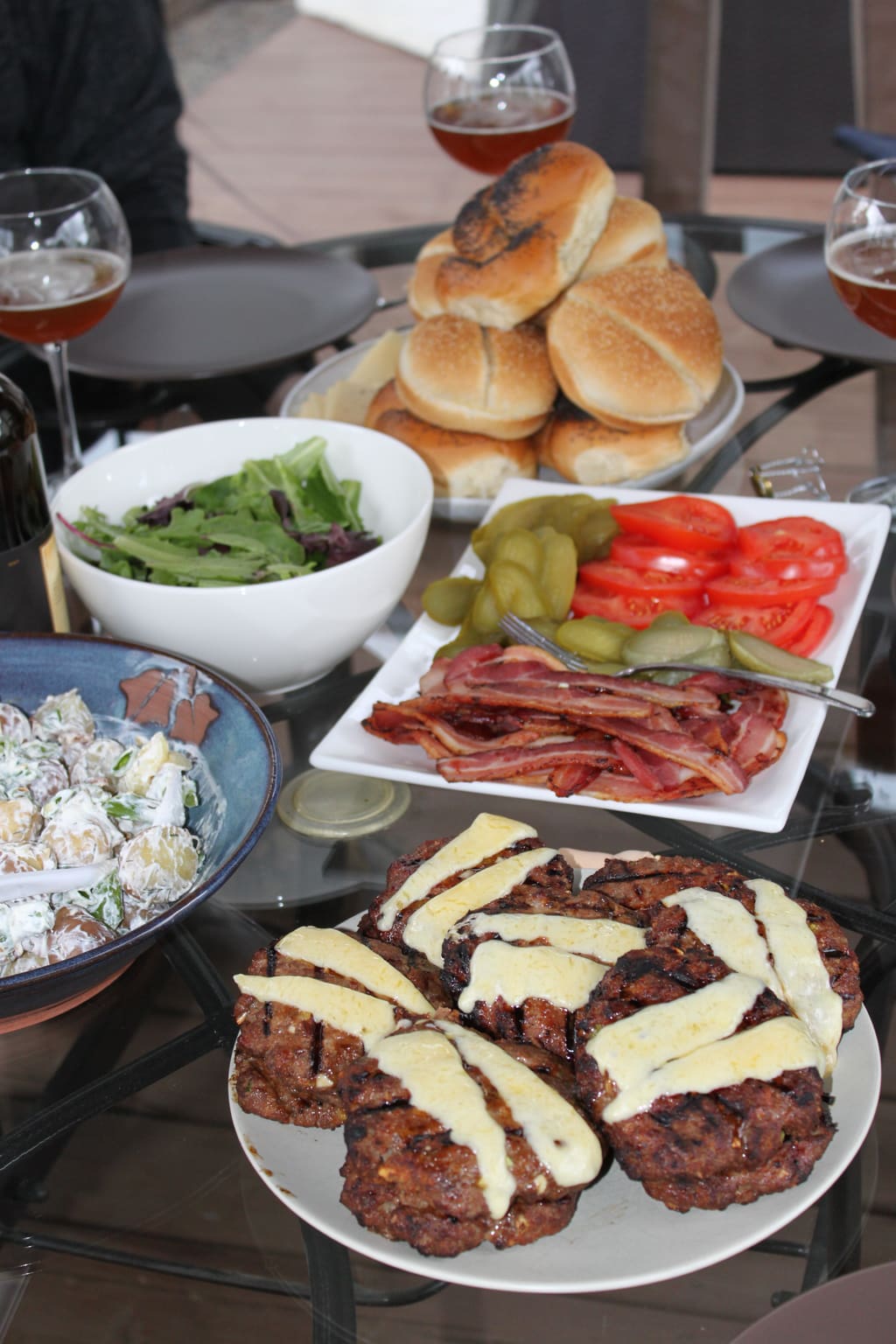 Burger toppings also included sauteed mushrooms with Worcestershire sauce, mixed lettuce, more of those great tomatoes, my mom’s homemade dill pickles, various condiments and BACON! I don’t know if you noticed but we had bacon at every meal today. Today was truly a feast day for a king. 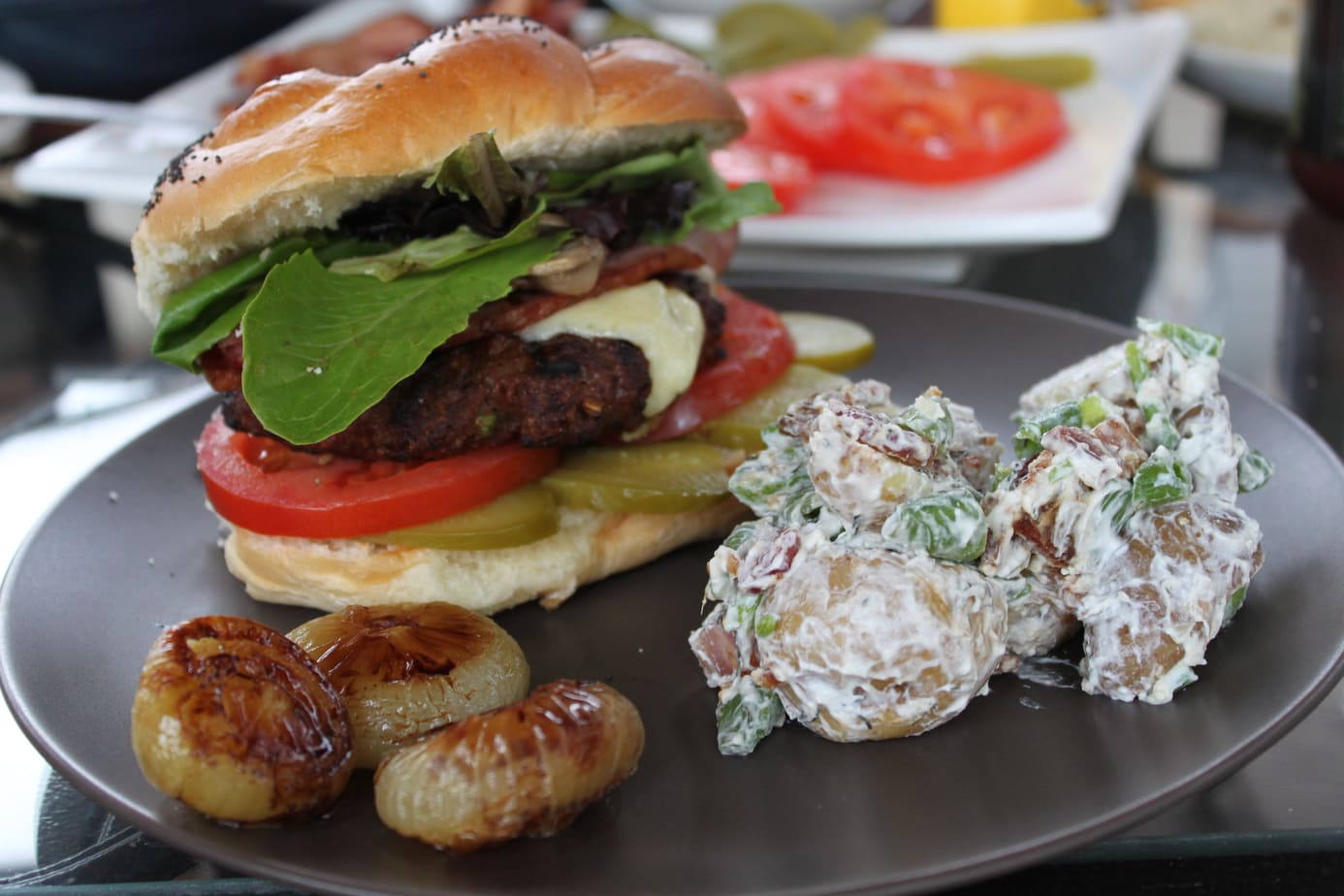 No Father’s Day is complete without the finale…DESSERT!! In this case I chose an old family favourite. One that my husband’s grandmother made for him as he was growing up and one that I make for my kids at least once during the summer. It’s Grandma Kyle’s Peanut Butter Ice Cream Cake. I’ve made it several ways, adjusting the recipe according to what is in my pantry and to taste. I almost always make it with oreo crumbs though the original recipe calls for graham crumbs. Today, I was crossing my fingers that the cake was frozen enough to serve by the end of dinner. I ended up having to shell peanuts to put in with the oreo crumbs and also realizing that I had no cream cheese. I sent the boys to the store while I got to work on the crust portion. By the time I had the entire cake constructed it was 2pm. Our freezer is very efficient and so the cake was nice and firm by 8pm. Yay! 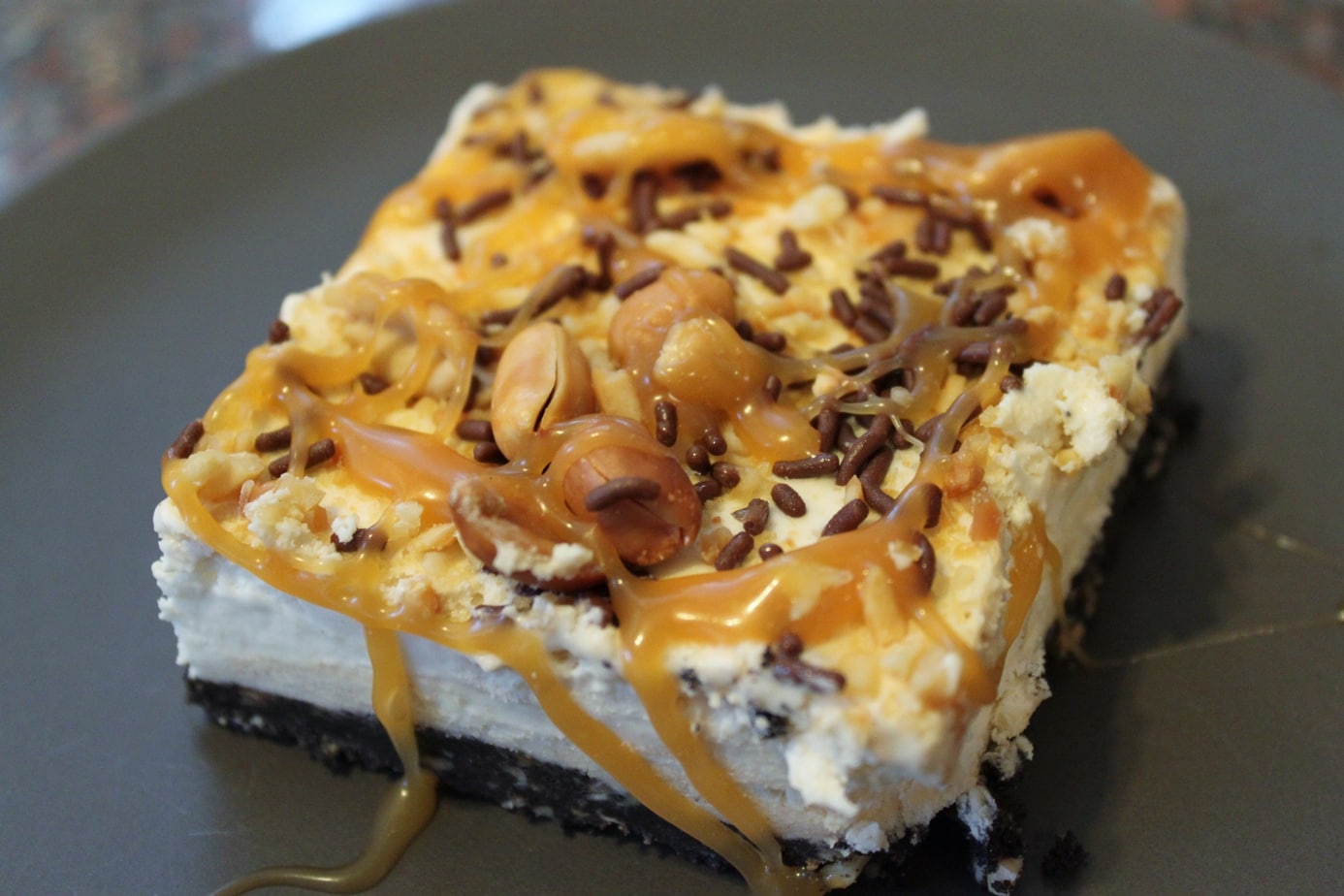 It was the perfect ending to a great Father’s Day even if it didn’t contain any bacon. Maybe next time?