Pickled Eggs are a long standing family tradition. They are simple to make and are an easy snack during card games and games nights. No canning required!

How is it that so many memories come back to our minds when we smell, taste, or create traditional foods? The foods that I grew up with weren’t haute cuisine by any stretch of the imagination but they were wholesome and honest. They carried their particular flavours (and sometimes textures) with gusto, unabashedly, and without apology. Eat me…and that is all.

The branches of my family are Western European and Canadian, but we call ourselves Canadian now. Once in a while the Hungarian and German roots make an appearance in our food, creating some of the more startling flavours to the pioneer-driven cuisine. Pioneer driven cuisine. I just had to pause and let that phrase sink in for a bit. I once was a little girl on the prairie but at the time I grew up, the true pioneer spirit of my family had long since faded with the appearance of modern conveniences like electricity and refrigeration.

Food Preservation on the Prairies

The methods of food preserving changed dramatically when these were introduced. I can’t even imagine my great grandmother putting up preserves on a wood stove but she did. As did my grandma right up until 1956. One large canner of beans in quart jars would take 3 hours to preserve! I think today we definitely take processed and preserved foods for granted. Even though I make pickles, jams, jellies, and sauerkraut, the thought of making these on a wood stove just makes me feel…tired.

Many of the dishes my grandpa and dad (and including me later on) grew up with required long cooking times. They would sit simmering on the back of the stove while countless chores were taken care of. I suppose this was a form of ‘convenience’ food…ready in hours with minimal effort and delicious when paired with homemade bread and pickles; always pickles. Once the meal had been cleared away it was time for the evening’s entertainment…family style. The countless games of cards and musical jam sessions were really all there was to do. Eventually some snacks would be put out, particularly if there had been some drinks flowing. 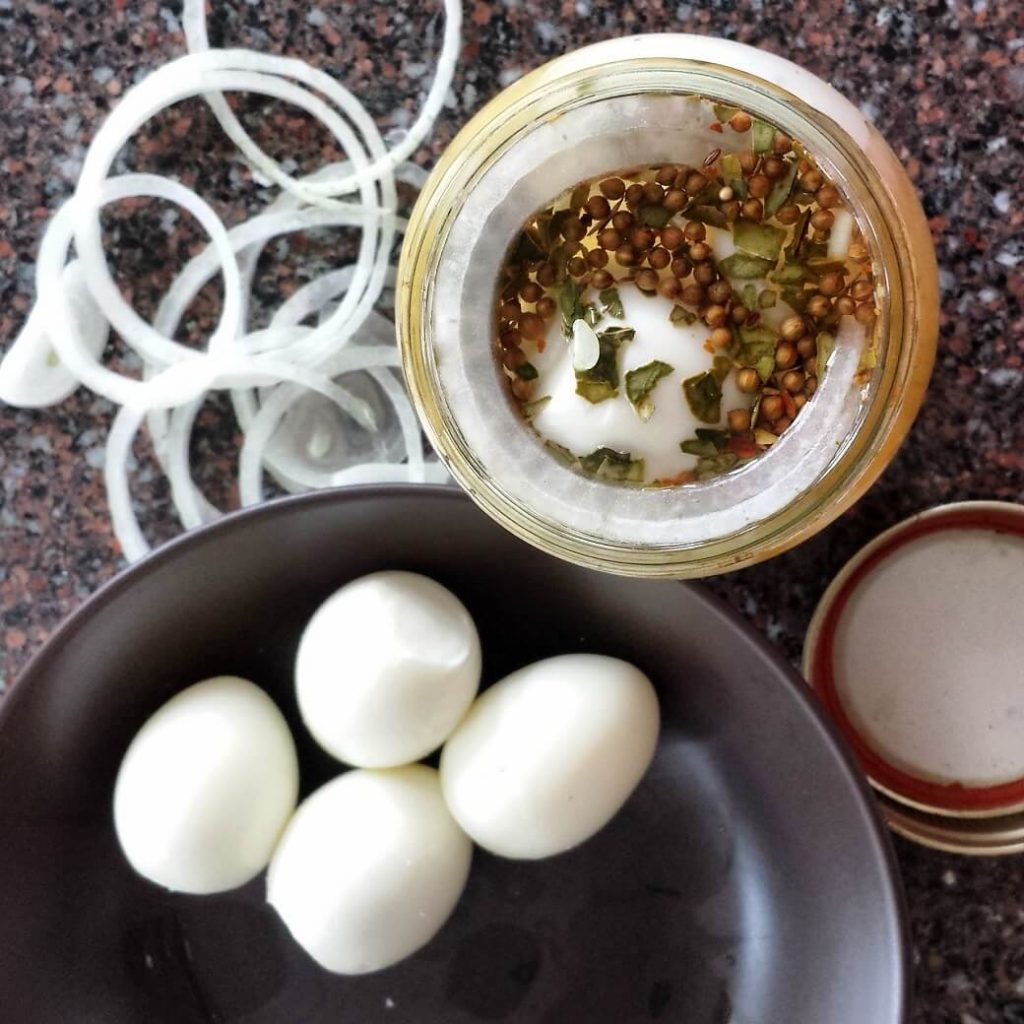 Our Family Pickles Almost Everything

My family never just puts out chips and dip. Nope. Back in the day and even now, all snacks were homemade and usually of the preserved kind usually pickled or smoked. Some of my earliest food memories were of my grandpa making his own sausage and smoking it in the old refrigerator in the back yard. Any fish that was caught usually met one of three fates; same day fish fry, smoked in the back yard (my favourite), or pickled with onions.

Including Fish and Headcheese

Yes, that’s right. Pickled fish. Believe me when I say this, it’s taken me a long time to appreciate sushi and ceviche because of my pickled fish past. While most of my family enjoys pickled fish, including my kids, I just can’t stand it. It has a particular texture that I just can’t ignore.  Pickled fish isn’t the end of our interesting snack food category either. Pickled meat, otherwise known as headcheese is also a thing in my family. It’s basically bits of offcuts which have been boiled down and gelatinized. This lovely dish is eaten with vinegar, salt and pepper. I’ll never forget the look on hubby’s face as he tried it for the first time when we were dating. He tried so hard to love it but I could see by the look on his face that he could barely control his gag reflexes enough to swallow it. 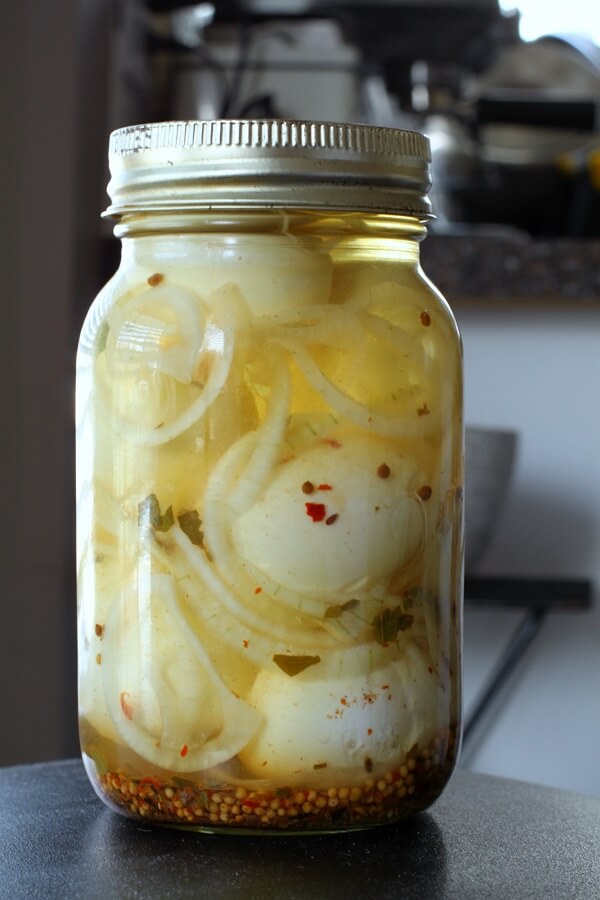 Pickled fish, ‘pickled’ meat, and pickled eggs. Pickled eggs are a little less startling to the outsider. Most people have heard of pickled eggs but have maybe never tried them at their local pub. Once in a while my kids beg me to make a jar, including as many raw onion rings as I can possibly cram into the jar because for some crazy reason they also love pickled onions. 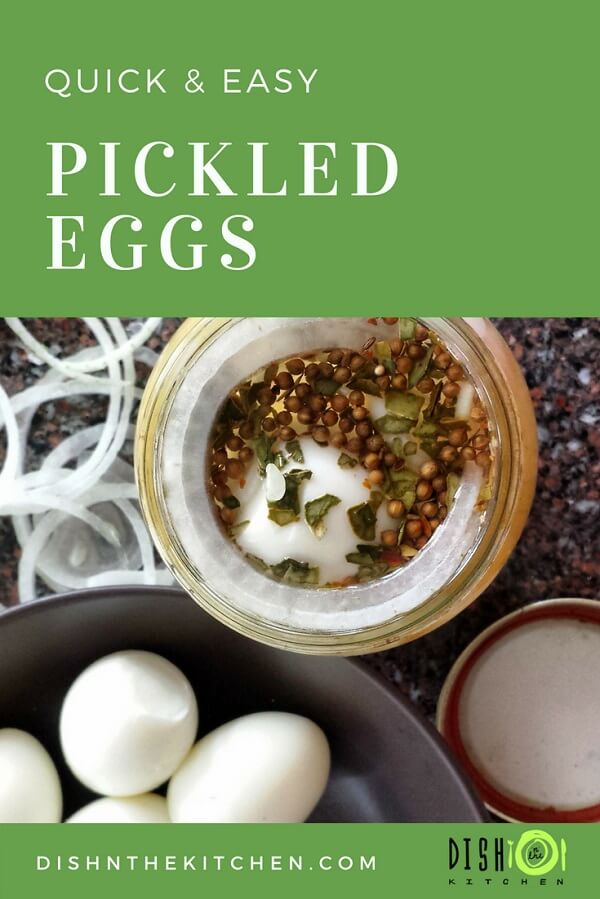 Pickled eggs are super easy to make, though they require about 4-5 days refrigerated sitting time. I try to hide them in the back of the fridge to avoid temptation but there is always that one kid that has to try one the day after to see if the eggs are ready yet. Once upon a time I was that impatient kid!  I generally don’t use a recipe but here is normally how I would do it.

*For best results, allow the eggs to sit in the brine for 4-5 days before eating.