The Mastical Maia – A Springtime cocktail that celebrates the rebirth of the land. This bright and herbal cocktail features Skinos Mastiha, a regional Greek spirit from the island of Chios.

A Welcome Spring and Rebirth

The month of March came in like a lion (both weather-wise and project-wise), trapping me in the house at times…but also allowing for blissful reprieves. Spring has sprung, or so they tell me, and the stark, cold barren winter is about to give way to greenery and birdsong. The thawing of earth brings about rebirth, a feeling of hope for renewal and growth.

One sunny afternoon, I attended several events around the city, including the “Rebirth of Greece” Exclusive Wine Tasting & Social at The Broken Plate. This family run Greek restaurant has been in our neighbourhood for 15 years. It began as a typical ‘Tavernetta Style’ Greek restaurant where you could actually lock arms and dance in a simplified Greek style, which culminated in Pentozali, or plate smashing. My mother loved it!

As the years went by, times and local attitudes changed and the owners also craved a change, a rebirth which reflected the changes of their homeland. They have breathed new life into their restaurant, while still preserving the warm culture and traditions of the Greek people. The owners of The Broken Plate may have renovated their space and altered the menu to reflect a more modern representation of the Greek culinary scene, but beneath the updates there still beats the passionate heart of traditional Greece.

Have you ever been fed by a Greek ‘Yaya’?

Have you ever been fed by a Greek ‘Yaya’? They will lovingly stuff you until you are cross-eyed and rolling out the door! After I sat down with my table mates (who were all serious wine examiners) I realized that I was the only one really there for the food. So I ate. So many plates were placed before me that I lost count. It’s a bit of a blur but my favourite dishes were the Grilled Octopus with Clams, Lentils, and White Wine Foam, the Red Beet Hummus platter, and the Rotisserie Chicken with Red Cabbage and Pickled Cranberry Slaw. There were seven other dishes, plus dessert and I would go back for every one of them (though not all at once!).

The wine tasting portion was low on my priorities since I had to drive to the city centre for another event but the wine examiners were in full force with their notebooks and spitting buckets. I don’t think I’ll ever turn into a professional wine person because I just can’t bring myself to spit it out!

Skinos Mastiha. It Was Love at First Sight!

As I sat there, listening closely and making notes of some of their favourites, my attention became locked on one lonely unique looking bottle at the end of the bar. I thought it might be a Greek gin but when I asked the server about it, she explained that it was Skinos Mastiha, a traditional Greek Spirit made from Mastic. 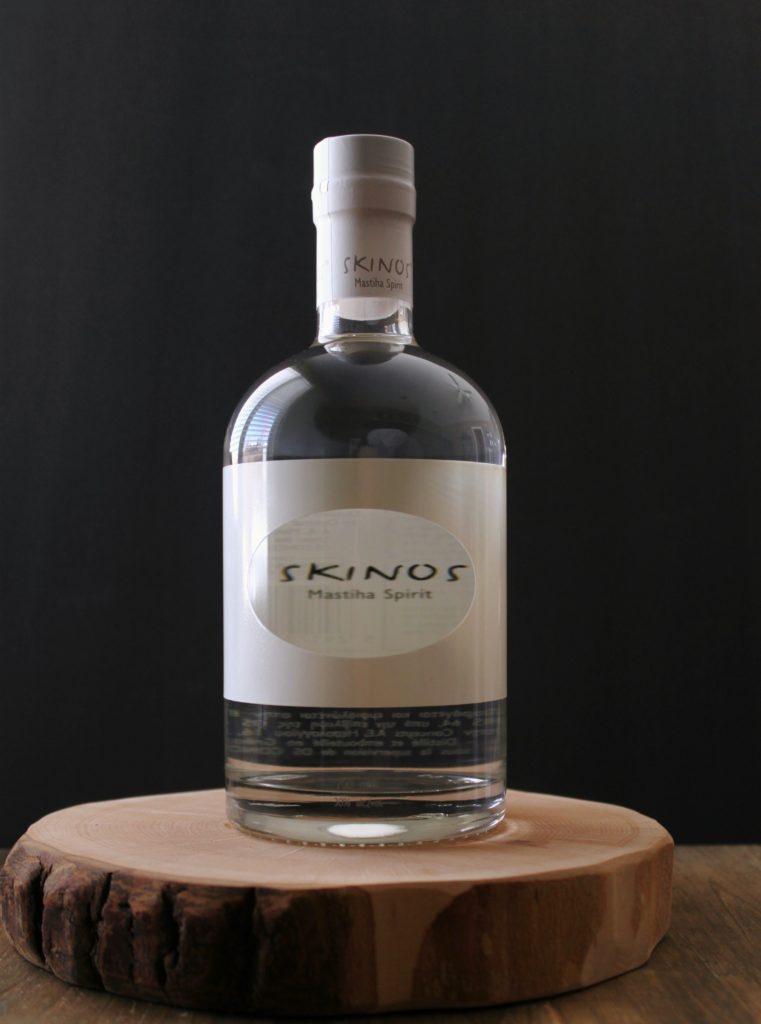 Mastic is the resin from the Mastiha pine tree that grows on the Greek island of Chios. The harvest is only slightly similar to maple harvest, as a cut is made through to the bark of the tree and the sap seeps out of it’s own volition. It is not ‘sugared off’ as is the process with maple sap, but allowed to dry in tiny tear-shaped drops. The drops are then distilled along with grain alcohol and then sugar is added to balance it out.

This traditional Greek liqueur, Skinos Mastiha, has a unique flavour profile, most similar to pine but also with a herbal freshness which my husband describes as mint. Finally, there’s a slight hint of earth for the finish. It’s entirely enjoyable on it’s own, but as this is a cocktail post, my job was to find flavour matches for this refreshing spirit. My aim was to highlight both the herbal and earthy nature of the liqueur with the addition of rosemary syrup and tone down the sweetness with some fresh citrus. The combination of rosemary and grapefruit made the latter an easy choice for citrus. 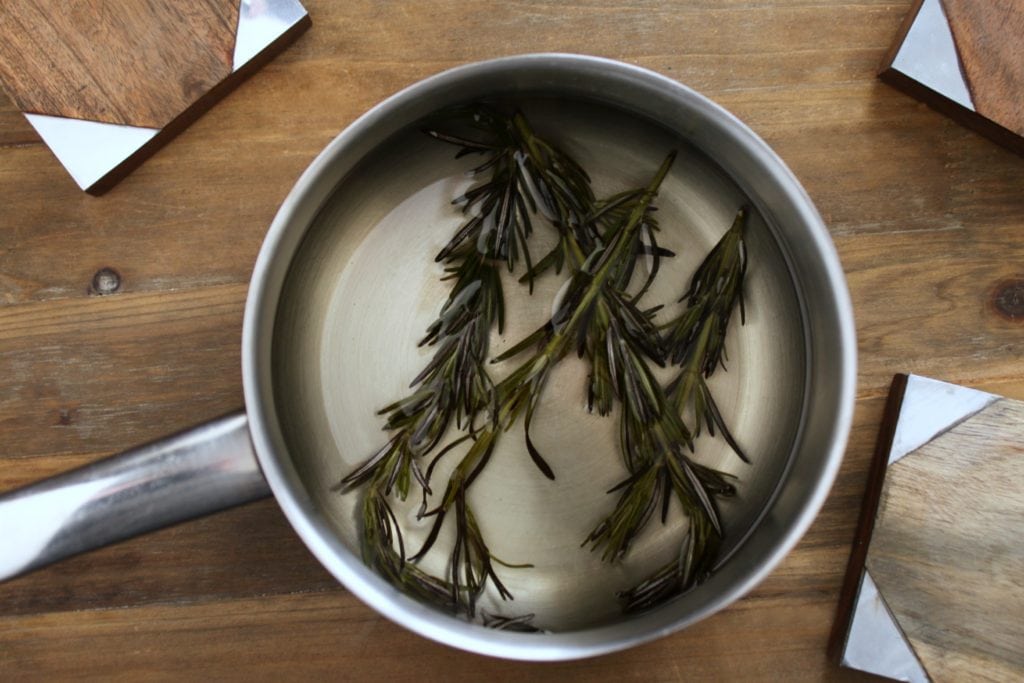 #FBCConnectingOverCocktails food bloggers all across Canada are welcoming Spring with refreshing herb based cocktails. Join them and raise a glass to seasonal rebirth! 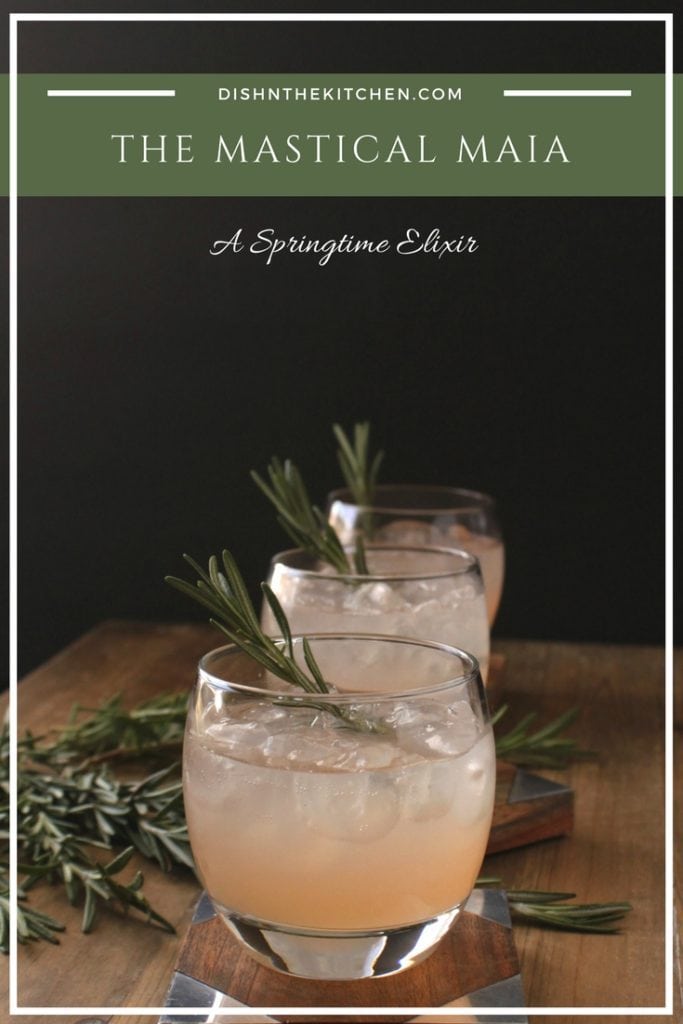 Raise a glass with Dish ‘n’ the Kitchen: 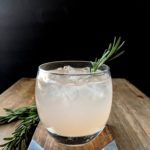 0.0 rating
A bright citrus cocktail with a woodsy attitude.

FOR THE ROSEMARY SIMPLE SYRUP FOR THE COCKTAIL

Around the World in Twelve Plates – Ethiopia