Even though we only live 3 hours away I couldn’t remember the last time we had visited our Province’s capital city as a family. I think it’s been at least 10 years since I’ve been to Edmonton and lately I’ve been reading that their culinary scene is starting to heat up. Literally. I’ve seen the drool worthy photos from friends visiting Edmonton’s city centre taqueria, Tres Carnales and I couldn’t wait for the day when I would finally try their authentic Mexican street food myself.

You may or may not know that I am a CFL football fan, in particular I am a Saskatchewan Roughriders fanatic (okay I’m a bit crazy when it comes to the Green and White!). When I saw that they would be playing in Edmonton against the Eskimos, I jumped at the chance to purchase tickets for hubby, myself, and kid number one. Kid number two wouldn’t be caught dead watching football but she came anyway because it just so happened that Edmonton Comic Expo was that same weekend. My original plan was to leave Calgary early enough so that we could have lunch at Tres Carnales and see her off at the train station.  I got a little (okay a lot!) irritated when hubby said he had to work ‘just a few more hours’ because even though it was Friday I had kept the kids home from school so we could leave early. When we left hours later I decided to keep with my original plan and it was hubby’s turn to get irritated when he found out he wasn’t getting lunch until we got to Edmonton. Luckily Tres Carnales was located about two blocks from our hotel and we were able to get our food and eat in under 40 minutes.

I hadn’t read any official reviews of Tres Carnales so I didn’t know what to expect. We arrived around 3:30 (by this time everyone was irritated) to find the place about half full. I had heard about how busy this place can get so maybe it was a good thing we were there mid afternoon. It didn’t take long to order and receive our food which was a good thing because that allowed us to get back to my ‘original plan’ in no time.

We couldn’t really pass up the opportunity to have guacamole. The chips were nice and freshly fried with just the right amount of salt and the guacamole was exactly how I make it at home.  It was almost gone when the server brought our tacos to the table. 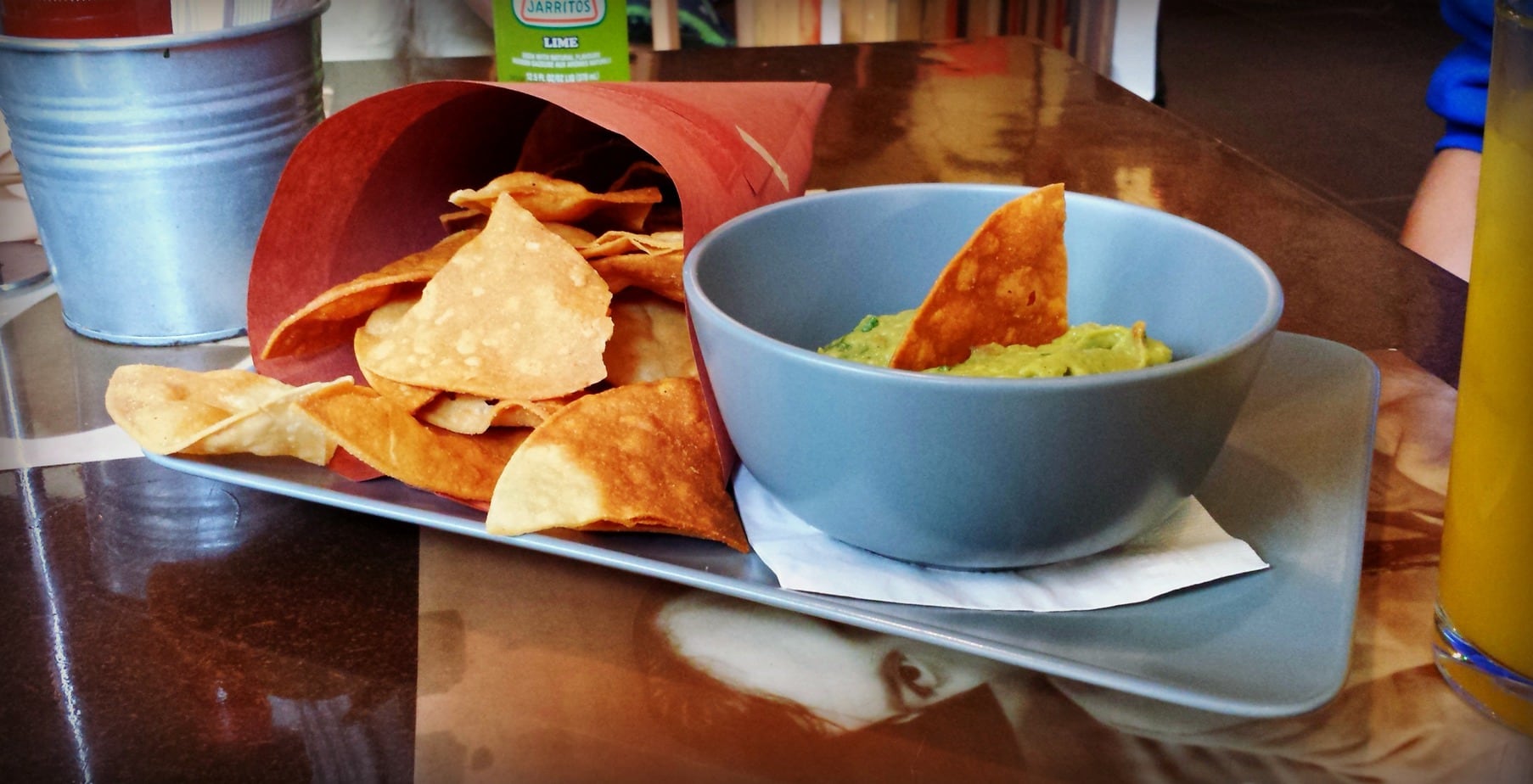 Kid number two was planning on having tacos from the a food truck at the Comic expo so she opted for a bowl of nice hot Pozole Rojo. The chicken/chili broth was a perfect match for the chilly weather outside. When I saw the cabbage in the broth I thought it looked like a spicy Mexican version of borscht. 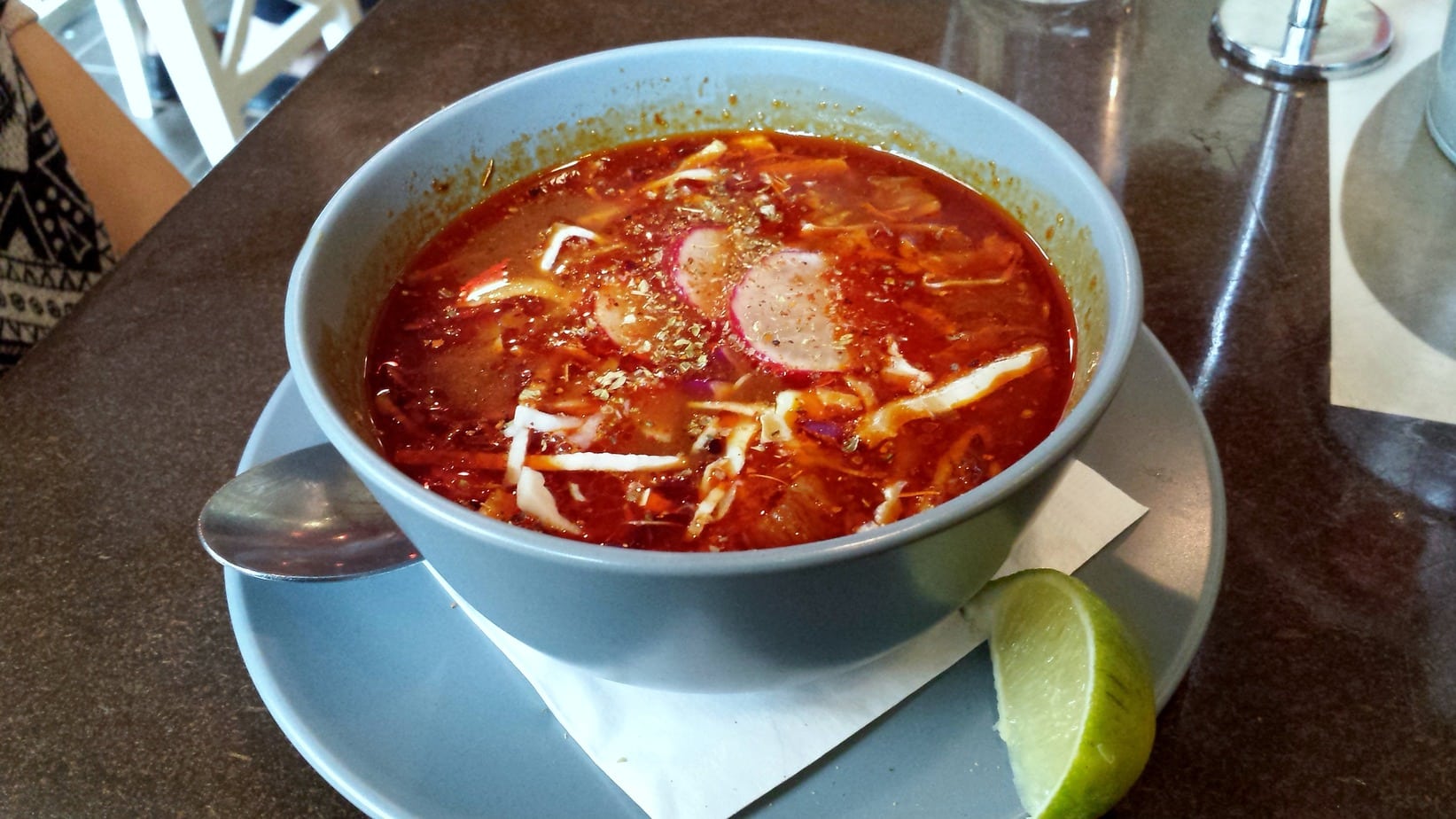 I chickened out and got the Pollo Tacos. The chicken meat was fresh and with just the right amount of heat for me even though I did add some salsa verde as well.  I was really hungry so I was worried that these tiny tacos wouldn’t be enough for me but they ended up to be quite filling. 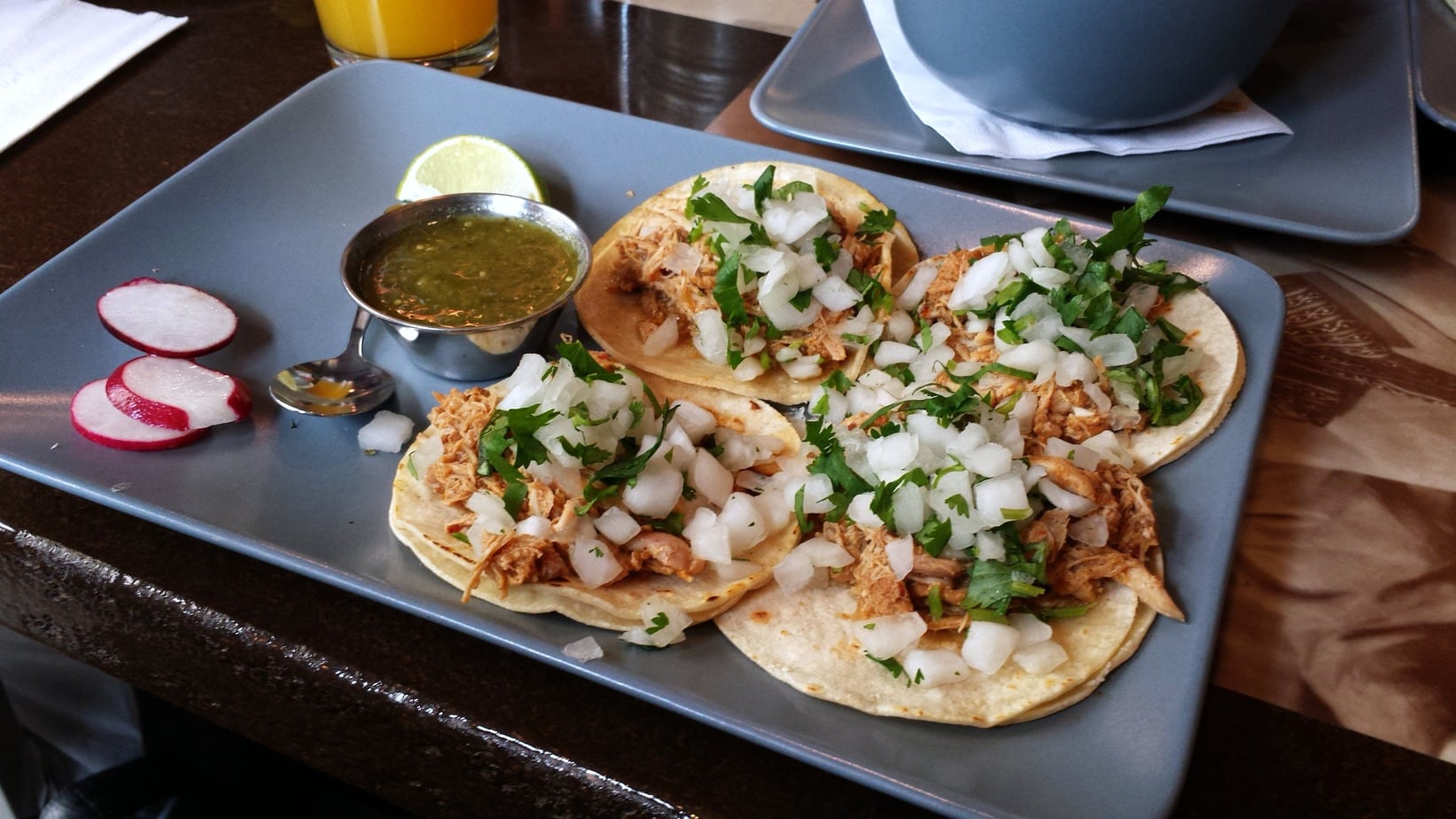 The guys both ordered Tinga Mixta; Chorizo and Pulled Pork Tacos with potatoes. I had one and it was a bit too spicy for me. Also, be forewarned, don’t wear your best shirt to Tres Carnales; these little tacos are quite juicy…hubby ended up having to change his shirt when we got back to the hotel.

Another cool thing about Tres Carnales is that they make a daily aguas frescas; refreshing mostly fruit flavoured water. When we visited it was Mango agua fresca and it was delicious. It would be great to try the horchata some time. 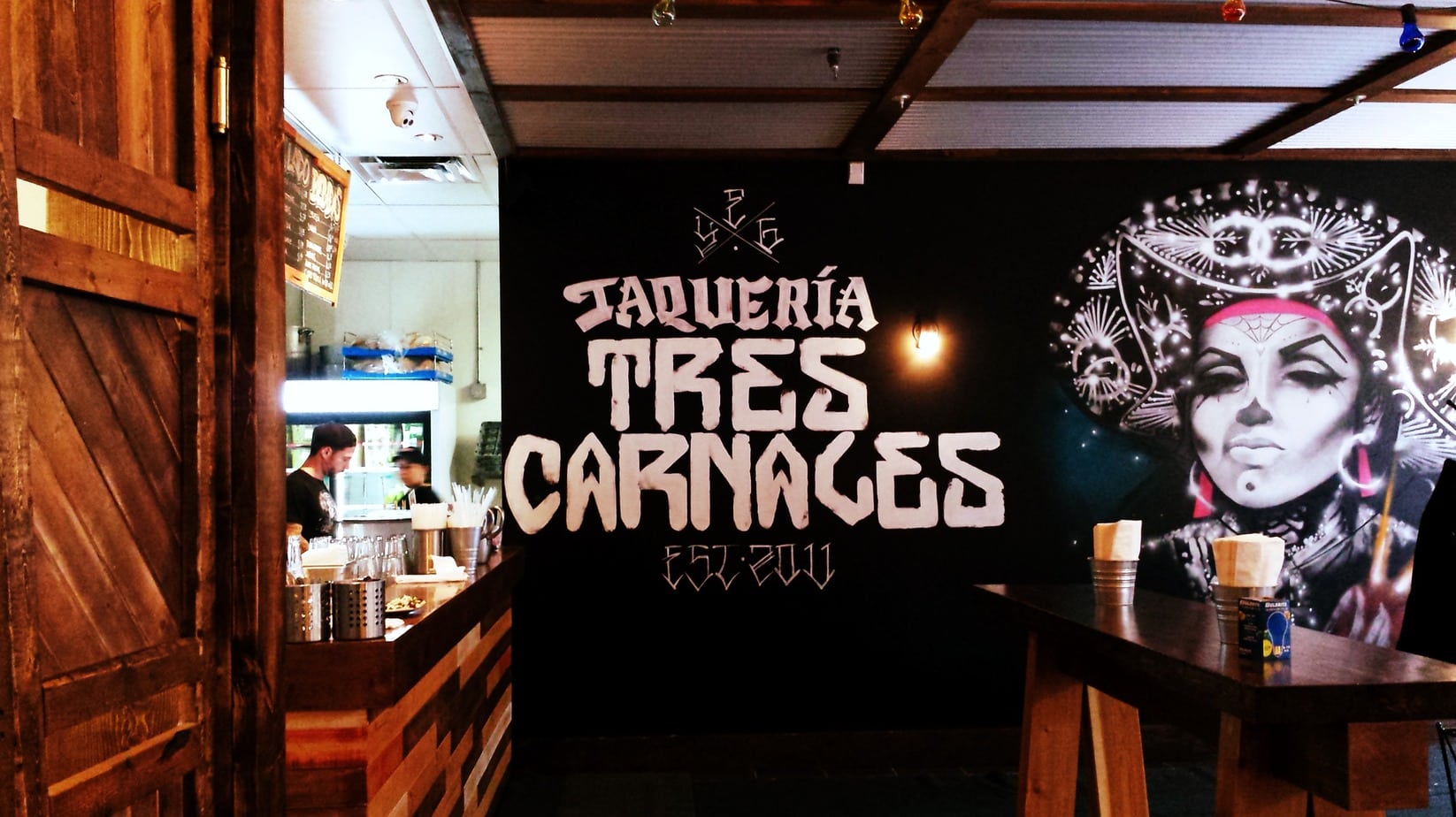 I think we may have just hit it lucky with the timing on this one (thanks hubby!) as it can get a bit busy and confusing in here at peak times. Our visit to Tres Carnales was a great start to our time in Edmonton…if only the Riders had come to prepared to play football it would have been perfect!