It really doesn’t feel right to me when I say to people I have a 19 year old son. It must be me denying my age, though really I don’t believe I am that old…not even 40 yet! Rare is the day when we all sit down for a meal together these days but even rarer when we all go out together. I am learning to savour the time that we have left until he decides to strike out on his own and make his way in this world.

One think I know for sure is, ‘kid’ number three NEVER turns down a sushi dinner so when we found out the new Kinjo Sushi & Grill in Millrise had finally opened we all couldn’t resist going out for his birthday dinner. Don’t get me wrong, the newer sushi places (Kinjo NW in Dalhousie and Millrise) will NEVER replace the MacLeod Trail location. The small more traditional sushi restaurant  is more of a true sushi experience with the sushi boat dominating the space. Due to health regulations new sushi establishments are not allowed to put in a sushi boat/train but the places where they already existed before the new rules are grandfathered in. The decor of newer Kinjo branches are very similar…Asian inspired, very roomy with an open style kitchen. Both have large wood blocked feature walls which I think are gorgeous, though the Millrise location also has a slate wall on one side which has been left ‘au natural’ and painted GOLD on the opposite side. Yeah, it’s a bit kitschy…

Our server was quite efficient though I found the flow of sushi really irregular and we were beginning to worry if we would ever see our tempura. We ordered Salmon and Tuna Sashimi; Tuna, Dynamite, Spicy Crunchy Roll,  Spicy Tuna Roll, Female Dragon Roll, Spider roll (soft shell crab); eel (Unagi) for hubby; Giant Squid Legs, Beancake and Seaweed Salad for me. Our calamari and prawn tempura came much later. The place was really busy and I think the kitchen still probably has some quirks to iron out..I felt our rolls (and the bean curd) were a bit sloppy and the rice was chewier than I like it. I also like to have a LOT of pickled ginger while eating sushi. We only had a tiny bowl of it for the whole table. 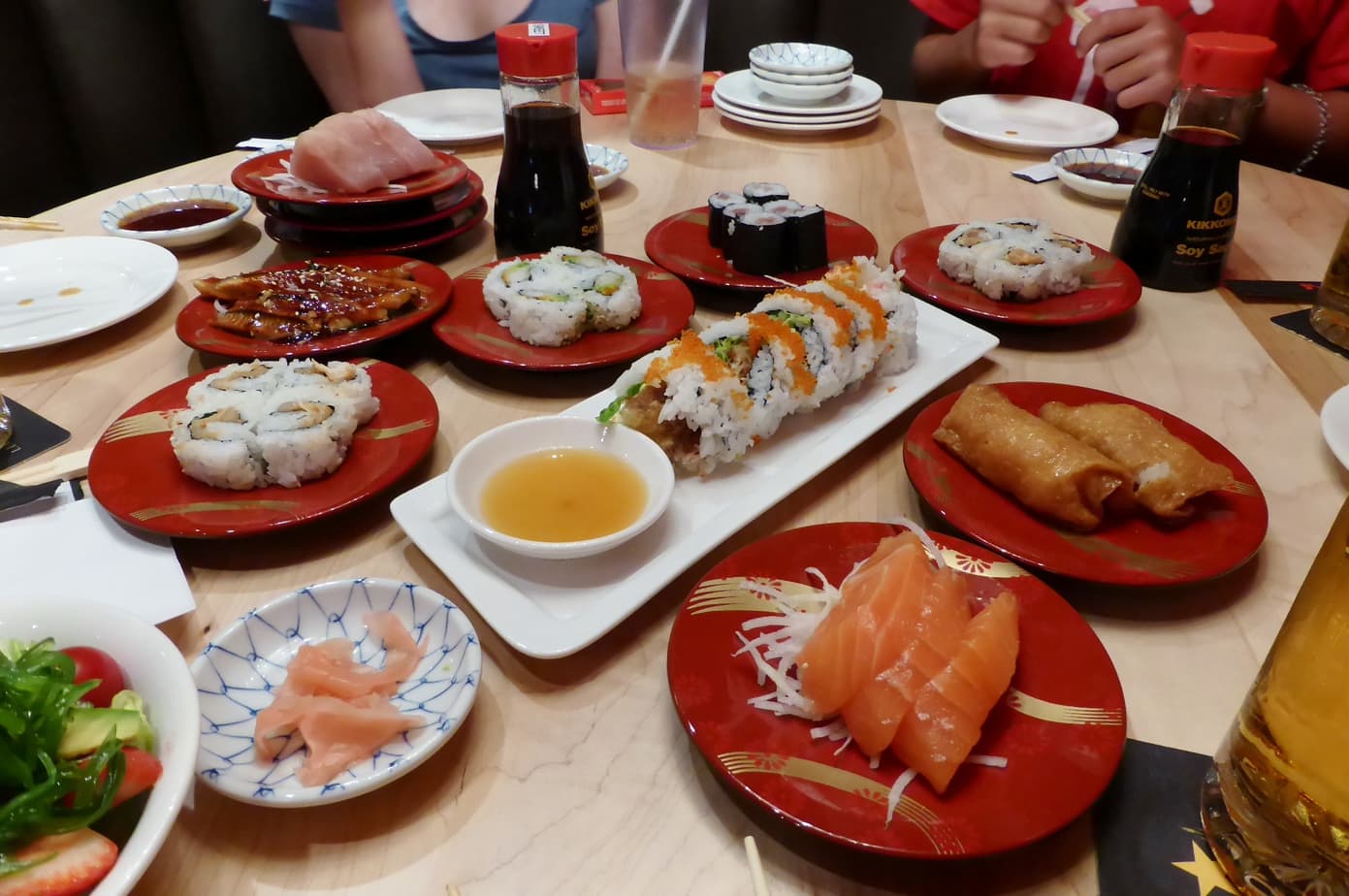 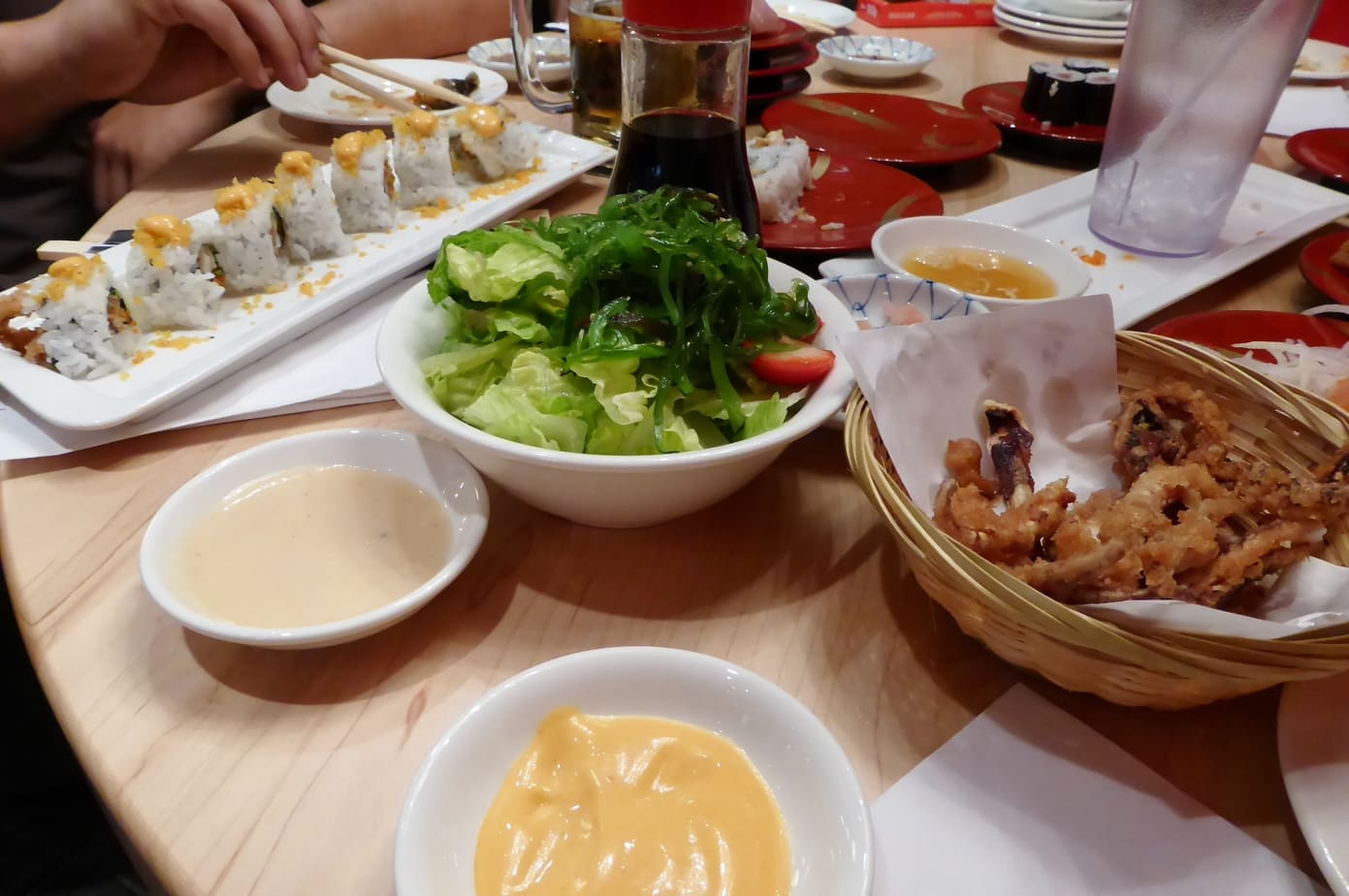 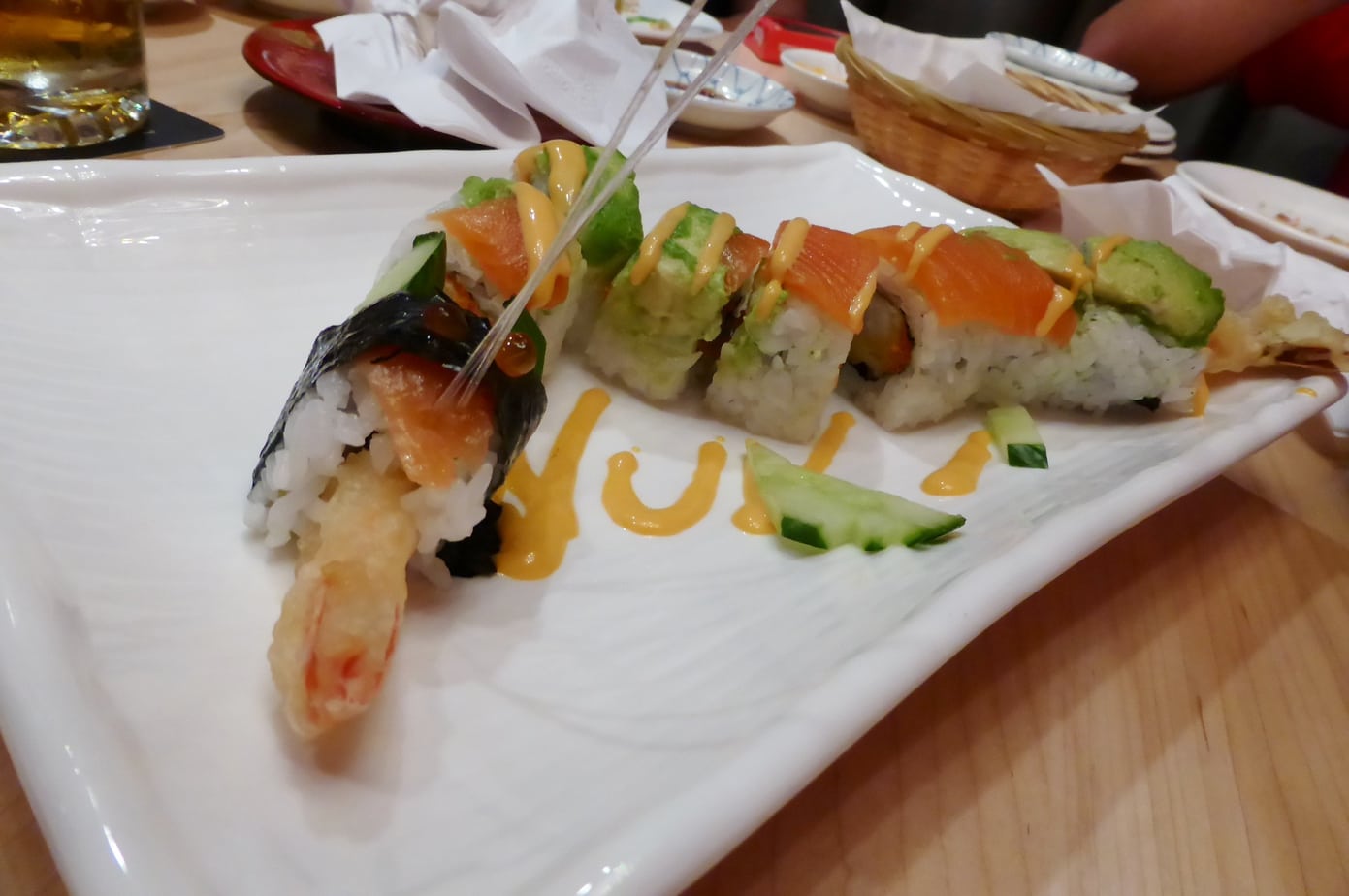 Peter Kinjo was there, entertaining people and waving ‘his knife’ around…my kids love it when he comes around and ‘bothers’ the customers. He always knows how to make people have fun with feeling uncomfortable by making them hold hands and other such stuff. If there is a birthday, all of the serving staff clap their hands and have a sing a long which sometimes drags on for a while and is impossible not to join in on. I always find myself singing and clapping along. And of course, to top it all off another server came around (I think he is Peter’s nephew?) to hand out a Pocky treat to the kids and me too. I always pick strawberry Pocky while they choose chocolate. I think they secretly miss the days when they were younger and they would get a carved monkey head orange sometime during the visit.  I saw some of these ‘orange monkeys’ on tables with small children so I guess they have kept that tradition alive too.