I’m not a native Calgarian so I just don’t get Stampede. I don’t get how people can eat deep fried ‘anything’..(including oreos and butter) or beef on a bun for weeks on end or even pancakes and sausage for breakfast every single day of Stampede. Sure there’s got to be some redeeming quality to the Stampede, after all it is a very popular North American rodeo and people come from all over the world just to watch cowboys get bucked off horses. Every year in July I try to book vacation for those two weeks Calgarians refer to as ‘The Greatest Show on Earth’. My idea is to ‘get outta Dodge’ and let everyone else get pretending to be a cowboy out of their system…

This year the boys were spending a week at the Canadian Scout Jamboree by Sylvan Lake. Kid number two and I decided a last minute road trip to visit Auntie R in Vernon, British Columbia would be a great way to get out of town. Vernon is in the Okanagan area of the province and is a semi desert. It is HOT and they have a couple of gorgeous lakes to lounge by. My sister is pretty darn lucky to be living there because she has access to one of the best areas in Canada for summer fruits and amazing wines.  During this early to mid summer season there are strawberries, blueberries, raspberries, cherries and the beginnings of the apricots at roadside fruit stands and farmer’s markets. My main goal was to bring home some (wine!) beautiful raspberries so I could make some jam. 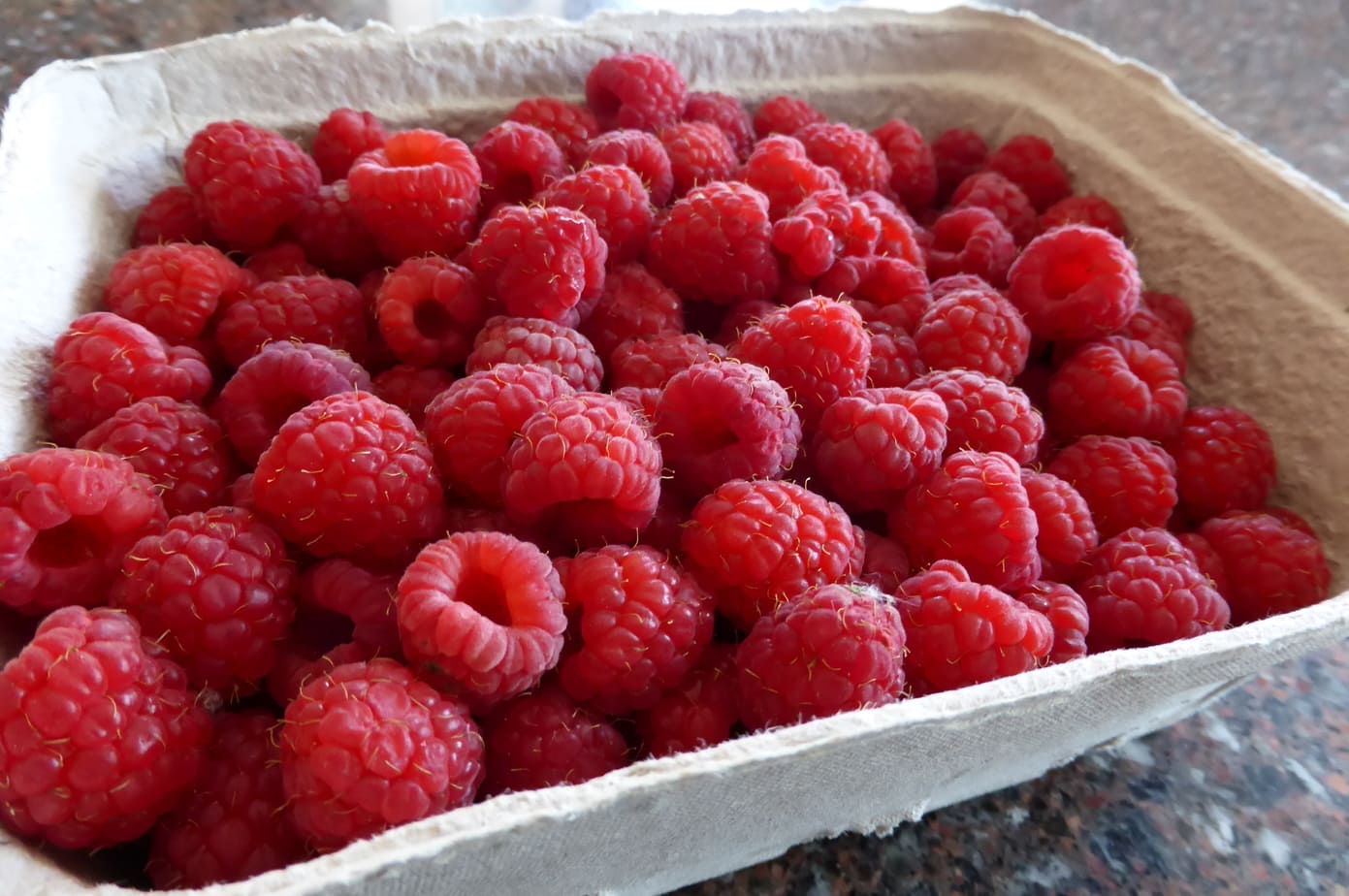 Other than the beach, there is not much to do in Vernon so we took a small day trip down to Kelowna to visit some wineries and ‘Farm to Table’ food producers. I bought some delicious cinnamon creamed honey at Arlo’s Honey Farm. 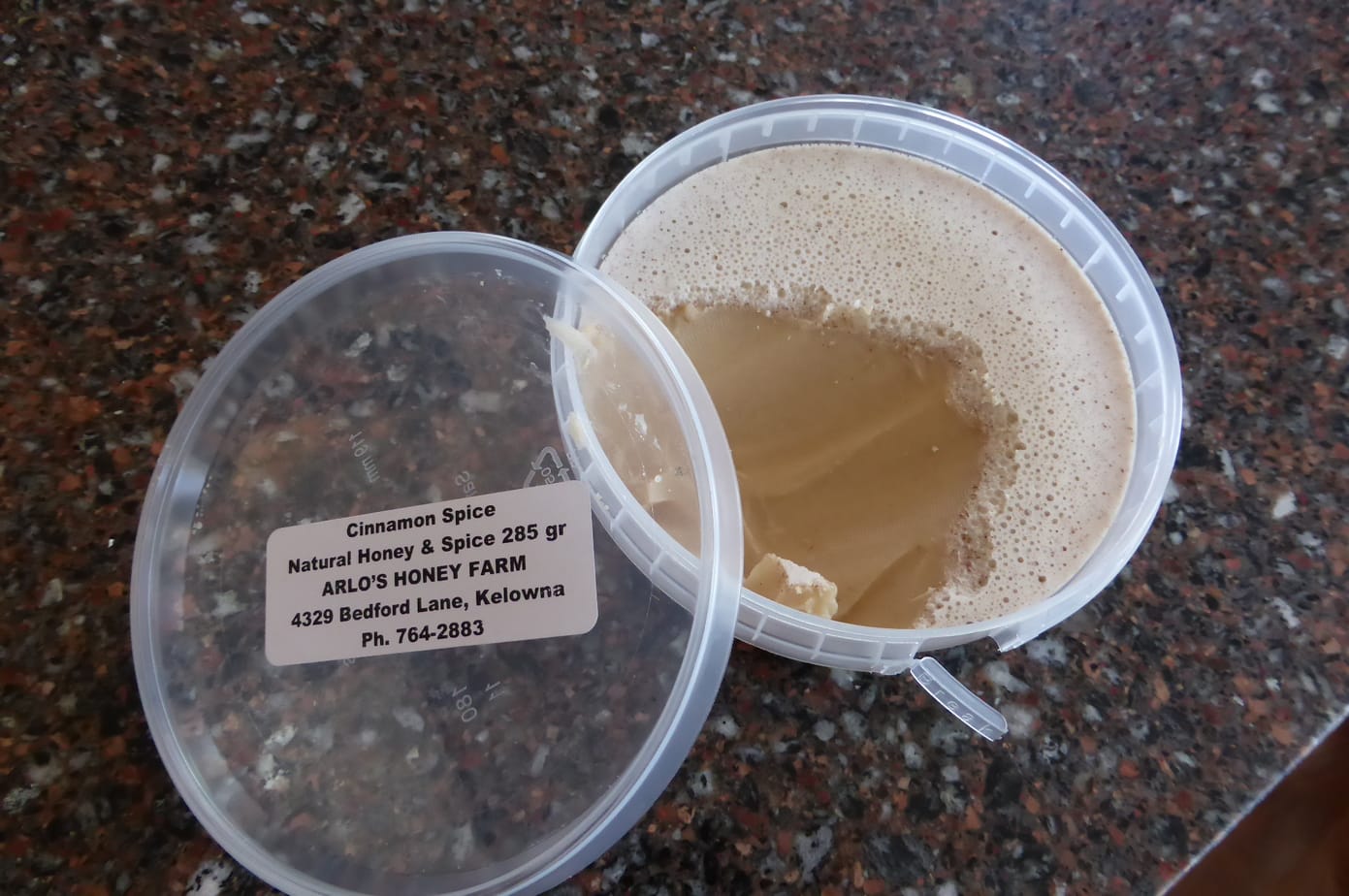 I was doing the driving so I couldn’t stop at too many wineries for tastings. I am very careful to limit myself to two swallows per winery. I found it odd that they didn’t have spit buckets available but then I guess that would be unsanitary….We only managed to stop at two wineries before kid number two became bored. Tantalus Vineyards was the first one we visited.  It was really quiet and I really appreciated the air conditioning because the temperature on the car thermometer was reading 35°C ! They have a gorgeous view and some beautiful West Coast Native masks  which they have photographed and used on the bottle labels. I bought a delicious 2012 rosé and a 2012 Riesling. I was a bit disappointed they didn’t have the Old Vines Riesling available at that time.  Next we visited Cedar Creek Estate Winery. What a lovely spot and the view over the vineyard is amazing. They have a nice looking restaurant and a pavilion overlooking the valley where you can attend yoga classes.  I purchased two bottles of the newly released 2012 Platinum Viognier. See, I already have that rosé chilled. 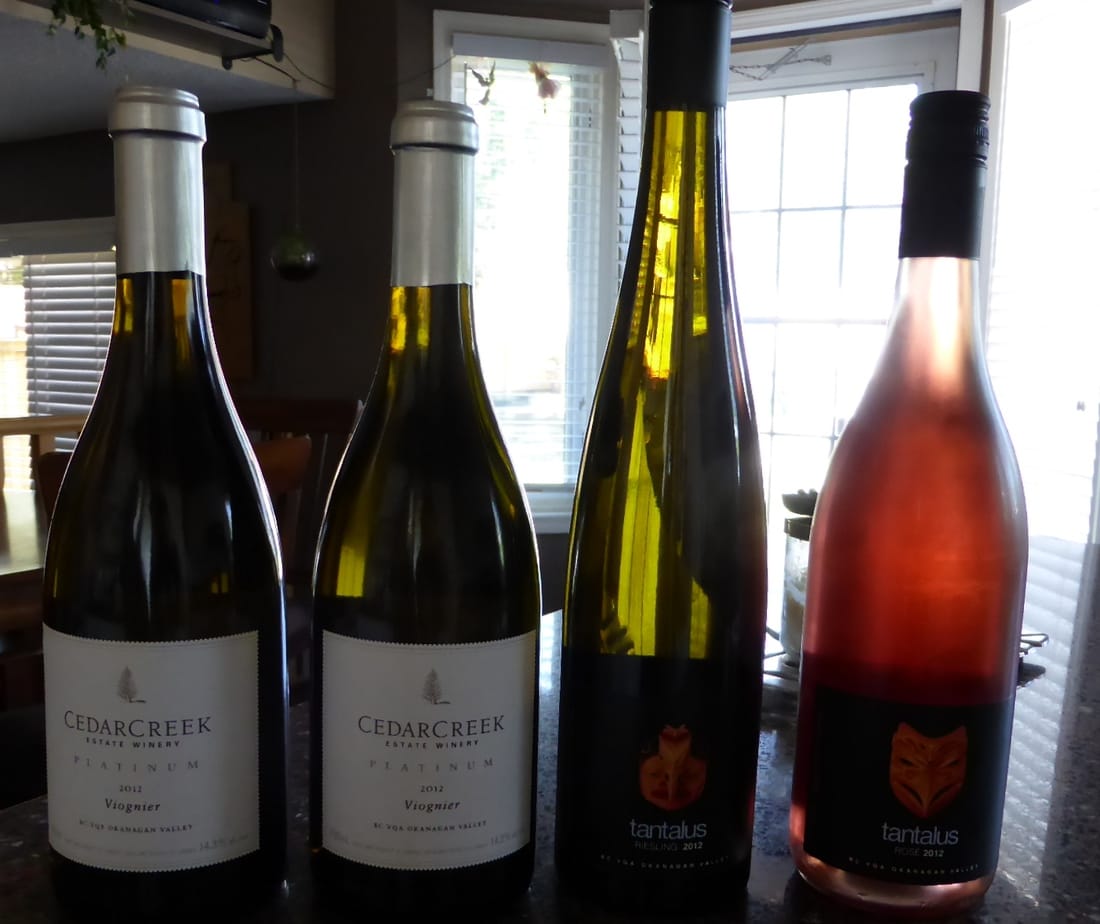 After the winery visits I decided we should go for a walk along the beach and find some geocaches. I was able to find four before we almost passed out from the heat and we definitely needed to cool down. If only there were some ice cream nearby…at Carmelis Artisanal Goat Cheese. Wow what a shop! I’m afraid we demolished our goat ice cream way to quickly to get a photo but I will say kid number two picked salted caramel and crème brûlée and I had crème brûlée with a side of limoncello. I think limoncello was the all out winning flavour but then I never did get a taste of her salted caramel. I was told it was the most popular of all the flavours. The ice cream was nice and creamy but there was that end flavour of ‘goat’ that lingered on after the ice cream was finished. 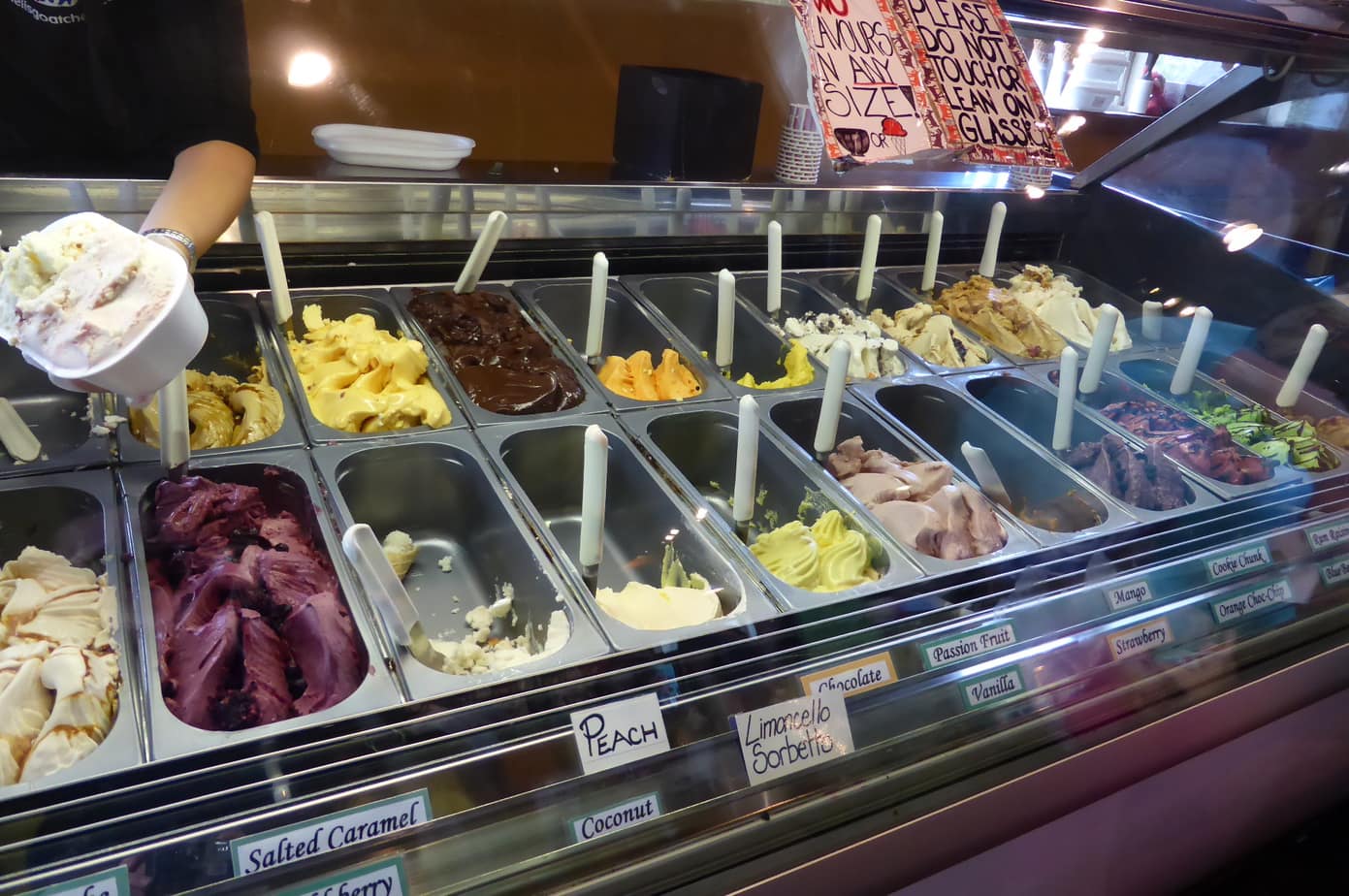 I didn’t partake in any cheese tasting as the counter was swamped with the same people asking questions the whole time we were there. In fact, it was really annoying as we had to reach around them just so we could get some cheese because they didn’t move at all for about ten minutes. I did manage to swipe some ‘Heavenly’ soft ripened goat cheese which we brought to a birthday party later. I was really nice and soft, with a light ‘goaty’ or ‘distinctive goat milk aroma’ as the website says. I also bought some of their popular dill and onion chevre style cheese and some labane which is a soft yoghurt style cheese great for dips and eating on pitas with olive oil, salt and pepper. I just couldn’t resist also buying some goat gouda. 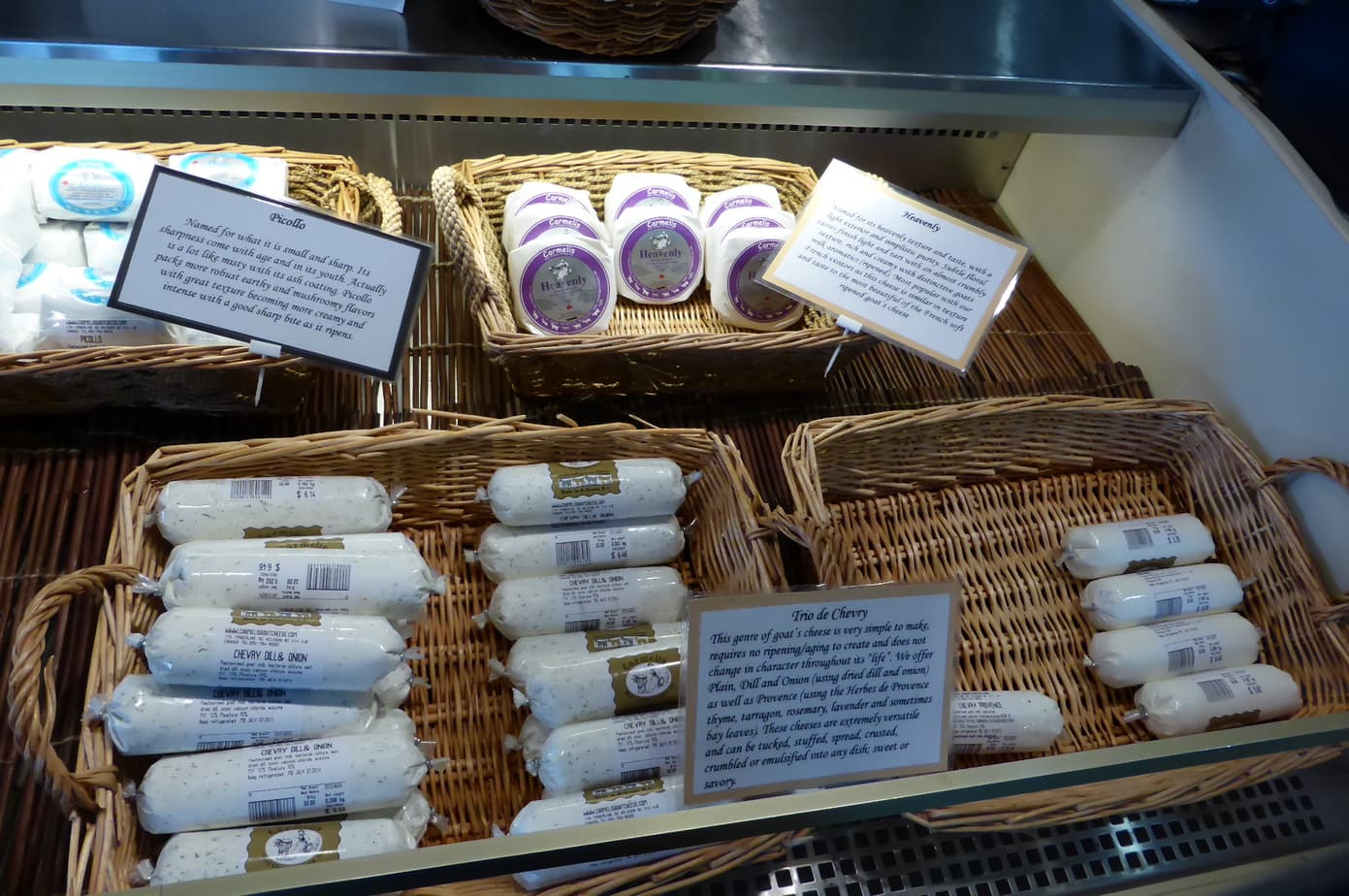 Finally, no visit to Vernon would be complete without a trip to Davison Orchards. In fact we went twice. The first time, we gorged ourselves on ‘applelanches’ and apple pie and the second time we just went for an applelanche. Davison’s Orchards has been a family business for four generations. They grow quality produce including 23 varieties of apples, six kinds of peaches, strawberries, raspberries, cherries, apricots, melons, as well as many different kinds of vegetables. You can buy the produce fresh or already preserved in jars or as various pickles, relishes, spreads, butters, or dips.During the summer they hold various canning and fruit related workshops outside. Today the ladies were canning some very delicious apricots for family use only. The preserved fruits and vegetables get preserved in a controlled, health regulated canning room. 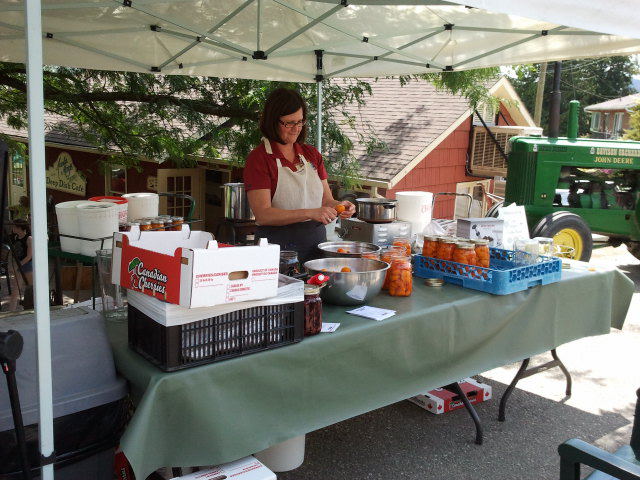 The best stuff though, is undoubtedly the all natural apple juice which you can buy in 4 L. jugs and the pies, tarts and cakes made with all kinds of family grown fruit. Davison Orchards are very proud to say that all of their produce is grown on their land and travels 0 miles until you buy it. They are the real deal. 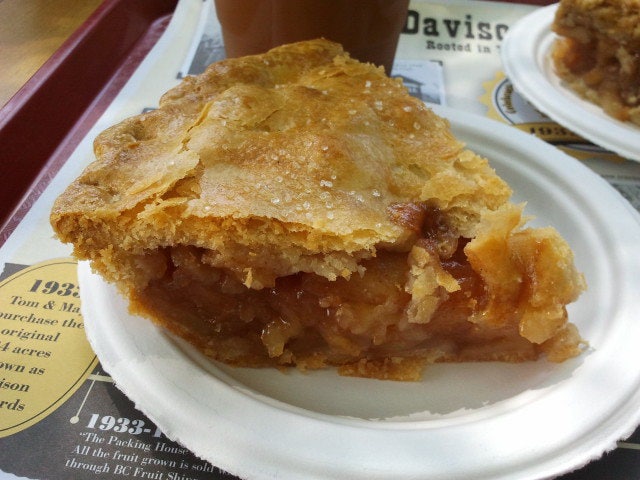