Our evening began with the Gypsy Kings and ended with Carlos Santana. In between we experienced the varied tastes of Mexico, some superb wines from Sokol Blosser, and great conversation with our dining companions. Michael Brown, a representative of Sokol Blosser, was on hand to give us a little bit of insight to the family run Oregon state wine makers along with some information regarding each of the evenings chosen wines.

Xocolat is a ‘Posh Mexican’ restaurant that aims to educate its customers on the finer points of Mexican Cuisine. As Sergio Ledesma (part owner and General Manager of Xocolat) explained, Mexican food can be much more than tacos and burritos…

Executive Chef and part owner, Eric Yeverino planned out a delicious and varied menu to accompany the wines of Sokol Blosser. Upon our entrance we were welcomed with a glass of the newly released Evolution Sparkling. It was light and crisp but also dry with a slightly creamy mouth feel. It was paired with a welcoming amuse bouche of guacamole and re fried beans atop a disk of very fresh cornbread.  I absolutely loved the cornbread and it disappeared all too rapidly for me to take a picture.

After we were all seated it wasn’t long before our tour of Mexico began with Guerrero, the state within Mexico that includes the city of Acapulco. From that area we enjoyed a sable fish ceviche with avocado and cucumbers. The ‘brine’ for the sable fish was a mixture of cucumber juice and chile agua (water). Dotted along the top were small slices of puya pepper which packed a bit of a punch. Not to worry though, the slices of cucumber were just perfect for a cooling effect. The accompanying Sokol Blosser Evolution White was a superb pairing. I found that the slight sweetness of the 9 grape blend was just what was needed to diffuse the heat of the peppers. 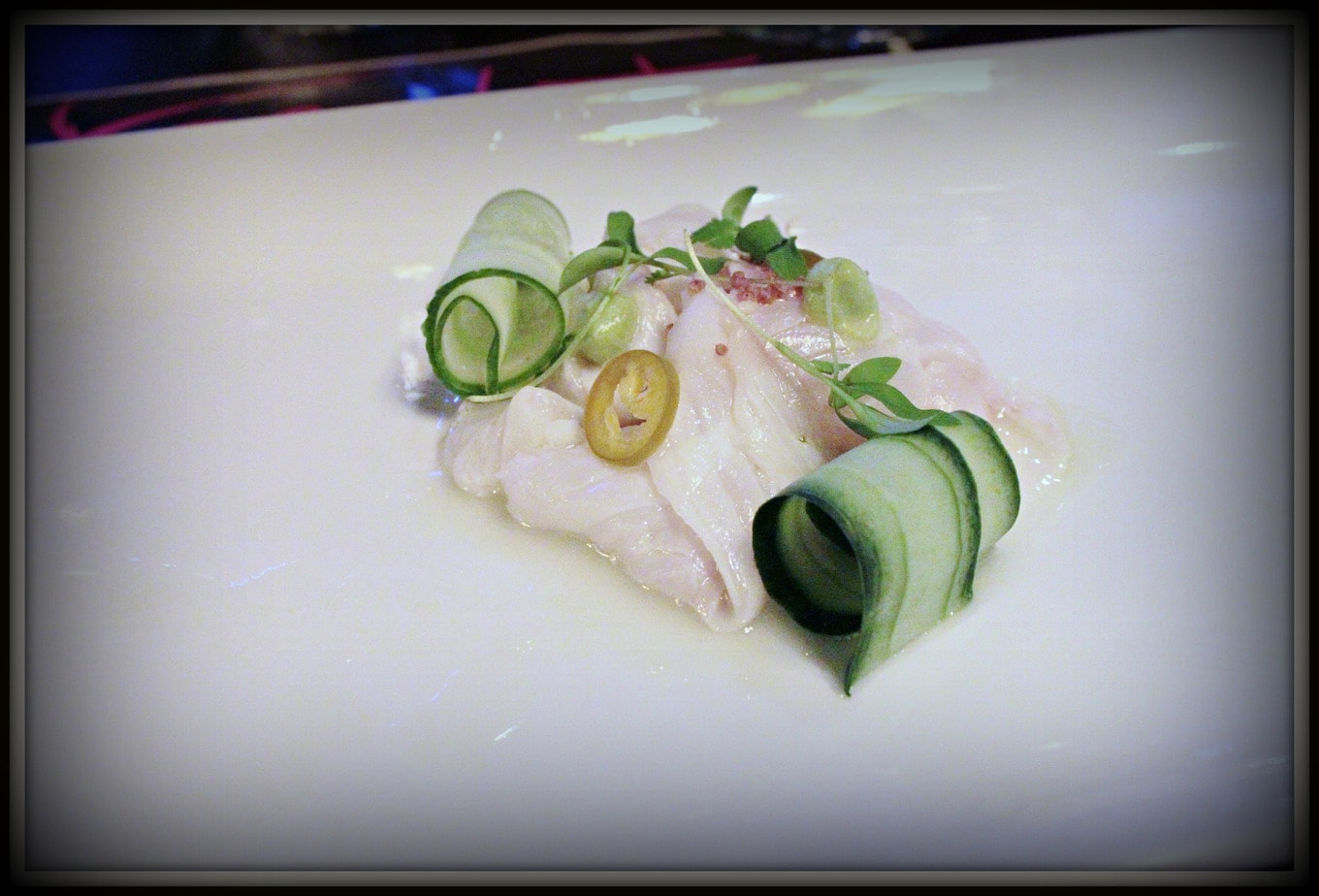 I was a little dubious about the next course. It sounded quite ‘North American’ to me but it turned out that is just what Chef Eric wanted us to think. Wild Mushroom ravioli, with more wild confit mushrooms, pickled red onions, and balsamic pearls. Does that sound Mexican to you? Well apparently the state of Mexico is a well known hotbed for fungi growth, including the ubiquitous ‘magic mushroom’. While we did not partake in any funny business, we did enjoy one very tasty mushroom ravioli. At first I was not convinced the Sokol Blosser Pinot Gris was a good pairing. I think I first tried it with the mushrooms only and found that it fell a little flat. However, when I tried a bit of each element on the plate I felt that the wine was really nice, especially with the more acidic elements.

The Sokol Blosser Pinot Noir was very soft in tannin and I was in love with it’s mocha component. The third course pairing of Beef Short Rib Taco on a chocolate corn tortilla and Strawberry salsa was offered as a reflection of the berry and mocha notes in the wine. Though this course was a playful offering from the Chef and from Xocolat in general, I have to say that this was my least favourite dish of the night. It might be my preference of taste but I just can’t get past the used of chocolate in a savoury manner. Maybe if the corn tortilla wasn’t already so sweet and it had a more bitter chocolate flavour. I don’t know. I did really enjoy the strawberry salsa.

Thankfully the evening ended on a high note, the fourth and final Pork course paired with Evolution Red. One touch from my fork and that pork was gently falling apart almost like butter. Just like Pavlov’s dog and the bell stimulus, my salivary glands are trained to operate when I see such perfectly cooked pork in action. Apparently such a dish is common in Mexico City and now I am thinking…of all the places I’ve been, how have I missed this porky mecca? The pork loin in pastor sauce was the delicious element on the plate. I’ve never had an onion puree before but I was a bit confused at how little it tasted of onion, in fact it was quite bland as were the pineapple globules. Though they were designed to explode in our mouths, they were a bit more like the onion puree by the time I tore my focus away from the pork. One of our group remarked that they tasted more like apple sauce which in hindsight is perfectly acceptable with pork. 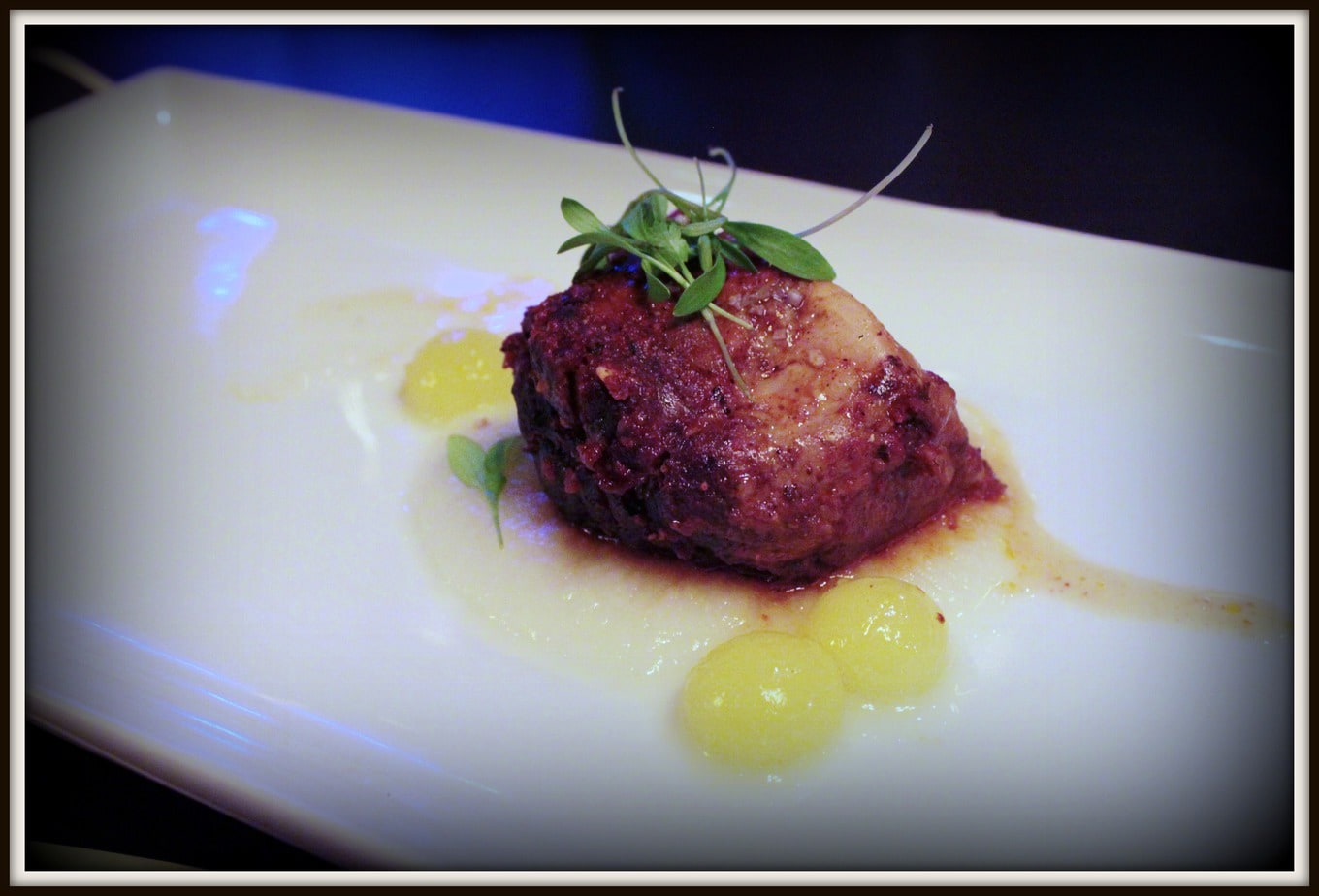 Both hubby and I really enjoyed our night. The service at Xocolat was superb, as were the wines and company we kept. We ended up ordering several bottles of Sokol Blosser Evolution (White and Red) to share with hubby’s parents who are coming for a visit this weekend.

After a fabulous night of wining and dining we made our way home still craving a bit of chocolate (Xocolat?). We remedied our cravings with a nice slice of chocolate cake and a glass of milk in our very own kitchen. I can’t wait to go back to Xocolat to try more of their regular menu which I know includes some very outstanding desserts.