Baharat Roasted Beet Hummus is a great tasting vegan/gluten free snack easily made with common ingredients and spices you have on hand. Make your own Baharat spice blend or adjust using your favourite spices.

This beet hummus recipe has it all…great flavour using easy to find pantry ingredients and hardy root vegetables. Both main ingredients are great to keep on hand for when that hummus craving hits hard. The chickpeas blend up so smoothly with the tahini, olive oil, and added roasted beets. The flavourful spice mix, Baharat, really compliments the flavour of the beets and gives this dip massive snackability. 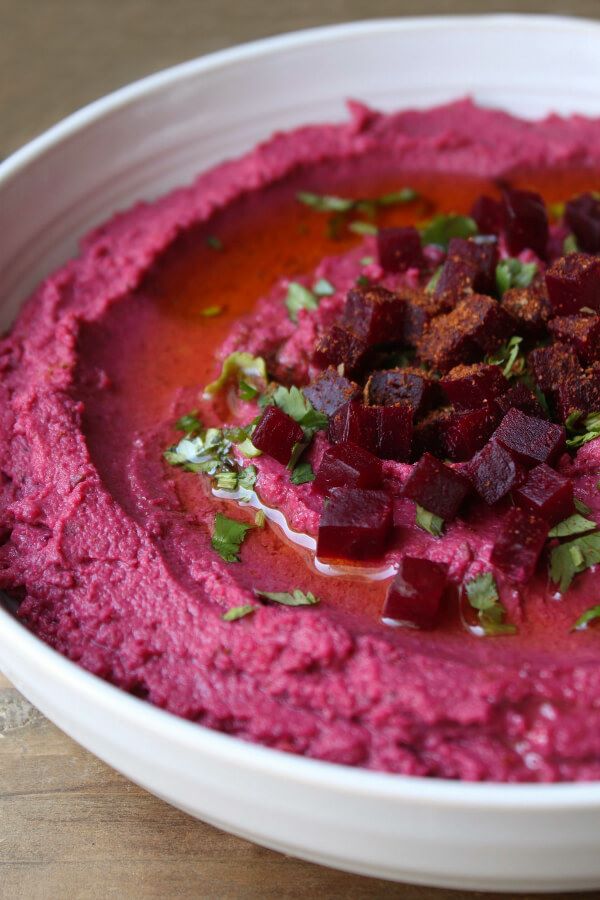 The colour of beet hummus is such a striking and unique pink colour that it is hard to miss on any mezze platter. I first had it at a local Greek restaurant and was immediately smitten that I had to try making my own version. Sometimes, all I need for a great meal is Lemon Roasted Potatoes dipped in Beet Hummus! To make it even healthier, add a great Tomato Cucumber  Salad packed full of veggies! 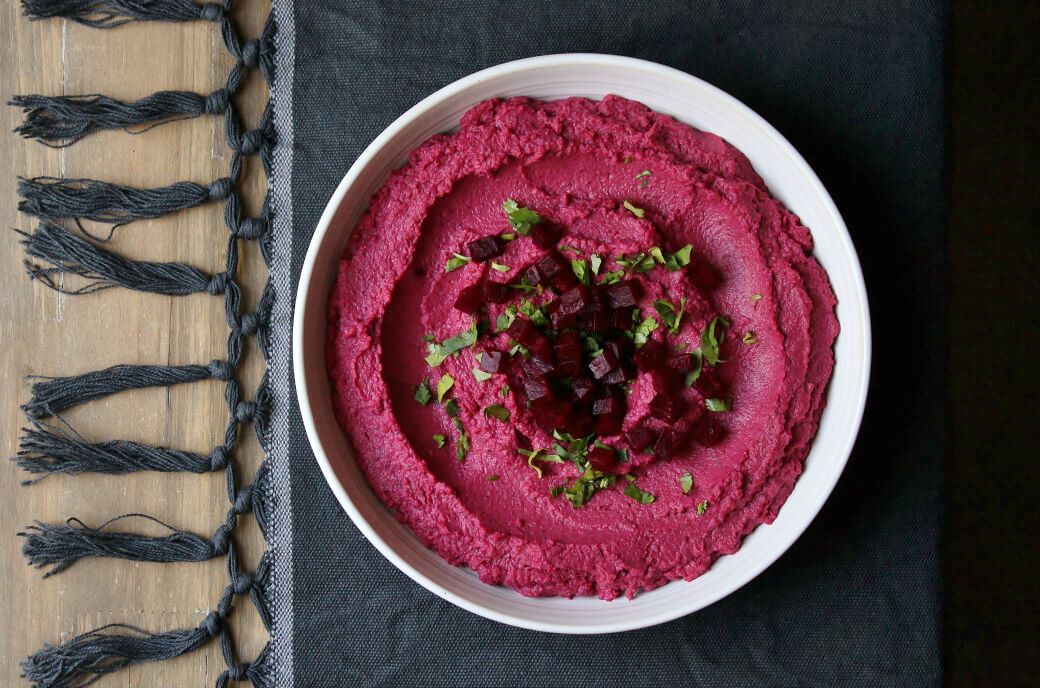 Other spices that can be included in Baharat include: allspice, cassia bark, turmeric, saffron, ginger, and chili peppers. Sometimes herbs such as mint (Turkish blends), flowers such as dried roses (Tunisian blends) and dried black limes (some Arabic versions). 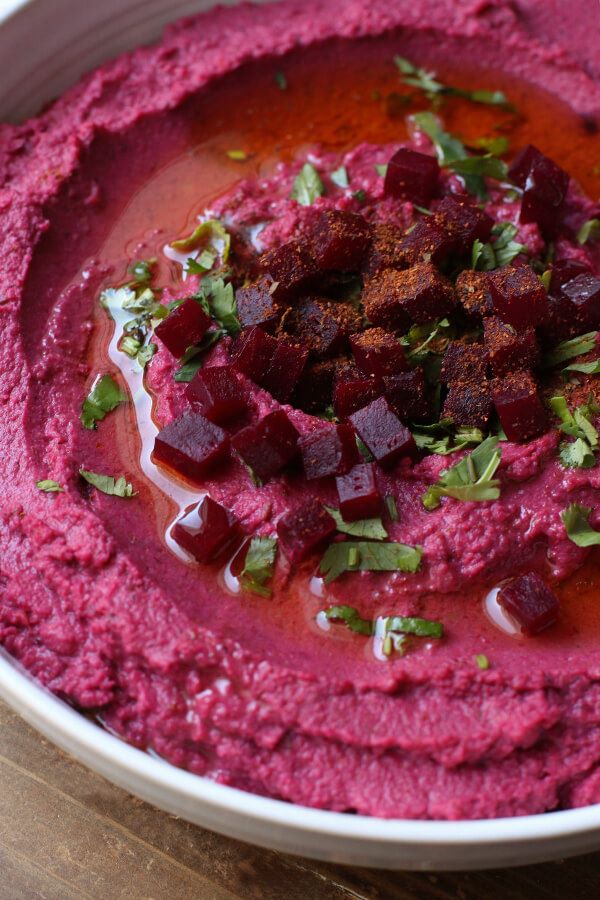 Baharat is typically used as a rub on chicken, lamb, and beef or as a seasoning for fish, soups, and stews. It can also be used as a condiment to finish the flavour on a dish.

How to Make Your Own Baharat

Since Baharat is simply a spice mixture, it’s fairly simple to make on your own using spices from your own pantry. Simply blend equal parts ground cumin, cinnamon, and paprika. Then add cloves and nutmeg in smaller amounts to taste. For example, if you add 1 tsp cinnamon, cumin and paprika only add 1/4 tsp each of cloves and nutmeg. As with all spice blends, it’s important to use the freshest spice possible to produce the best flavour. 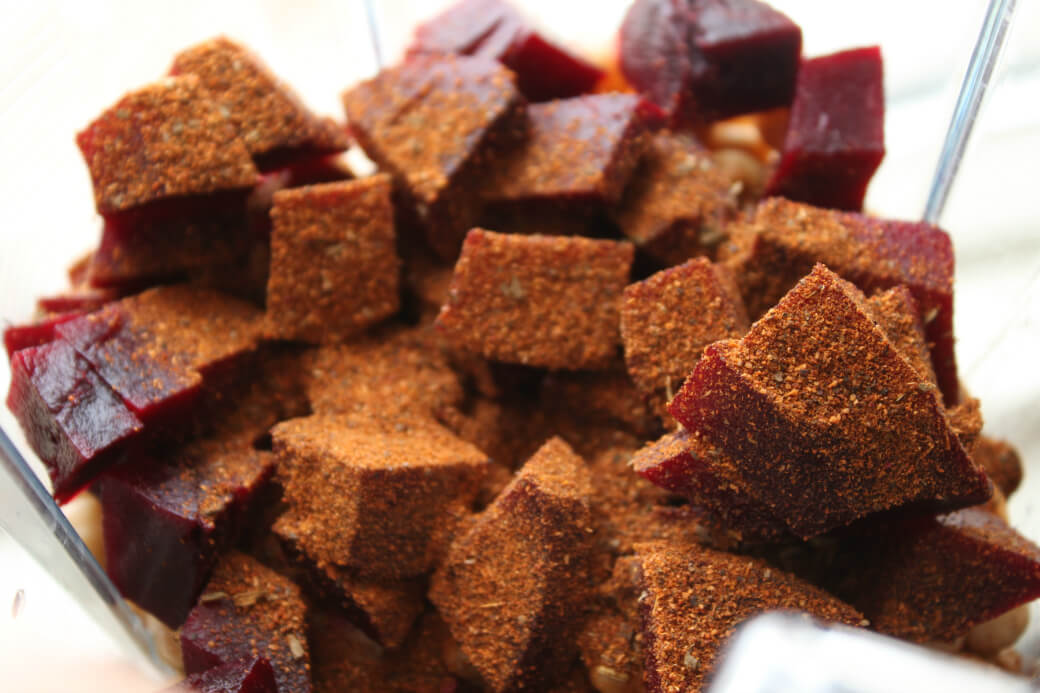 How to Make Roasted Beet Hummus

As the beets take the most amount of time in this recipe, I always begin by roasting them. Preheat your oven to 375 F. Peel and chop the beets into small equal pieces (around 2 inches). Place beets on a sheet of foil (or in a roasting dish) and season with salt and pepper. Drizzle olive oil over and wrap them up tight. Place foil packet on a baking sheet (or cover the baking dish with foil) and roast for an hour. If you prefer, you can use canned beets or steamed beets but I like the extra sweetness of roasted beets.

Next, toast the cumin seeds in a hot pan until fragrant. Remove from pan. I add extra cumin because I love the flavour. You are welcome to skip this step if you like. 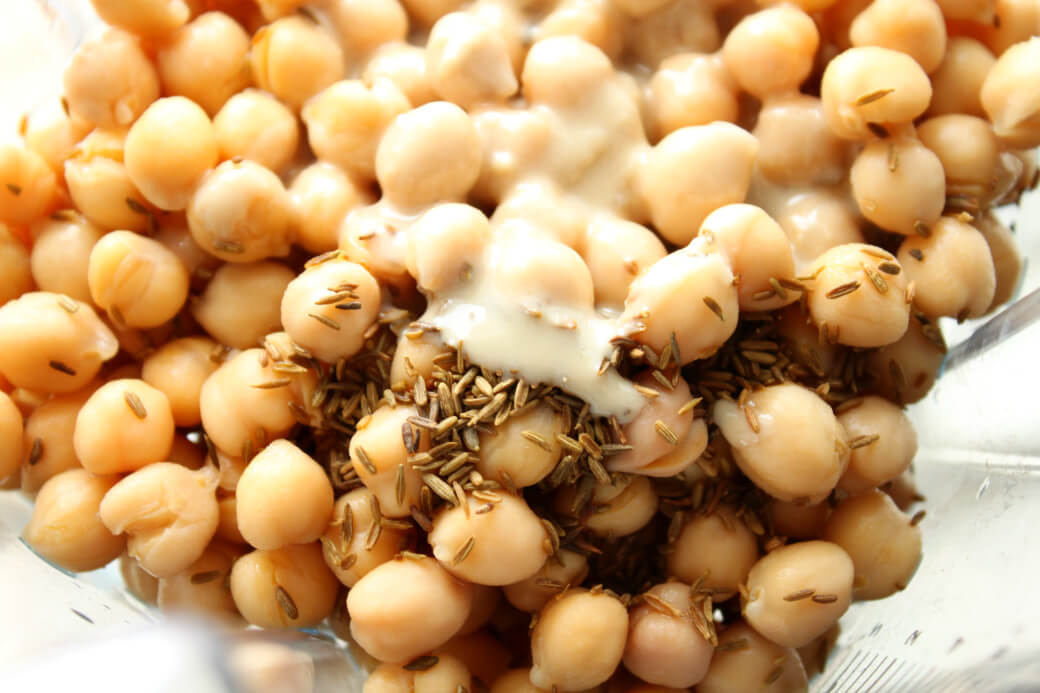 Finally, add the chickpeas, cumin seeds, tahini, salt, Baharat, beets (reserve a few for garnish), lemon zest, lemon juice to the bowl of a food processor or blender. Blend, then drizzle in olive oil until the mixture becomes slightly fluid.

To serve, arrange the hummus in a serving bowl. Finely dice the reserved beets and scatter on top of the beet hummus. Drizzle olive oil and scatter chopped parsley for the final touches. 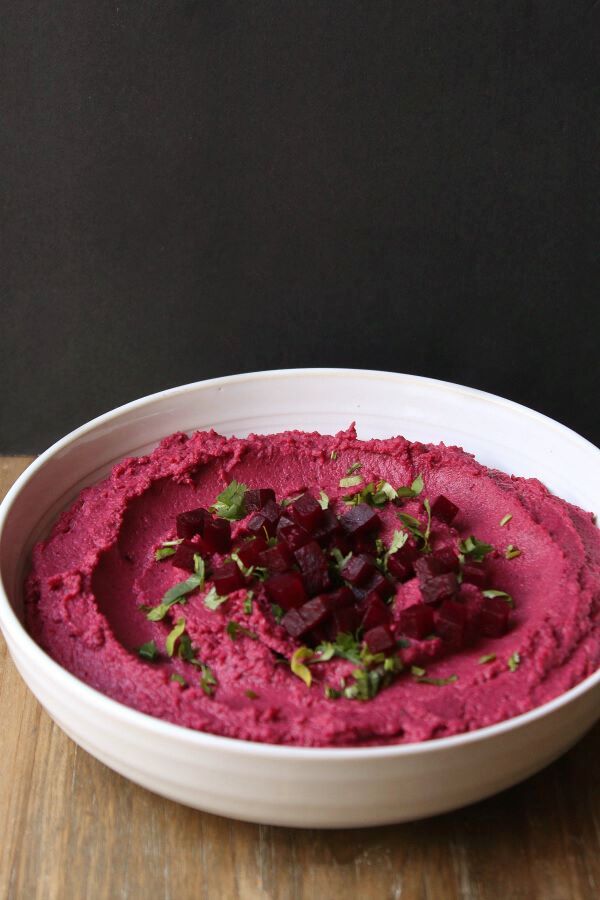 How to Serve Beet Hummus

There are so many ways to eat this Beet Hummus! The simplest (and my favourite) is use it as a dip with tortilla chips. Pita chips are probably more traditional. This dip is also great with roasted potato wedges or raw veggies, and spread on a tartine or on a sandwich.

How Long Will Beet Hummus Keep?

Serve this beet hummus right away or keep it tightly covered in the fridge for up to a week. It probably won’t make it that long but you never know! 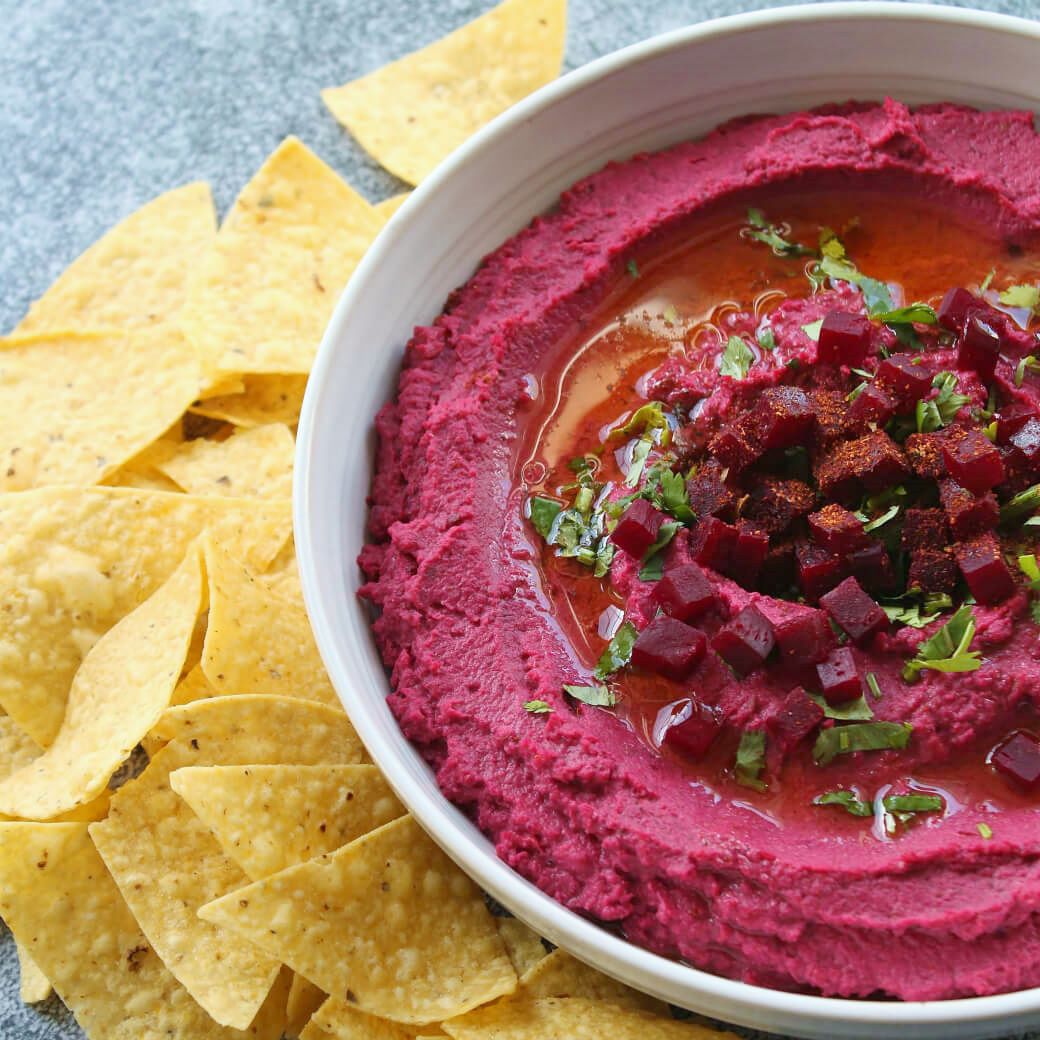 Can I Freeze Beet Hummus?

You sure can! Freeze the hummus in an airtight container for up to six months, not forever. You might find it handy to freeze it in portion sized containers and thaw them when the hummus craving hits. Once thawed, it should be consumed within 5-7 days.

Don’t worry if it has separated during thawing, just give it a good stir and it should go back to normal. Additionally, if you find that the flavour has become duller after freezing, add a bit more Baharat and lemon to perk it up. 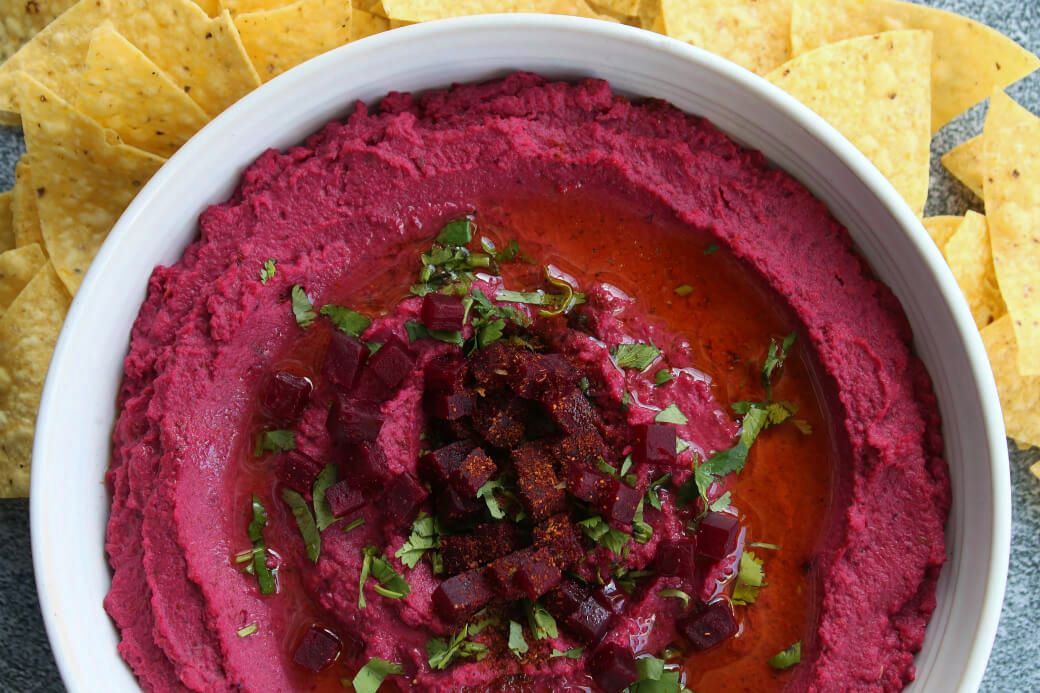