You know, it never occurred to me to ever post my mac ‘n’ cheese recipe on the blog before today. I’ve been making it for my family for so many years that it just seems like an every day dish…and it is an every day dish, but it’s oh so good! Since there are no boxed mac ‘n’ cheeses allowed in this house I’ve had to teach each kid how to make it our way.

It’s pretty easy, though not as easy as the boxed stuff and it does make a bit of a mess but really who cares? It’s so cheesy and good that when the craving hits, I would dirty every pan in my house to make it.

Lucky for you, you only need one pan!

I just happened to make slow cooker pulled pork yesterday and I had a tiny bit left over. Though I usually like my mac ‘n’ cheese straight up, I thought if I could combine it with pulled pork it could become something really special. Now here’s the thing. I never use a recipe for my pulled pork. I make it different every time throwing whatever suitable ingredients I have in the kitchen into the crock pot. There has been the odd time that the pulled pork wasn’t up to standards but mostly it turns out just fine. Here’s what I think I did for yesterday’s pulled pork. 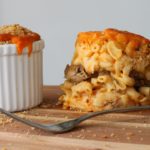 FOR THE PULLED PORK FOR THE MAC N CHEESE

To make the Mac ‘n’ Cheese Surprise, spread a small layer of mac ‘n’ cheese in the bottom of a tall ramekin. Add a layer of pulled pork, then another of mac ‘n’ cheese. Top with breadcrumbs and shredded old cheddar. Bake in 350 F oven for 30 minutes.