I think it’s true what they say about chefs fingers being impervious to pain. They are able to reach into a saute pan and flip over meat with their bare hands with barely a flinch and eventually they lose the burning sensation all together. But as I sit here typing this my delicate little fledgling chef fingertips are throbbing in pain. I’ve just finished making my Nanking Cherry Jelly for the second time. Yes, two days in a row and I don’t think my fingers can take anymore.  No matter how many fancy canning gadgets and ‘helpers’ I buy, I always end up using my bare hands (or a wet tea towel) during the crucial part of getting those lids on nice and fast. No other tool is faster than my hands, unfortunately.

Let’s rewind back to three days ago shall we? Back when I still had all my fingerprints. Kid number two and I went geocaching and found more than we bargained for.  Bushes FULL of Nanking Cherries in a public location just ready to be picked. We marveled at our good fortune and returned the next day with a 4 L pail. It was 30°C   in the sun and we picked until the pail was overflowing and my arms were bleeding from so many scratches. Kid number two was not impressed with me. 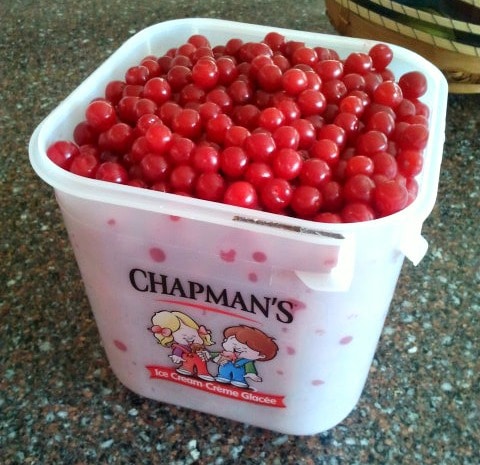 How to Begin a Batch of Nanking Cherry Jelly

We returned home and later that night I gently washed the very ripe cherries and boiled them in a pot for about 15 minutes so they would release their ruby juices. I folded up four layers of cheese cloth and got hubby to pour the cherries and their juices through the cloth and into a bowl. Together we strung the cherries in the cheese cloth up onto one of our top cupboard handles so more juice could be strained into the bowl overnight. The worked fine except when the kids came down for a drink there was no way for them to get a glass.  Being ever inventive (necessity is the mother of invention) they decided to have a bowl of water instead. 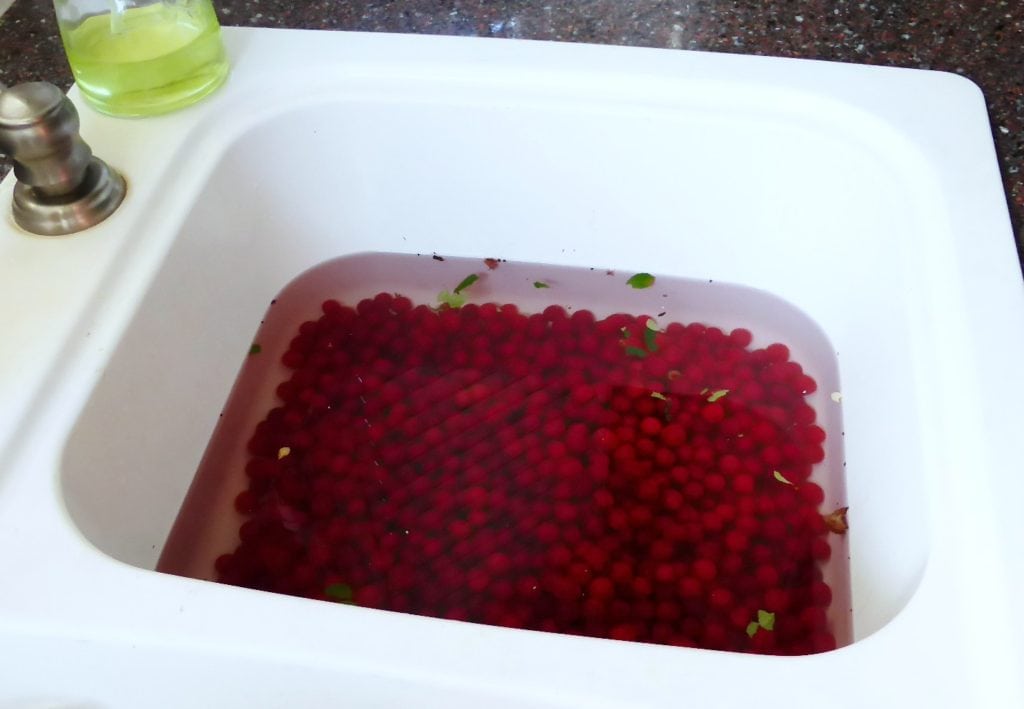 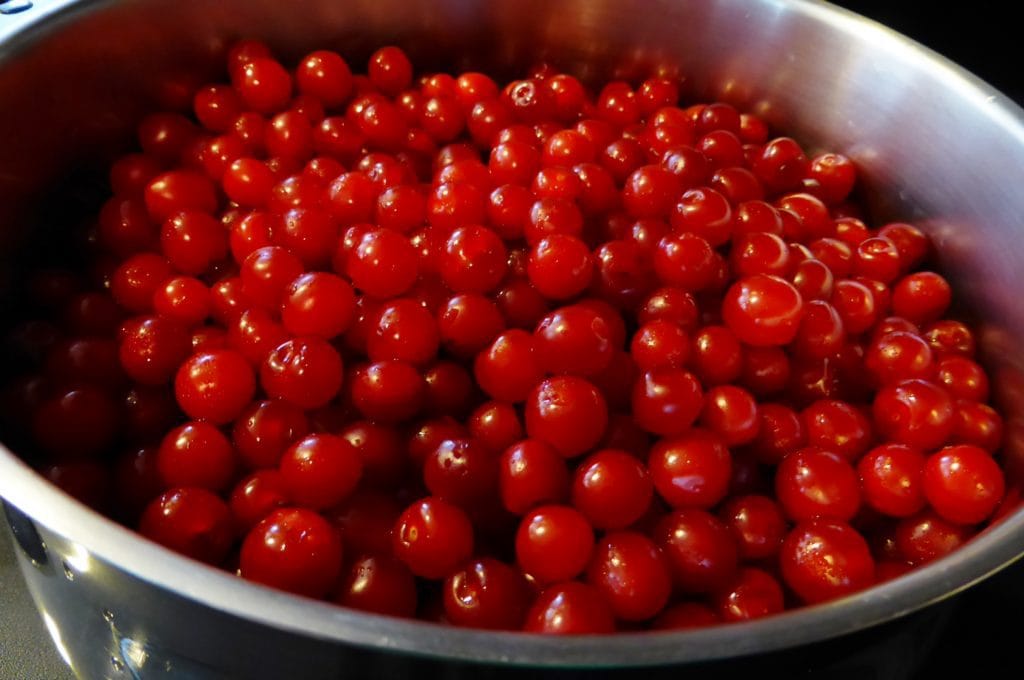 The next morning, I came downstairs to find just shy of 8 cups of Nanking Cherry juice had dripped into the bowl. Since my recipe was for 6 cups only I decided to set aside the rest so that I could make syrup later. 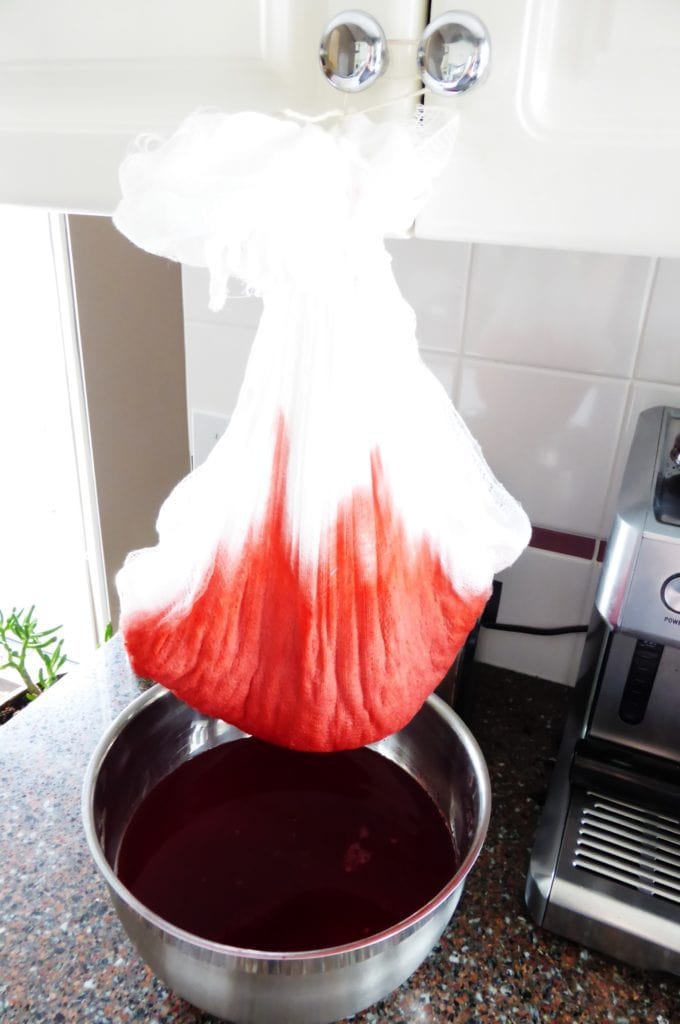 I washed and set the jars upside down in a tray of water in the oven, set at 225°F. The washed lids and rings went into a pot of boiling water along with the tongs and measuring cup. I sterilize everything that will touch the jelly or jars during the process of filling the jars in this manner for ten minutes.

After the mixture had come to a good boil I added all of the sugar at once and brought it back up to a rolling boil. The boil has to be fierce for about a minute or longer. I found out later the best way to know if your jelly is going to set is to take some out in a tablespoon at this stage and when it cools it will either set or it won’t.

When it has boiled to the correct temperature (fierce boil) I remove the pot from the heat and stir for a while, skimming the foam off the top.  Then the real work begins.

I grab the little jars two at a time out of the 225°F oven and the previously sterilized glass measuring cup and start filling the jars, careful to not get any jelly on the rims. Once they are filled (minus 1 cm of head space) I grabbed the lids out of the pot of boiling water with the tongs. Sometimes the lids stick together and it’s a huge nuisance. All this is to be done as fast as possible so the jelly stays as hot as possible for proper sealing. Sometimes I also have a hard time getting the rings on. They love to go on sideways and get stuck and I have to fiddle around with them. Extremely frustrating! And yes, this is where I use my bare hands on boiling jelly jars. This is where hands are king unfortunately. But making jelly is fun!!!

I had a lot of jelly and it took a while to fill the jars. Mistake number two; not re-heating the jelly soon enough. I did think to re-heat the jelly to the proper temperature but by then I was almost done filling jars. Coincidentally, the large jar that I filled right after I had re-heated the jelly was the only one out of the whole batch that set.

After the jars were filled, I went about all my regular daily business (coffee and computer) keeping my ears trained to listen for the sound of jars sealing. There is almost no better sound in the world. It’s like when you open up a new can of tennis balls…Anyway about 2/3 of the jars sealed which meant I either 1) tightened the rings too tight or 2) let the jelly cool down too much. All these tips are good to have in hindsight.

Hours later I moved one of the cooled jars to find that my jelly was still mostly liquid and my heart sank. All that work and expectation just went out the window. The jelly might have too but I am extremely stubborn and I was determined to have cherry jelly made from scratch.  So I set about on the interwebs and found an article about how to fix un-set jelly.  Okay. I can do this, AGAIN! 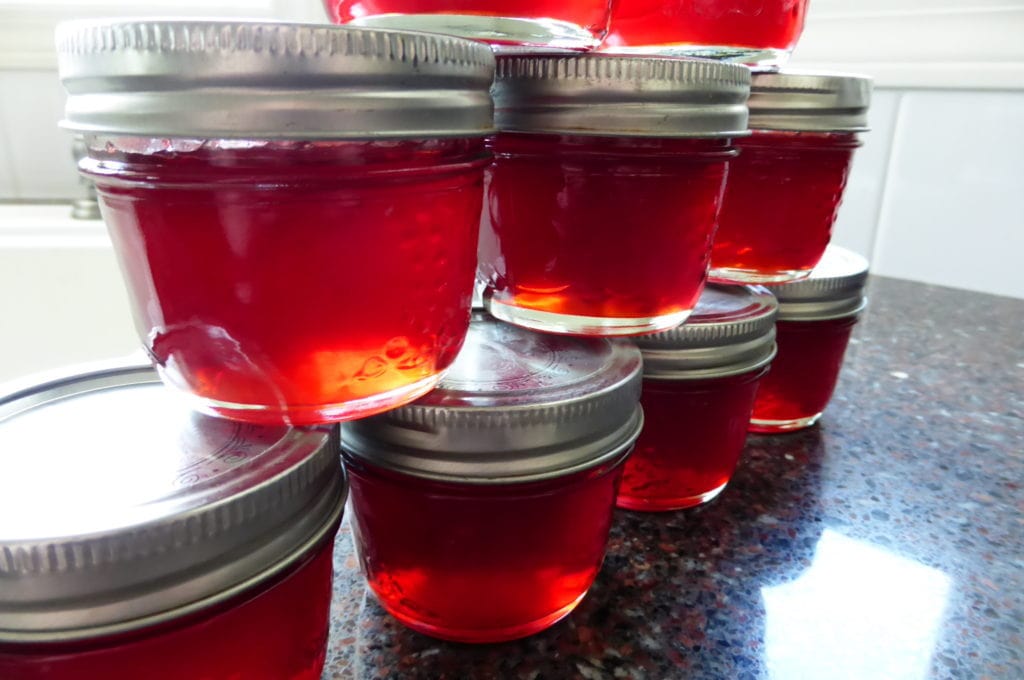 Meanwhile, I decided to make the rest of the scant 2 cups of nanking cherry juice into a syrup for pancakes. This is where the irony sets in (pun intended).  I boiled up the juice with a cup of sugar and about half a cup of amaretto. I let it simmer for about 20 minutes and then shut the heat off and forgot about it until after dinner. When I went back to have a look…they damn syrup had set!! So, my jelly was like syrup and my syrup was like jelly. Some days you can never win.

This morning I carefully scraped all of the un-set jelly out of every jar into the jelly pot, washed all the jars, lids, and rings and sterilized everything again. I added half a package of powdered pectin at the beginning when the half jelly was cool and a cup and a half sugar after it had boiled. I let that jelly boil more fiercely than ever before and filled half of the jars, then re boiled the jelly and filled the other half.

Now I am sitting here with coffee typing this post and listening to the odd ‘pop’ of jars being sealed. Music to my ears.

Other Cherry-licious Recipes from Dish ‘n’ the Kitchen