Football season is upon us and that means stinky protective padding, grassy cleats and interrupted mealtimes. It also means that I get to spend a couple of hours in the warming sun watching kid number one have the time of his life. After a long month of daily practices, Saturday was finally time for the first charity ‘jamboree’ with proceeds going to Ronald McDonald house. All this is new to me, as kid number one is the only kid who has chosen to do football so of course I have a lot of questions. I found out a jamboree is basically a chance for the boys to run their plays in a mini game setting. Each team gets ten downs, then they switch. They only use a half of a field and there’s no hitting involved. So easy on the parents too. I’m not entirely convinced I’m happy about him being in harm’s way and it’s highly possible I’ll be one of those moms that runs onto the field the first time he gets hit. First we need to survive the weekend and find out if he makes the team or not. Finger’s crossed!

The great thing about football is that the games are all played at Shouldice Athletic Park, a short drive from several restaurants that I’ve been dying to visit or want to re visit. After the Jamboree was done, we made a beeline for NOtaBLE.  My main reason for the return visit was to show my appreciation for all they did during the devastating floods in June. They were very close to the flood zone but were unaffected, save for the loss of power for a couple of days.  Owner and head chef Michael Noble has an amazing sense of community and felt that his restaurant could help others in need. Several gratis dinner spots for flood refugees were opened each night for several weeks after the initial flooding. There is no doubt this chef has heart.

It should come to no surprise that kid number one was starving after playing football from 9-12. He didn’t hesitate to order the burger feature; house made sesame bun, pork/beef patty, lemon aioli, butter lettuce, beefsteak  tomato, sweet pepper relish and friulano cheese.   He ran out of ketchup really fast and was able to flag the waitperson down to get another…then he had the brilliant idea of requesting the delicious lemon aioli that they had on the burger…even better with fries! 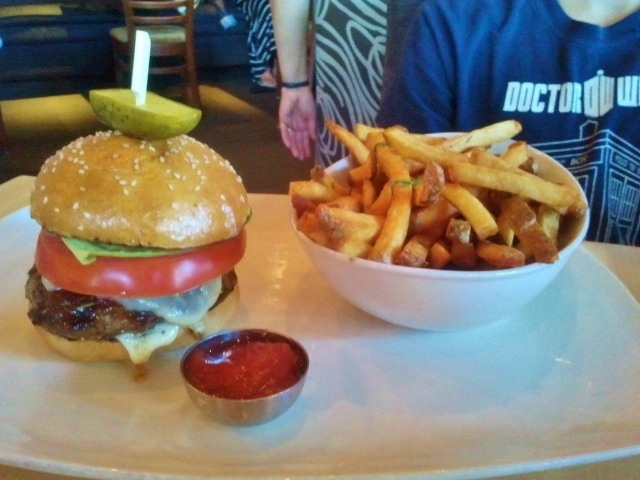 With a burger that looks that good, who could resist it? I ordered it too, but of course I had it with a side salad instead of fries. It is a mother’s priority to steal fries from her children. 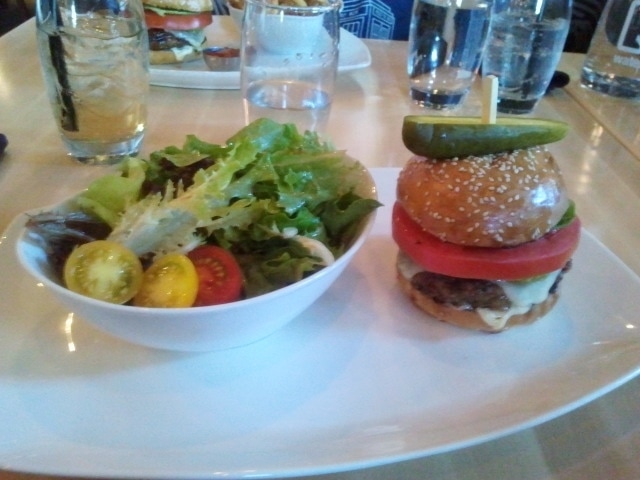 Hubby was happy to see breakfast on the menu since he just had a quick slice of toast on his way out the door to the football field. He ordered the Eggs Benedict with rosemary ham and a brown butter hollandaise served on a cheddar scone. 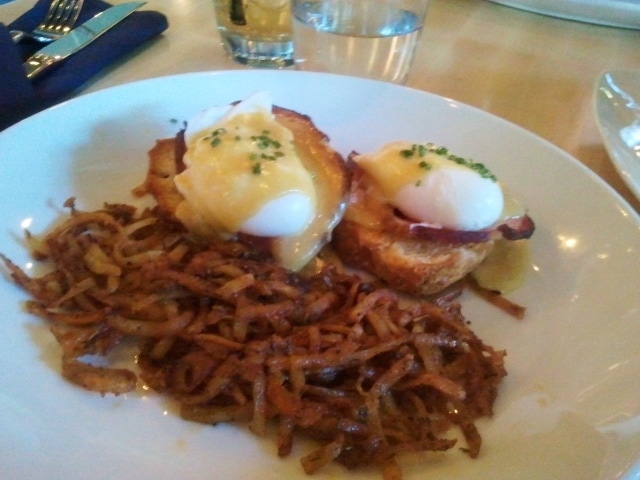 This being a important event and all we decided to order and share dessert (like we need an excuse!)  I had the myer lemon tart with raspberry sorbet and grapefruit marmalade. Everything was so tasty, eating the sorbet was just like popping raspberries into your mouth, minus the seeds and that marmalade was unforgettable. Perhaps they should put that on one of their burger features! 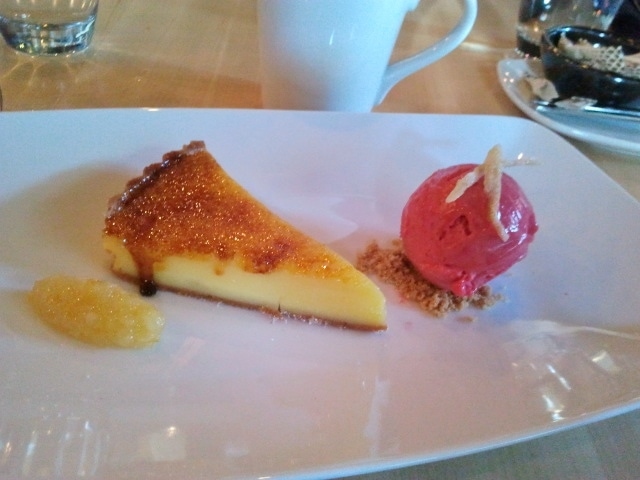 We had a couple of bites and let our growing boy finish off the rest. He was happy for the rest of the day.