Now that Dish ‘n’ the Kitchen is fully into the second year of madness, I can look forward to writing about ‘annual’ events and happenings around town. Of course my very first ‘foodie’ event was the Top Chef Trevor Bird event at Jerome’s Appliance Gallery. I heard about this year’s event through twitter and manage to secure two tickets to the event through eventbrite. The whole thing was like deja vu only this time I wasn’t as shy about getting in there to take photos. Maybe a year’s experience has given me a bit of confidence to put myself out there. I don’t know. I do know that it was really great to see some familiar faces there, like local foodie celeb and event emcee John Gilchrist, Jessica Curran (Jerome’s daughter), and of course Jerome himself. I said it before and I’ll say it again, Jerome is one personable guy. 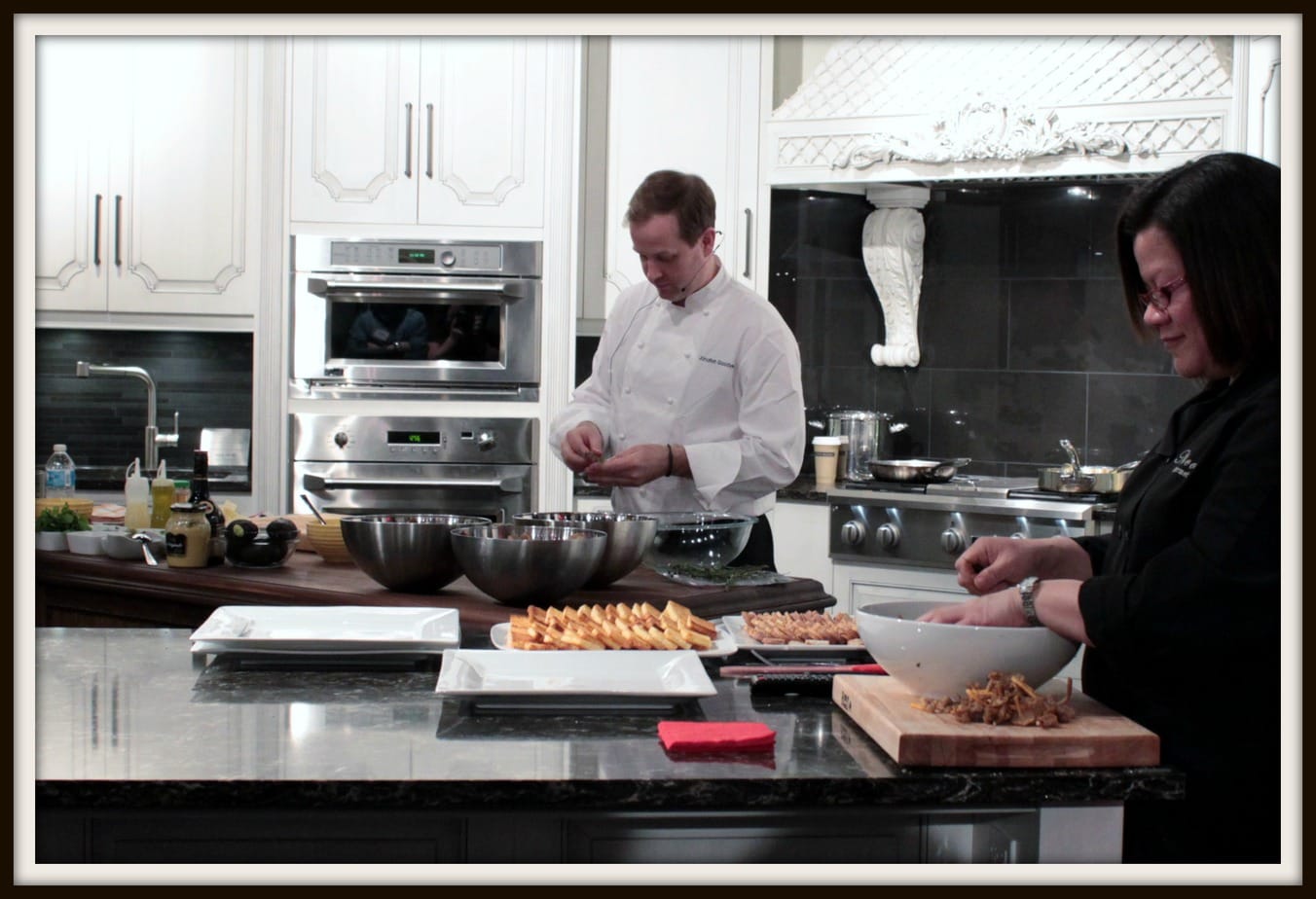 I knew last season’s Top Chef runner up, Jonathan Goodyear was going to be there (obviously) but I didn’t know that I was going to finally meet Nicole Gomes, one of Calgary’s own Top Chef contestants. I’ve been just missing meeting her for a while now and today was finally the day. I admire her canny attitude and creativity in the kitchen. She’s really good at thinking on her feet and being super organized. MyHubby came along for the ride (and the food) but he was especially helpful at being my very own paparazzi. He snapped a decent photo of Nicole and I after the event. 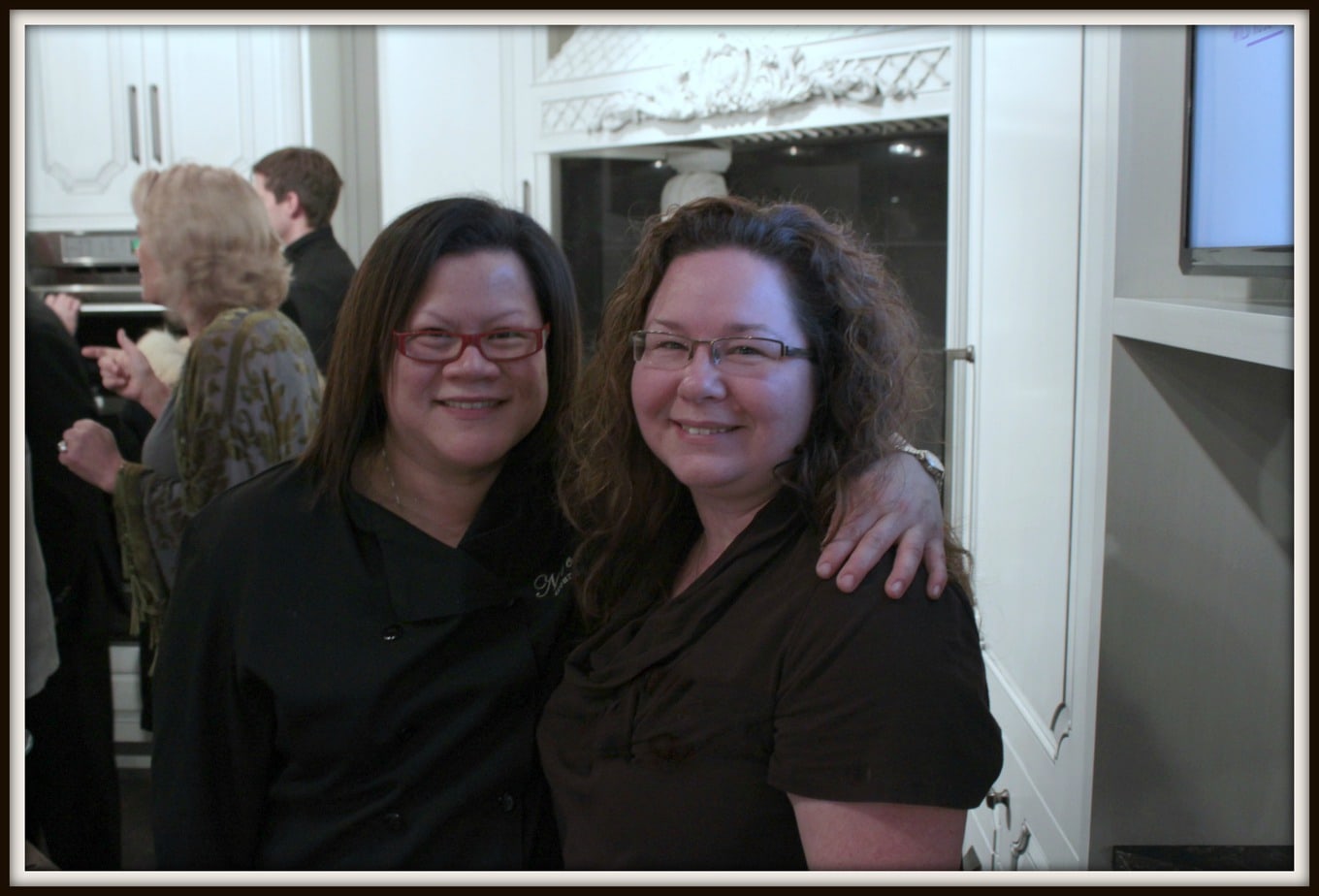 Now for the food. The cooking was done using all GE Monogram appliances like the ones used on Top Chef Canada. These are some amazing appliances and as Jonathan mentioned, it is important to have dependable appliances that won’t let you down whether you are cooking for a living or cooking a special meal for your family. I have to agree and I understand completely. I am due for a new oven..we’ll just say mine has gone past the stage of being safe. The inner racks collapse when I put something heavy on them and not all of the burners work to capacity. It makes cooking a meal unbelievably difficult and very frustrating. I hope that next year when I write about the next Top Chef event I will have a dependable oven of my own! The first thing Jonathan did was cover a huge beef tenderloin with garlic and butter and zap it in a microwave. Or what looked like a microwave. In fact it was the GE Monogram Advantium wall oven with Speedcook technology that “combines high-intensity halogen light with ceramic and radiant cooking elements to rapidly cook the outside of foods, sealing in natural juices. At the same time, microwave energy works to evenly cook the inside. It delivers delicious results up to eight times faster than a conventional oven, and no preheating is required.” Pretty amazing. What’s more amazing is that the huge beef tenderloin was ready in about 25 minutes. While we were waiting for the tenderloin to cook, Nicole plated up some Steak Tartare that Jonathan had mixed together before the event. Premium hand chopped (not processed) beef, tiny diced cornichons, capers, egg yolk, salt and pepper all combined to make a delicious start to our afternoon. 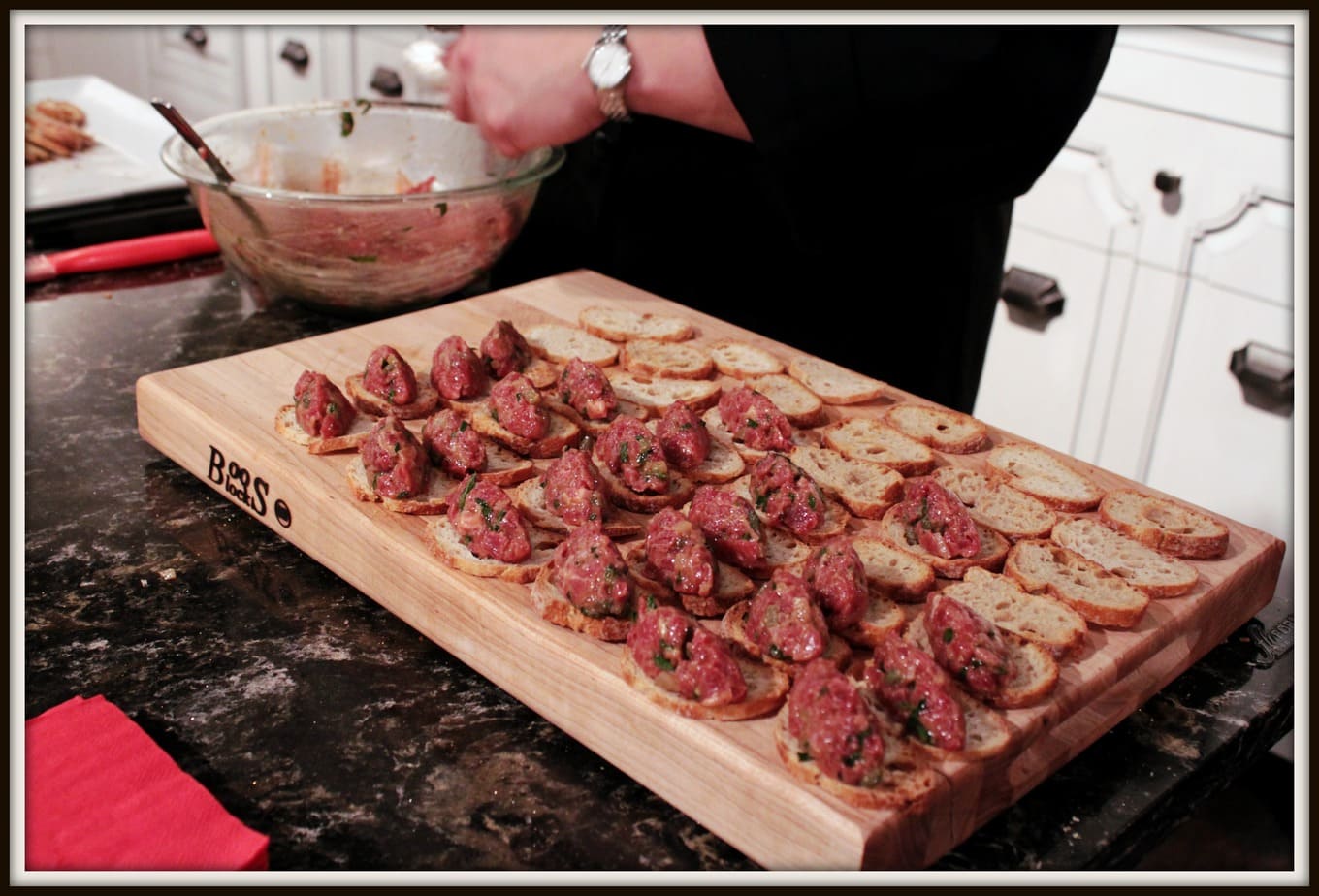 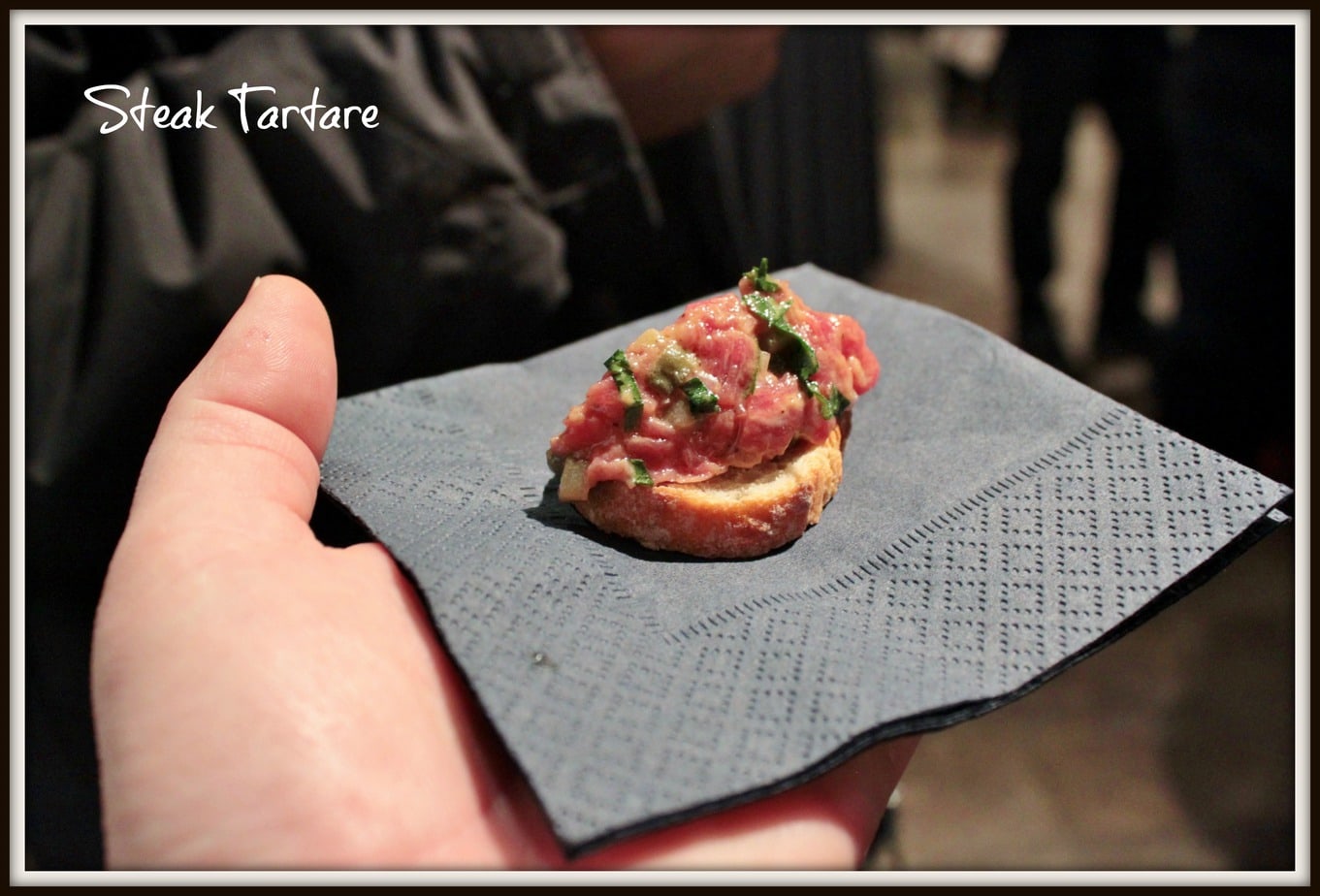 While Nicole was plating up the Tartare, Jonathan was putting the finishing touches on the Scallop Crudo, a light take on ceviche which really doesn’t take a long time to make. He basically mixed the scallops with some citrus juice, salt, and a bit of oil and let them sit in the refrigerator while he got the rest of the elements ready. The Scallop Crudo was served with mashed avocado spiced with sambal oleck (chili garlic paste), black bean salsa, red onion, a jalapeno slice, and blood orange. 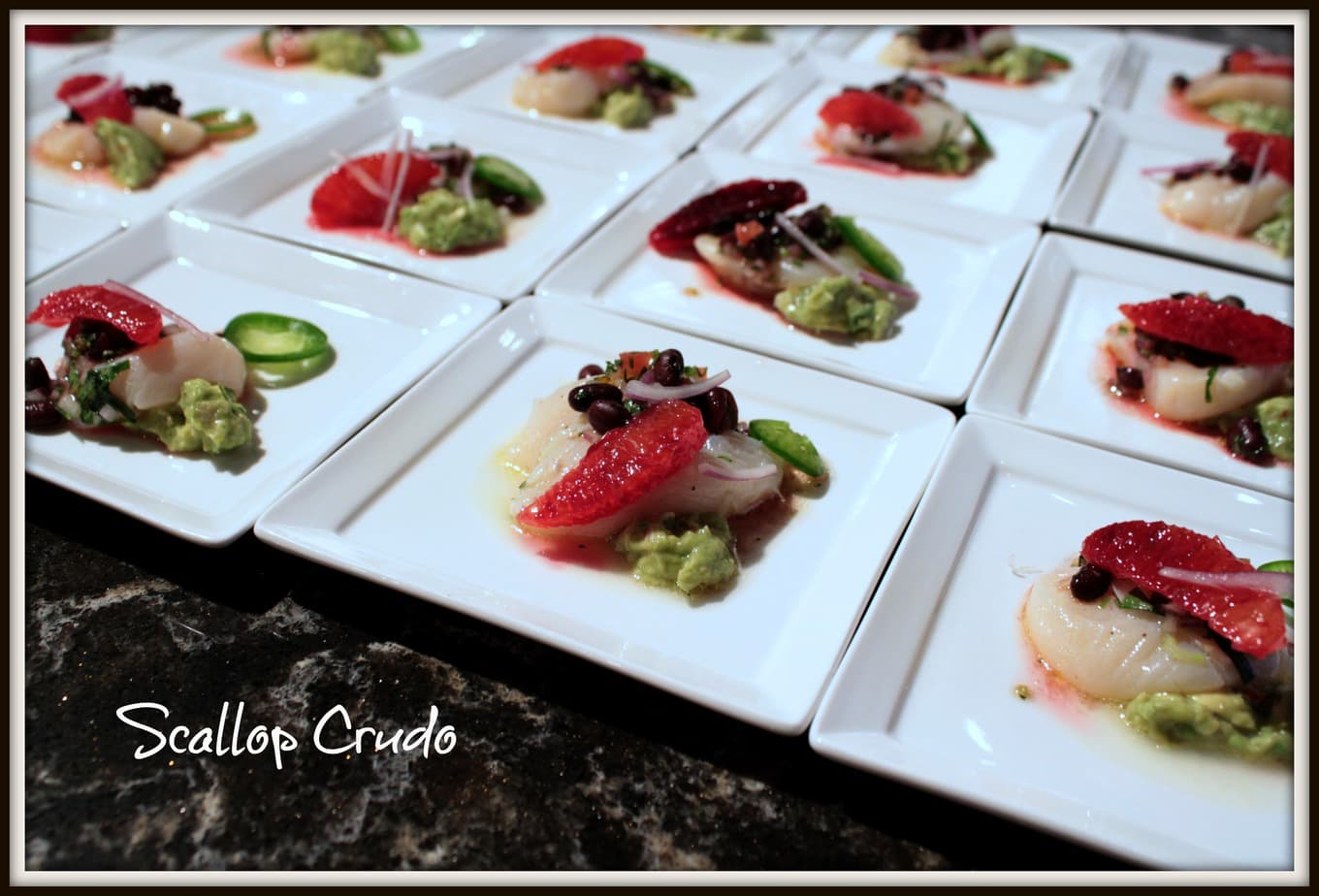 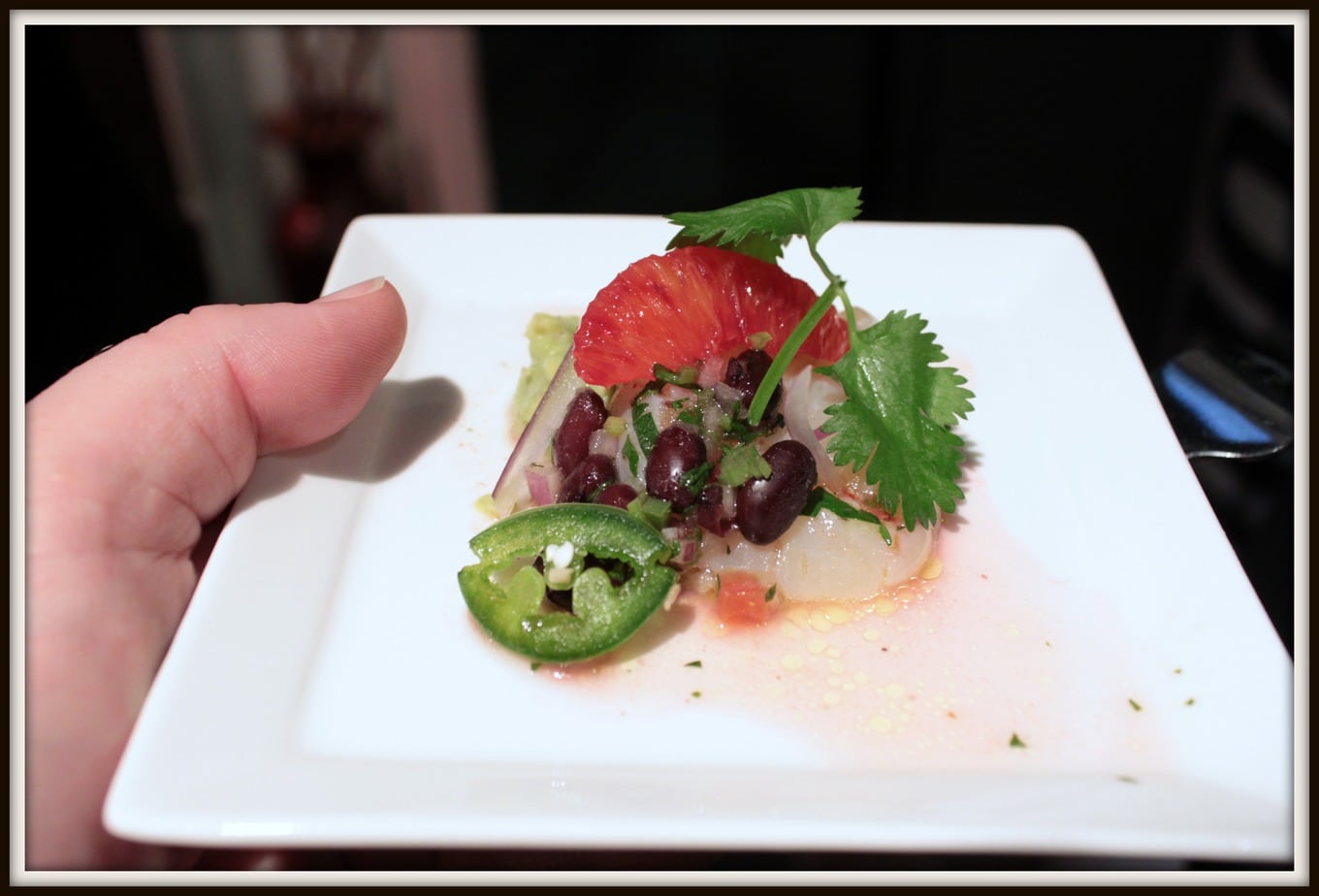 After we had tried the Tartare and Scallop Crudo, the beef tenderloin was well rested and ready to be plated with some sauteed mixed mushrooms and shallots. The tenderloin was cooked to perfection and very tender and flavourful. 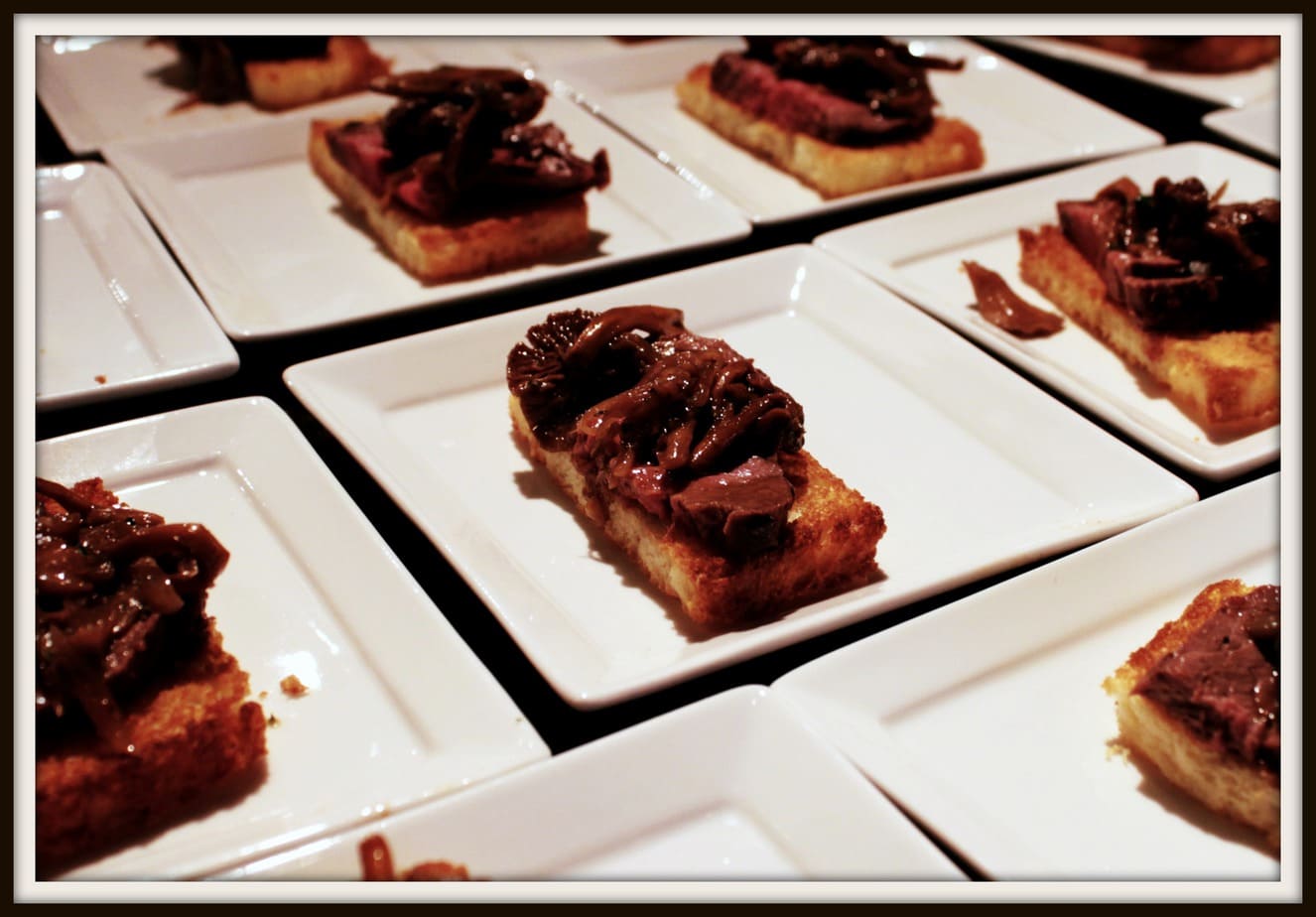 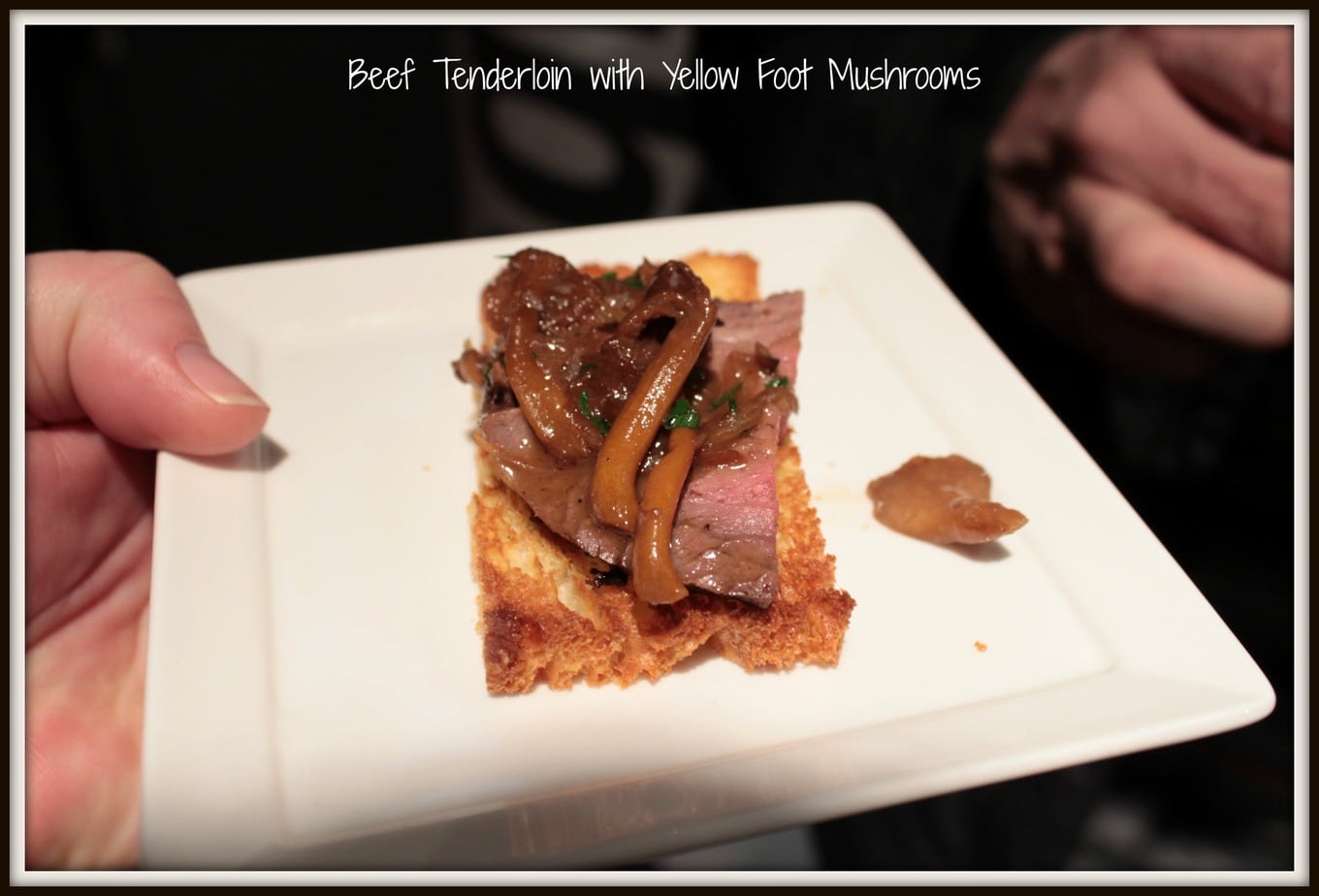 I think you can probably tell how delicious it was just by looking at the photographs. It truly was as good as it looks. 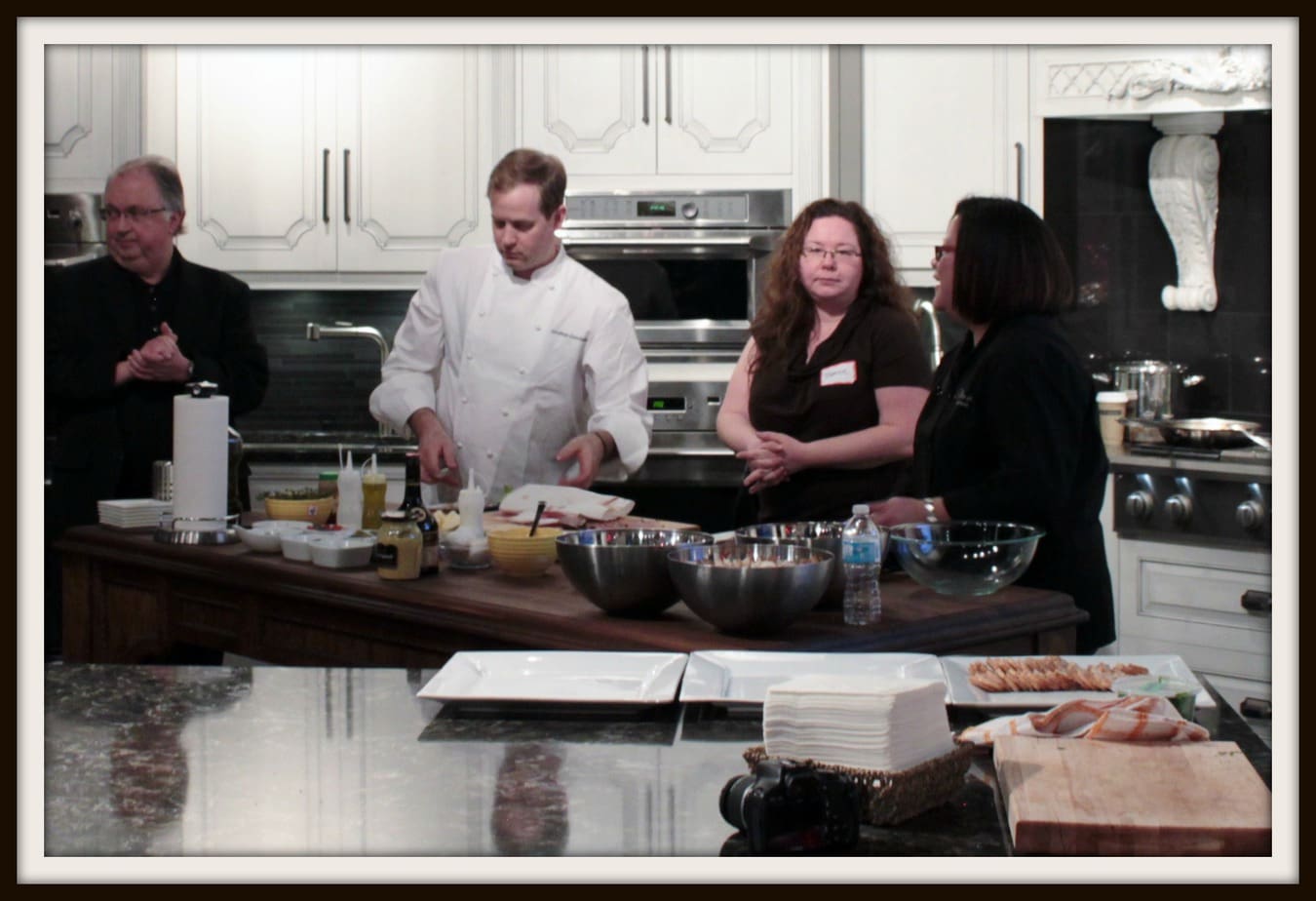 After the event I snuck into the kitchen while hubby took this photo of John Gilchrist, Jonathan, myself, and Nicole. Hey, it kind of looks like they let me be their sous chef, right?