The cat is out of the bag….we’re heading off the New Orleans in a week! I can’t even explain how excited I am to get out of this cold weather and go somewhere where the air doesn’t hurt my exposed skin. I’m making a list of all the local food I need to try and as it looks right now I’ll probably spend all of my time eating.  I’m going to try char grilled oysters, a mufalletta, one (or two, or three) po’ boys, gumbo, beignets, turtle soup, etouffee, and stuff myself silly with crawfish and crab.

I have not had a lot of exposure to Southern food so I decided to try to make some Southern BBQ shrimp. I was thinking it would be an easy introduction to the Southern style of cooking but boy was I wrong. I should have known better than to start with one of Emeril’s recipes because I have actually used a couple before and I thought they were meant for someone who employs a sous chef. Guess I forgot all that when I found his recipe for BBQ Shrimp. It looks easy. Spice, cream, shrimp. How hard could it be? In fact, it looked so easy I wasn’t going to take pictures or blog about it. Boy was I wrong. Now I wish I had taken more pictures! If you have 1.5 hours to make a shrimp dish…pick this one! 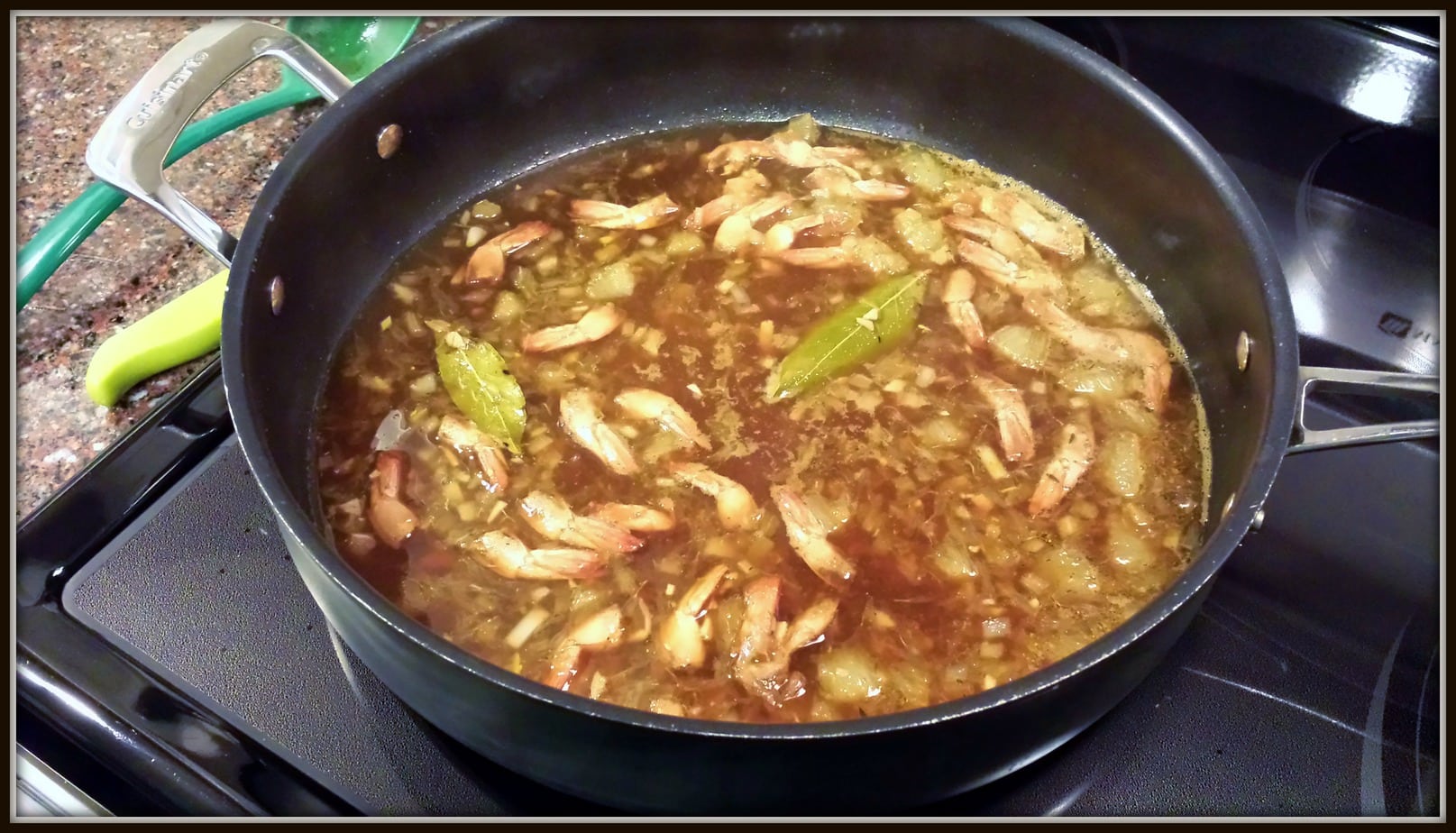 This is the first reduction with water, wine, creole seasoning, Worcestershire sauce, bay leaves, onions, garlic, lemons, and prawn tails. I ended up cutting the recipe in half as I only had about a pound (400g) of shrimp so I had to watch I didn’t over reduce the sauce. If you are only doing half make sure to adjust your reduction time accordingly. I tasted the sauce several times and thought it was a bit on the sour side probably because of the lemons and the Worcestershire but also because I used smaller shrimp and only had their tails to add to the sauce. I decided against adding some sugar until the final sauce was made. I thought it was pretty funny that kid number two caught on to this naturally and mixed some sweet corn into the finished product in her dinner bowl.  And a final note, I didn’t add the extra butter to the cream sauce. Shame on me! 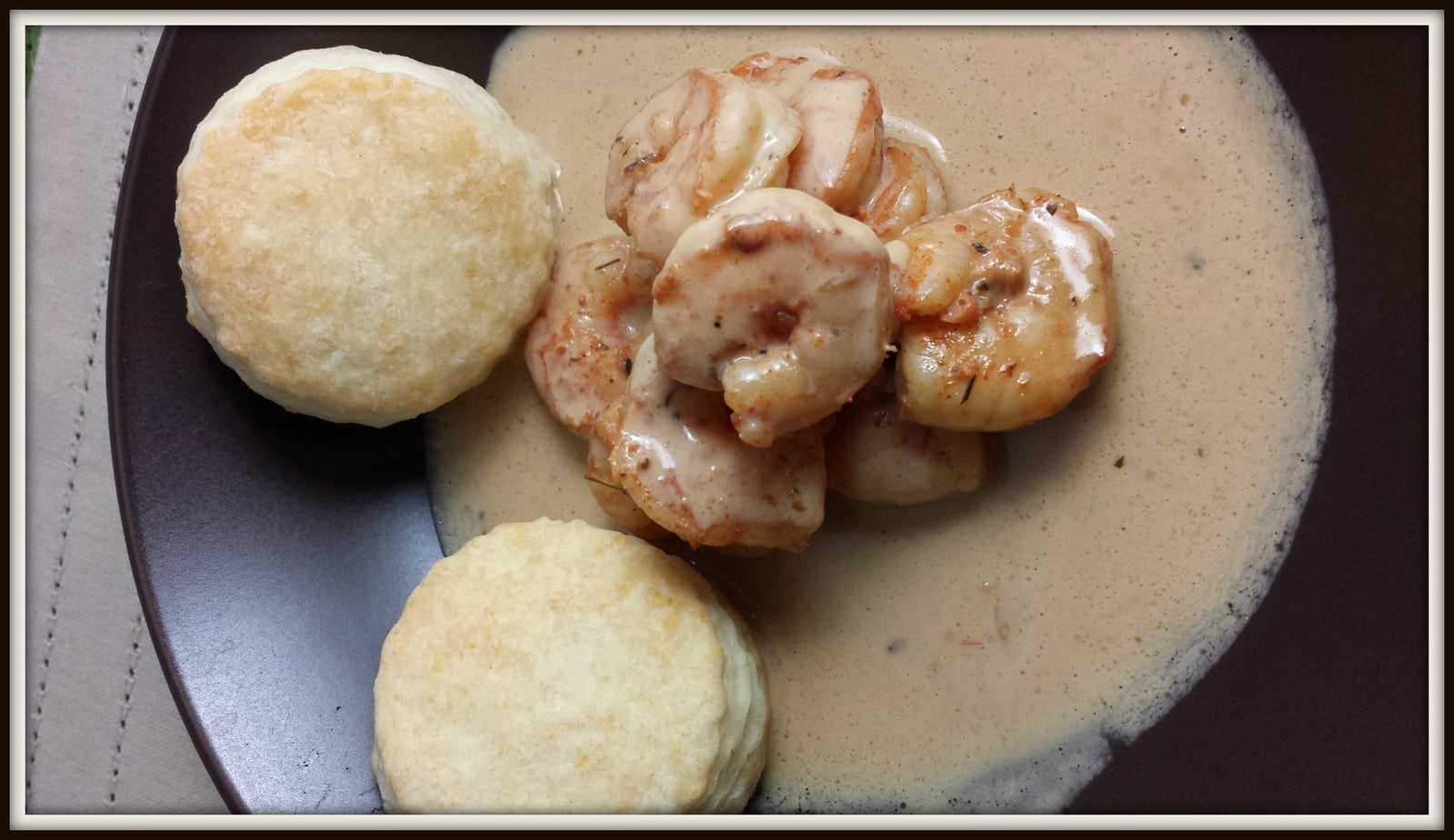 Heat 1 tablespoon of the oil in a large pot over high heat. When the oil is hot, add the onions and garlic and saute for 1 minute. Add the reserved shrimp shells, the remaining Creole seasoning, the bay leaves, lemons, water, Worcestershire, wine, salt, and black pepper. Stir well and bring to a boil. Reduce the heat and simmer for 30 minutes. Remove from the heat, allow to cool for about 15 minutes. Strain into a small saucepan. There should be about 1 1/2 cups. Place over high heat, bring to a boil, and cook until thick, syrupy, and dark brown, for about 15 minutes. Makes about 4 to 5 tablespoons of barbecue sauce base. Heat the remaining 1 tablespoon of oil in a large skillet over high heat. When the oil is hot, add the seasoned shrimp and saute them, occasionally shaking the skillet, for 2 minutes. Add the cream and all of the barbecue base. Stir and simmer for 3 minutes. Remove the shrimp to a warm platter with tongs and whisk the butter into the sauce. Remove from the heat. Mound the shrimp in the center of a platter. Spoon the sauce over the shrimp and around the plate. Arrange the biscuits around the shrimp. Garnish with chopped chives.

Note: I didn’t have dried onion powder so I skipped it. It didn’t seem to matter.

Preheat the oven to 400 degrees F. In the Kitchenaid mixer bowl, combine the flour, baking powder and salt. Mix well. Cut in the butter while the mixer is on and keep it going until the mixture resembles coarse crumbs. Stir in the milk. The dough will be sticky. Dust your work surface with some flour. Turn the dough onto the floured surface. Gently fold each side toward the center. Pick up the dough and dust the work surface with additional flour. Return the dough to the floured surface and fold each side towards the center again. Turn the dough over and press it out to 1-inch thickness. Cut the biscuits, straight down, do not twist the cutter, with a 2 1/4-inch round cookie cutter. Melt the remaining tablespoon of butter and add to a 10-inch round cake pan. Place the biscuits in the pan, turning once (to coat both sides with butter), about 1/4-inch apart. Let the biscuits rest for 15 minutes before baking. Bake until golden brown, about 15 minutes.