When faced with the subject of this month’s A Canadian Food Experience Project I was a bit uncomfortable and unsure of what I was going to write about. Resolutions and the New Year go hand in hand like peanut butter and jam BUT by the time March rolls around many people forget about the changes they resolved to make in their lives…much like many who lived through the disco era try to forget disco even existed. Many resolutions don’t even make it to March and I have witnessed this first hand. Going to the gym is probably my prime example. I used to go all the time and in January and February the place was packed with good intentions. I would smile to myself and wish them all luck knowing that eventually they’d disappear one by one.

It’s no secret that I *should* be going to the gym again. I’ve slowly gained back all the weight I lost and to be honest I feel like crap. I guess that’s why the subject of resolutions made me uncomfortable… because of what I should be doing, but am not. I know I can do it, but starting a weight loss program as a New Year’s Resolution just seems so cliché. If I’m going to do it I don’t need some random change in time to push me towards a goal. I need to make those goals on my own because I just don’t like being told what to do. Stubborn? Yes. Truthful? Yes. I’ve laid it all out for you here as much pain as it has caused me.

Of course I don’t blame myself. I blame the long, cold Canadian winter (I just had to make this Canadian!). Who wants to start an exercise regime when it’s dark when you wake up and dark at 4:30 pm? We’re naturally programmed to hibernate! And, who wants to start a diet during the cold winter months when hearty soups, braises, baking, and comfort food reign supreme? We all crave these things because we Canadians get through the winter with an extra layer of….fat. You may laugh but it’s true. So why start the New Year with a health resolution that is doomed to fail? Just don’t. Do it when you are ready and I guarantee you will be much more successful.

So…what am I doing about this New Year’s Resolution thing? Easy, achievable goals are the key to making me feel like I have actually accomplished something.

So, here it is. This recipe for Chicken-Tomatillo Fajitas checks off four of the above mentioned resolutions AND coincidentally also seems to be a bit diet friendly. Imagine that!

1 large can of tomatillos with liquid (Tomatillos? Resolution #2)

1 magic chicken, meat shredded (I bought mine from Costco and needed to be used up, resolution #4)

1 jalapeno, chopped (Wow, thank goodness I tried my jalapeno first! One taste and I was literally on fire. I tried to sooth my lips on a package of frozen spinach. I very finely diced about a teaspoon and used that)

half of an onion, diced

3 cloves garlic, crushed. (this is Canada in flu season. I used 4 cloves)

salt and pepper to taste

pico de gallo (diced tomatoes, red onion, garlic, and cilantro. Topped with a glug of EVOO and juice of one lime. SALT)

I still had the Bellini Kitchen Master and I thought this was a good recipe to make using the machine.

Start by chopping the onions and sautéeing them. When they get a bit soft, add finely diced garlic and continue to sautéfor another minute. Add the can of tomatillos, liquid and all. Add the bouillon. Cook for about 15 minutes, then add the avocado and cook for another 10 minutes. If you are using a BKM or Thermomix, blend everything together, if not, break out your trusty immersion blender. Add the shredded chicken meat and cook until the meat is up to temperature then add half of the cilantro. Cook for another 5 minutes and serve on warmed tortillas with the remainder of the cilantro, some pico de gallo, and sour cream. 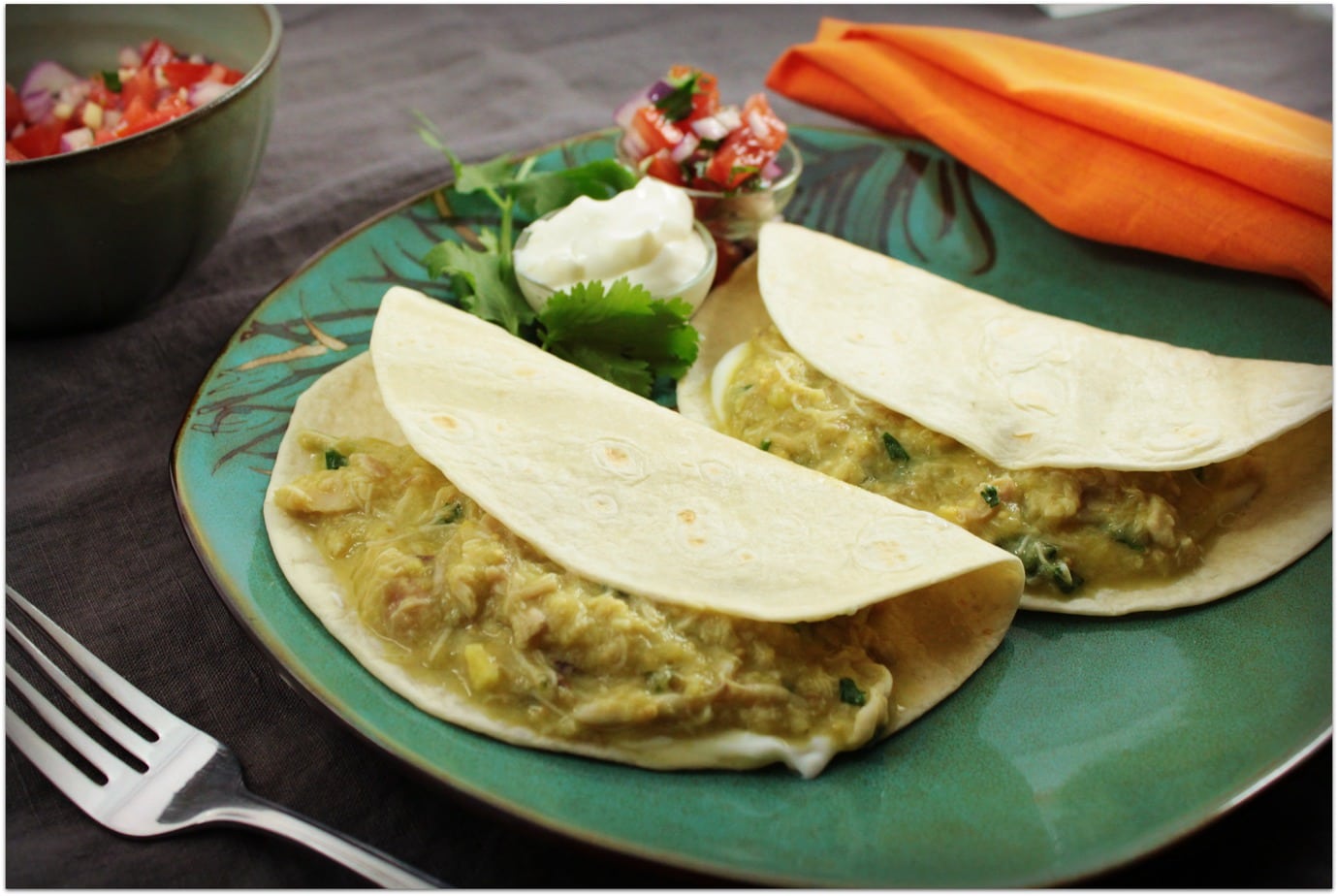 I am writing this post as part of my contribution towards the Canadian Food Experience Project that began in June 2014, where a group of Canadian Food Bloggers and writers share collective stories through our regional food experiences in the hope to bring global clarity to our Canadian culinary identity. Huge thanks go to Valerie Lugonja (A Canadian Foodie) spearheading this project and for her dedication. Thanks Valerie!

Around the World in Twelve Plates – Peru