After enjoying cooking my dish for the first ‘Around the World in Twelve Plates’ installment (Chinese Red Cooked Beef), I felt I couldn’t pass up the opportunity to sign up for the second round of adventure in February. As I waited eagerly for The Food Girl in Town‘s  announcement of the next world cuisine, several subliminal suggestions ran through my head…how about Hawaiian, or Sri Lankan? Could the next country be Spain, or how about Iceland? Truly, I had no idea where I would be cooking from next. Then the announcement came and it was a bit of a shocker: Brazil.

I immediately started running through what I know about Brazilian cuisine in my head. It didn’t take long. Calgary has several Brazilian steakhouses and so I am familiar with the rodizio style of dining where you dine on all you can eat churrasco (grilled meat) which is served table-side and sliced directly onto your plate. I’ve been to a couple of these places and I was pretty sure I wouldn’t be able to pull off a similar meat-fest at home, especially in the dead of winter.

During the 2014 World Cup held in Brazil, I watched countless hours of ‘the beautiful game’ and found myself getting hungry, or more accurately, thirsty for an authentic Brazilian caipirhina, which is a cocktail made with Brazilian rum, cachaça, fresh fruit, and a bit of sugar. It takes a fair amount of muddling, but all that work is certainly worth it. However, this is a food post, not a cocktail post so my limited experience would not do. I had to investigate further. A quick check at my closest Chapters, revealed absolutely NO suitable cookbooks at all. My next stop was the library and I had a bit more luck there, but after searching there were really only 3 books in the whole system, and only one of them was available. I put Brazilian Food (by Thiago Castanho) on hold and waited for it to arrive at my branch for pick up.

It was pretty evident that ‘Brazilian Food’ was by no means a beginner’s guide to Brazilian cuisine. It features regional specialties and recipes by local chefs and did not really explain any basics like ‘what the hell are dried salt shrimp’?! It took a fair amount of browsing before I was confident enough that I could make one of the recipes; Vatapá da Maria Helena (Maria Helena’s Creamy Shrimp and Coconut Stew). Maria Helena is a cook at Remanso do Bosque restaurant, but this dish is more of an every day average dish you might find on the streets of several more Northern Brazilian states, and especially in Bahia. This north east Brazilian state has a lengthy coastline and seafood is a main staple in this region. Like many countries, Brazil’s cuisine is not an entity on it’s own, but a mosaic of flavours which reflects the country’s immigrant heritage combined with indigenous tradition. This Creamy Shrimp and Coconut Stew is of African origin, but uses Brazilian ingredients such as dried salt shrimp, colorau (ground annatto), and dendé (red palm oil). It wasn’t an easy task finding these ingredients and I went to several places before I had rounded up every one. With some help from an Asian friend I was able to source the right kind of dried salt shrimp at a Korean store, I found the red palm oil at a health food store, and eventually sourced the annatto at a nearby Mexican supermarket. 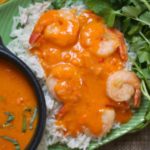 0.0 rating
It's worth searching out the dried salt shrimp, colorau, and dendé.

Soak the dried shrimp in lots of cold water for about 4 hours. Drain, then add to a blender with 4 cups fresh water. Process until smooth. Transfer to a saucepan and simmer for 10 minutes to make a flavourful shrimp broth. Remove from heat and strain. Tear the baguette into small pieces and add to a bowl. Pour coconut milk and 3/4 cup water over the bread and allow to soak for 20 minutes. Heat the olive oil in a large pan. Add the onion, garlic, tomato, and chili pepper and sauté until softened. Add the bay leaves and the shrimp stock and heat until it begins to simmer. Gradually add the soaked bread mixture to the pan, stirring constantly. Cook 5 minutes until thickened or unit lit reaches a sauce-like consistency. Add the shrimp, cumin, colorau, dendé oil, and some black pepper. Reduce the heat and let it cook for 4 minutes or until the shrimp is cooked through. Add the fresh herbs and season with a bit of salt, taking care not to add too much so that the sweet flavour of the sauce is masked. Serve over Brazilian style white rice.

The original recipe made enough for ten people so I halved all the ingredients (but strangely, doubled the rice!) for our small family. We enjoyed the flavour of the sauce, though the boys were a bit disappointed because they thought they were getting a curry. I picked this dish for it’s simplicity and colour, and it did not disappoint. The combination of the ground annatto and dendé oil really made this dish unique and beautiful (though I understand now why people buy it pre-ground, it’s worse for staining than turmeric!). The sauce is very subtle and sweet, with a great texture achieved by using the bread as a thickener. I would make this again, and might have to since I have plenty of ingredients left over in my pantry.

I spoke with chef Joao Dachery (from Pampa Brazilian Steakhouse) a few days later and he was impressed with the colour on the stew (of course I showed him a photo!) and gave me some important tips on cooking with dendé oil, mainly that it has a very low smoke point, so it is important to add it at the end for flavour and colour. He also told me I should try to make Moqueca, which is another typical Brazilian fish stew. Now I know what to do with the extra ingredients!

Make sure you check the rest of the amazing fellow bloggers that met the challenge for “Around the World in 12 Plates, Brazil”: